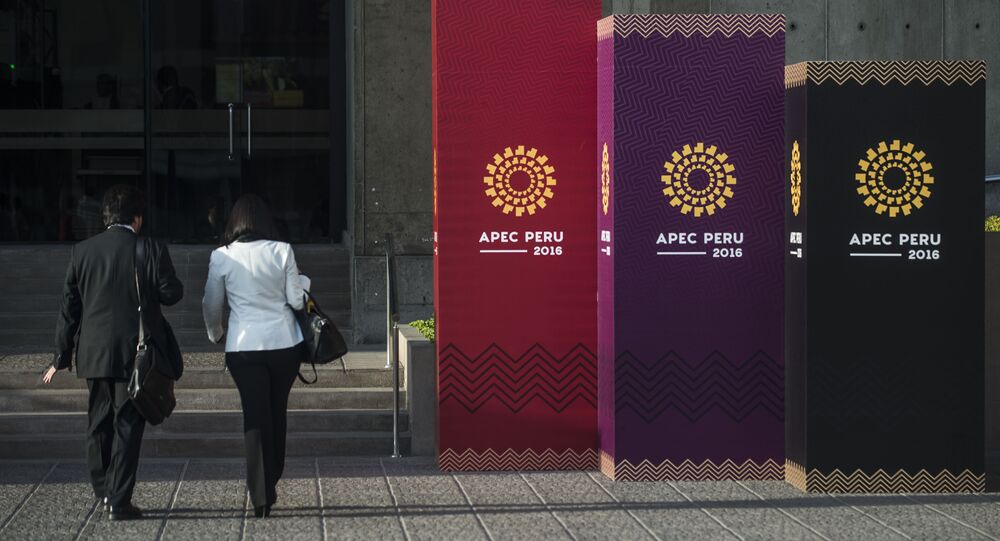 The APEC summit in Lima wrapped up on Sunday with leaders shifting focus from the rise of protectionism, which was expected to be the main topic, to the idea of fostering connectivity across the region.

© AFP 2021 / Rafael ZARAUZ
APEC Leaders Extend Moratorium on Protectionist Measures Until End of 2020
LIMA (Sputnik) – The idea of Internet access as an essential tool for achieving economic prosperity was introduced at this year's summit by Facebook, which has never before been so active at APEC.

The social network's founder, Mark Zuckerberg, arrived in the Peruvian capital to address the leaders of 21 economies with an impressive presentation on the development of human potential through Internet and to meet with some leaders, including the Peruvian president, face-to-face.

Zuckerberg's "Connectivity Revolution" project intended to introduce a new way of providing Internet access to remote areas or impoverished places with no infrastructure via drones by sending a laser signal.

During this week's summit the topic of connectivity has been repeatedly raised at leaders' meetings and was even enshrined in the final declaration.

The leaders also welcomed the work that has already been done by various fora and working groups to promote connectivity, but said challenges still remained.

"We reaffirm, therefore, our commitment to the overarching goal of a seamlessly and comprehensively connected and integrated Asia-Pacific by 2025," the final document read.

Nevertheless, the most expected topic on the agenda of the Economic Leaders' week was supposed to be the growing protectionism and the likely collapse of the Trans-Pacific Partnership agreement (TPP).

Victory of Donald Trump at the presidential election last week marked a potential major turn to protectionist policies in the United States.

People's concern over the rise of protectionism is the key factor curbing economic growth across the Asia-Pacific, according to the annual "State of the Region" report released earlier this week by the Pacific Economic Cooperation Council (PECC).

Trump's upcoming presidency put the future of the TPP into question after he called it a "disaster" during his campaign and said he would block it.

In this light, China pushed for the Free-Trade Area of the Asia-Pacific (FTAAP), which is seen as an alternative to TPP, at this year's APEC events.

© REUTERS / Kevin Lamarqu
Putin Speaks With Obama on Sidelines of APEC Summit - Kremlin
As a result, APEC leaders endorsed the collective study on the possibilities of creating the FTAAP, which automatically means the start of the negotiations. They also agreed to examine current pathways to the realization of FTAAP by no later than 2020.

Among other topics laid down in the Lima Declaration was cooperation in fight against terrorism through sharing experience, as well as commitment to eradicate corruption and to double the share of renewable energy by 2030.

Apart from being a platform for joint sessions, APEC gave the leaders an opportunity to hold a number of bilaterals. Russian President Vladimir Putin met with outgoing US President Barack Obama, Japanese Prime Minister Shinzo Abe, Chinese President Xi Jinping, as well as leaders of Peru, Chile and the Philippines.

At the end of the summit, Vietnam took over the APEC chairmanship.