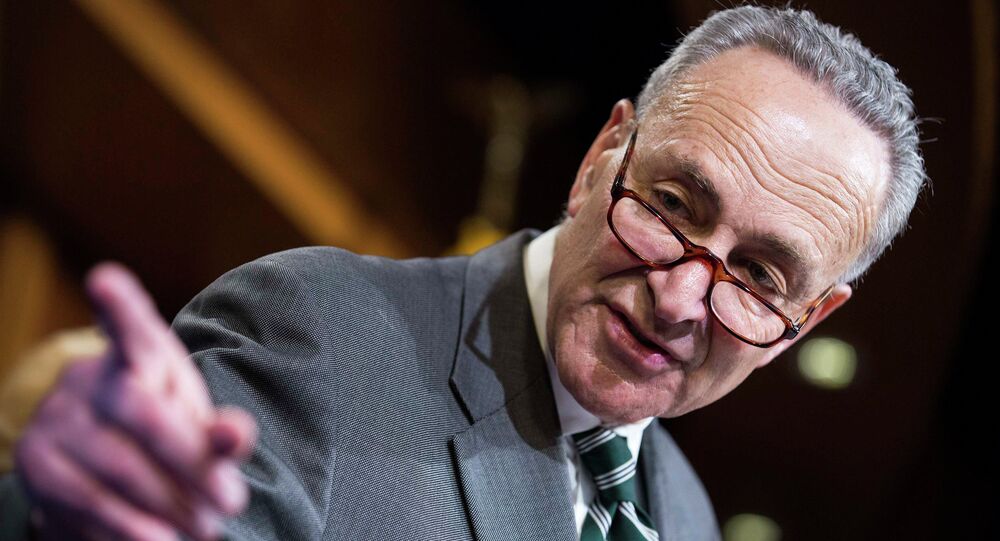 "Surprisingly, on certain issues, candidate Trump voiced very progressive and populist opinions. For instance, getting rid of the carried interest loophole. Changing our trade laws dramatically. A large infrastructure bill. Cleaning up the swamp in Washington. These are things the Democrats have always stood for."

Schumer said he would challenge Trump to cross party lines and work with Democrats on issues like trade and infrastructure, and to fulfill the progressive promises he made to "blue collar America."

"But on issues where our values are at stake … we’ll go against him with everything we’ve got," Schumer warned. The president elect will get no help in repealing the Affordable Care Act, for example, or the Dodd-Frank Wall Street Reform bill.

"We're not going to help him build his wall. We have a comprehensive immigration reform bill that builds in much tougher border security and it had bipartisan support than he’s ever called for. So we’re not going to oppose him just because it’s Trump. But we’re certainly going to stick to our values and oppose him wherever he opposes those."

© AFP 2021 / BRENDAN SMIALOWSKI
No Walkover for Trump: Despite Republican Congress Majority 'Not All are Trumpists'

Regarding the incoming president's cabinet, Schumer noted that Senator Jeff Sessions will not escape scrutiny in the confirmation process for attorney general. The Sessions pick is generating uproar among Democrats for his history of opposing civil rights legislation, including voting rights laws, and supporting harsh drug sentencing laws that disproportionately affect African Americans.

Schumer said his colleague will still have to answer pointed questions about what he intends to do regarding American civil rights law and other issues. "So it's premature to make any decisions but, except to say a very thorough and tough vetting for a Senate colleague, as well as for anybody else," he said.

As Trump's prospective Cabinet takes shape, there are some surprise possibilities. Mitt Romney, former governor of Massachusetts and a 2012 Republican presidential candidate, met with Trump November 19 and is actively being considered for secretary of state.

Romney was unrelentingly scathing about Trump during the campaign, but apparently had a "warm and substantive exchange" with Trump during the meeting in New Jersey, Vice President-Elect Mike Pence said.

Democratic Representative Adam Schiff said November his party would “love” Romney as head of the State Department, but feared it was just a "head fake" by Trump, The Hill reports.

Trump Sunday morning praised Schumer and knocked his predecessor Harry Reid in a series of tweets. In the first, now-deleted tweet caught by the Washington Examiner, Trump said "I have always had a good relationship with [Schumer]. He is much smarter than Harry R and actually, far more cunning – gets things done!"

In a follow up, Trump deleted the “cunning” piece and called Schumer's new position "good news."

Can the Democrats Rebuild? Can Progressives Build a United Front?

Sanders 'Humiliated' by Democrats’ Lack of Connection With US Working Class