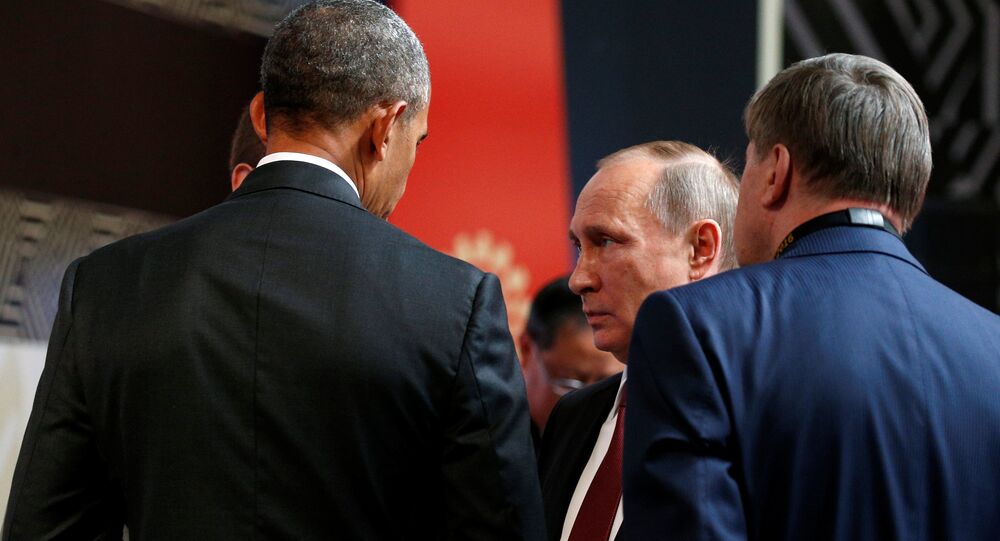 © Sputnik / Alexei Druzhinin
Putin, Obama May Meet in Lima Later on Saturday, on Sunday
LIMA (Sputnik) — Peru has been hosting APEC's all-year-round meetings that culminated with the economic leaders' summit in its capital city of Lima, which started on Saturday. During the summit, the leaders of the 21 APEC states are expected to work out a strategic vision and guidelines for economic cooperation in the Asia-Pacific region for 2017.

"At the beginning of the working session [Putin and Obama] greeted each other and spoke briefly," Peskov said.

Obama and Putin discussed Ukraine and Syria during their brief meeting and agreed that US and Russian top diplomats will continue discussing the ways to resolve the Syrian crisis, Peskov said.

"The presidents expressed their regret that no progress has been achieved in Ukraine. However, it was pointed out that the remaining two months [of Obama's administration] must be used to continue finding resolution for the Syrian crisis. In this context, it was agreed that Lavrov and Kerry will continue talks."

The White House also commented on the conversation. "Beyond pleasantries, the [US] President urged President Putin to uphold Russia's commitments under the Minsk agreements, underscoring the U.S. and our partners' commitment to Ukraine's sovereignty," the White House said.

"On Syria, the President noted the need for Secretary Kerry and Foreign Minister Lavrov to continue pursuing initiatives, together with the broader international community, to diminish the violence and alleviate the suffering of the Syrian people," it added.

Putin, Obama May Meet in Lima Later on Saturday, on Sunday