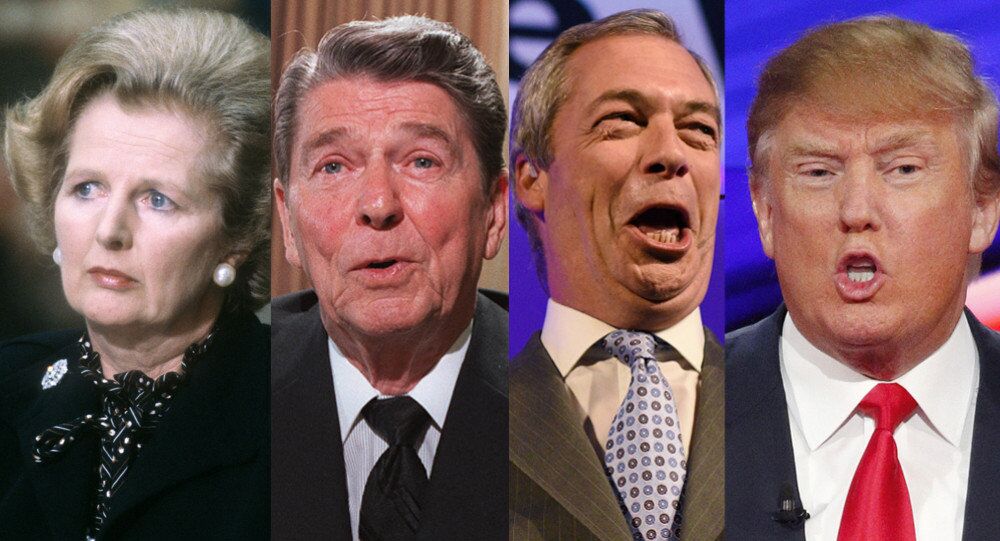 Authoritarian populism is an emerging force among voters across Europe and could be the defining political phenomenon of the next decade, according to a survey conducted by YouGov.

Authoritarian populism was a term coined by Jamaican-born cultural theorist Stuart Hall, who used it to describe Thatcherism. Hall argued that Thatcherism was a response to the post-war settlement and cynicism over human rights, anti-immigration and anti-globalization, with an anti-EU position.

Emerging in the 1970s and '80s, during the era of the then-Prime Minister Margaret Thatcher and the US President Ronald Reagan, authoritarian populism views were shared amongst the majority.

However once Thatcher and Reagan both left their posts, the US got Bill Clinton and the UK — Tony Blair, and both practiced a very different style of politics.

© AFP 2021 / Richard Lewis
Former US President Bill Clinton speaks with then British Prime Minister Tony Blair at the Guildhall in London, before a Banquet dinner hosted by the Mayor of the City of London, 11 July, 2003.

In recent years, there has been a return to populism, which has seen the rise of US president-elect Donald Trump, interim UKIP leader, Nigel Farage and other political figures in Europe.

In response, some have begun to suggest how politics may now be far more complicated than simply the old "left vs right" categorization, and instead we should now be talking about, for example, "authoritarian populists vs the elites" or the "establishment vs everyone else."

Romania tops the list with at least 82 percent of voters holding an authoritarian populist viewpoint. The results may concern mainstream politicians as it shows that the traditional understanding of left vs right is no longer as strong.

​Regius Professor of Political Science David Sanders from the University of Essex, worked on the survey with YouGov. He said that one of the biggest drivers for an increasing authoritarian populist viewpoint has to be the economic consequences of globalization, which Professor Sanders said can be hard to measure with a survey. However it can certainly be seen as a contributing factor. The key driver of populism though, is immigration, he added.

"[Now] that may be uncomfortable, but immigration has affected the way people feel, and people feel they have not been asked about immigration. Opinion polls for years have said that immigration is the most important thing and in the YouGov survey, we did ask the question, if people felt at home and there is an incredibly strong correlation," Professor Sanders told Sputnik.

Professor Sanders is not the only one who shares this viewpoint. Professor Steven Fielding from Nottingham University, also believes that immigration has played a key role in driving authoritarian populism. However, he says it started long before Reagan and Thatcher.

"I'm talking specifically about the UK… it [authoritarian populism] has been there for quite a while. In fact, probably the most infamous or famous person of populism was Enoch Powell, who was an influence over Thatcher and in many ways… what Powell did was he had a strong sense of what the nation was and he defined it in racial terms.  The famous speech he gave where he predicted that the nation would be destroyed by black immigrants, he talked above his own party and to the people, and he got a lot of support," Professor Fielding told Sputnik.

According to Professor Sanders, the concern is that mainstream political parties in both the US and Europe no longer offer a realistic prospect to people and their power, as well as influence, are declining.

"UKIP got under 13 percent of the vote in the last UK general election, and people think it's not a problem. But that sentiment was out there and that got mobilized in the Brexit vote. It's up to the social liberals and mainstream parties to stop this, but the social liberal parties don't have the backing to do that," Professor Sanders told Sputnik.

"There are at least two things going on, the parties that had represented the working class are much weaker and perceived to be discredited and no longer vehicles for improvement. We are not just talking about the working class, UKIP is middle class.

"There is a sense of grievance, culturally, but also that people's own material standards of living are declining and they blame the outsider, immigrants — the classic group to blame for people's discontent," Professor Fielding added.

The rise of authoritarian populism in the 1980s is a trend consistent with what we are seeing today, and there are comparisons that can be drawn, according to both professors.

"What we are getting is this constellation of attitudes that we call authoritarian populism. It's exactly the same principles that Reagan and Thatcher had in the 80s and that's why it's worth revising. It's authoritarian as it's opposed to any progressive human rights agenda and it's very critical of human rights."

"Also the people who represent this are authoritarian in mindset and Trump is the classic example. Anyone who disagrees with him is a liar or a fool and in contempt," Professor Sanders told Sputnik.

By the way: both liberal and social democratic orders can be replaced with something better than authoritarian populism. Hard. But doable.

"[Similarities can be see] with immigration, the outsider is a threat to the nation. Thatcher said there was a crisis in the British national identity, [there is this viewpoint] that immigrants are coming in and taking our jobs. So there are different ways you could define it as a national crisis in which immigrants are playing a crucial part and the forces of the left are weak and divided," Professor Fielding said.

With Trump heading to the White House and Nigel Farage encouraging Brexit, the signs authoritarian populism is back are there for all to see.