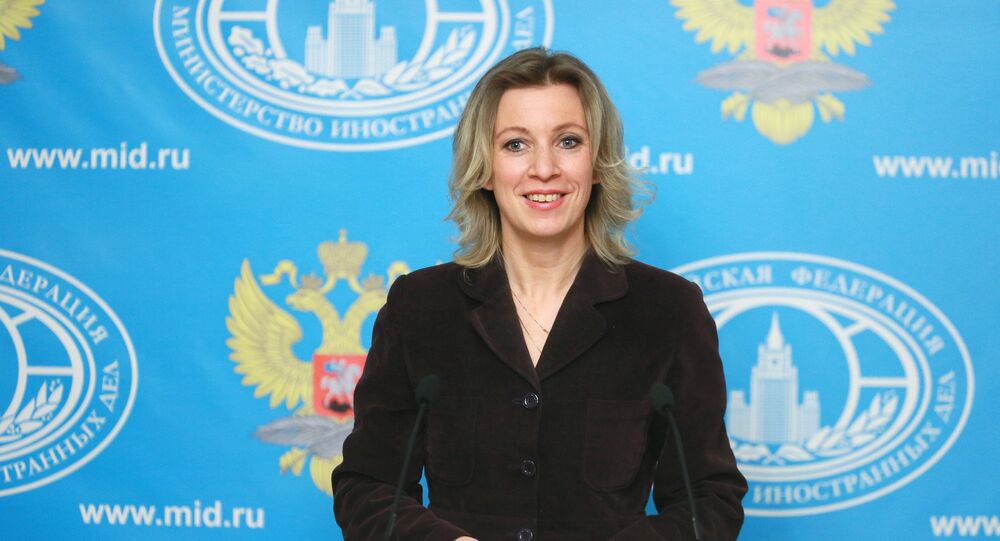 Zakharova started by talking about John Kirby's comment about RT. She said that the incident was outrageous: "Do you want your journalists to be in that position?"

She said that this incident is unprecedented, with some journalists receiving special treatment, and called the attempt to divide journalists into "right and wrong" outrageous.

On Wednesday, US State Department spokesman John Kirby accused Russia and Syria of bombing hospitals in Syria, prompting a question from an RT reporter regarding details of these alleged attacks. Kirby, in turn, said that he was not going to put RT "on the same level" with other reporters present, which "are representing independent media outlets."

"This unprecedented case of separation of journalists into right and wrong, respected and unrespected will definitely be brought up during the upcoming contact of Russian Foreign Minister Sergey Lavrov and his counterpart John Kerry," Zaharova said.

She added that Moscow hopes that the White House will be more careful about the bilateral relationship between Russia and the US.

On the situation in Mosul, Iraq

Zakharova said that the situation in Mosul is deteriorating "despite involvement of great forces and means, including heavy armaments and aircraft of the US-led coalition."

"Today marks one month since the start of the operation to liberate Mosul, and in Mosul itself, Iraqi military forces are conducting tough battles on the outskirts of the city. We can only welcome each step that lets them advance. However, the situation is still far from coming to an end," Zakharova said.

"The humanitarian situation in Mosul is degrading more and more," Zakharova said.

On joint fight against international terrorism

© Sputnik / Nikolai Khizhnyak
Frenchman Honors Russian War Hero, Claims Fighting Daesh as Important as WWII
Zakharova then read out a letter from the parents of  Russian officer Alexander Prokhorenko, who was killed in action during the liberation of the ancient city of Palmyra in Syria. The letter, addressed to the French President Francois Hollande, asked the President why he supports introducing more sanctions against Russia. The letter reminded that Russian military forces helped France battle fascism once, and are now battling Daesh in Syria.

An excerpt from the letter said: "Our son gave his life so that your children would never be in terrorists' hands. How much more blood must be spilled for you to understand that our people can beat the plight of terrorism together?.. Instead of uniting our forces, you publically condemn Russian pilots' actions and call for new anti-Russian sanctions. You cannot take an observer's position in this fight. You are either fighting terrorists, or are on their side."

On the situation in Syria

Zakharova then moved to talk about the situation in Syria.

Zakharova said that claims made by the US that the Russian Air Forces' campaign in Syria is purportedly breaking the international law are 'groundless'.

She pointed out that strikes carried out by the Russian Air Force and targeting Daesh in Idlib and Homs provinces are precise. The targets are pinpoint selected, based on verified intelligence.

"I'd like to point out that the claims made by the US State Department that the Russian Air Forces' campaign in Syria is purportedly breaking the international law are completely groundless, they are not true," Zakharova said. "The State Department's representative did not say, of course, which provisions of international law impede eliminating terrorists in a country that faces terrorist attacks, by agreement with the leadership of this country."

She then noted that Western politicians responded 'rather weakly' to the fact that terrorists had carried out a chemical attack in Syria. She reminded that, earlier on Monday, the Russian Defense Ministry said that samples taken in Syria's city of Aleppo prove that militants used chlorine gas in their attacks.

On the ICC Ukraine report

Talking about the International Criminal Court's report on Ukraine, Zakharova said that the report demonstrates that the Court has lost its independent status.

Zakharova said that the ICC cannot become part of the regulation process in the Eastern Ukraine.

On the US-Russia cooperation in Syria

When asked about the cooperation between Russia and the US in Syria, Zakharova commented that Russia maintains some contacts with the US on Syria, "but not as many as Moscow would want".

She then said that Russia welcomes any steps that promote the resumption of intra-Syrian talks.

Zakharova said that nobody has so far submitted any evidence supporting claims of Moscow's alleged influence on the presidential election campaign in the US.

"As to the US elections, I still do not understand how Russia could have influenced them. Many claim it has, but nobody has so far submitted any concrete facts or quotes, or anything worth an argument," Zakharova said.