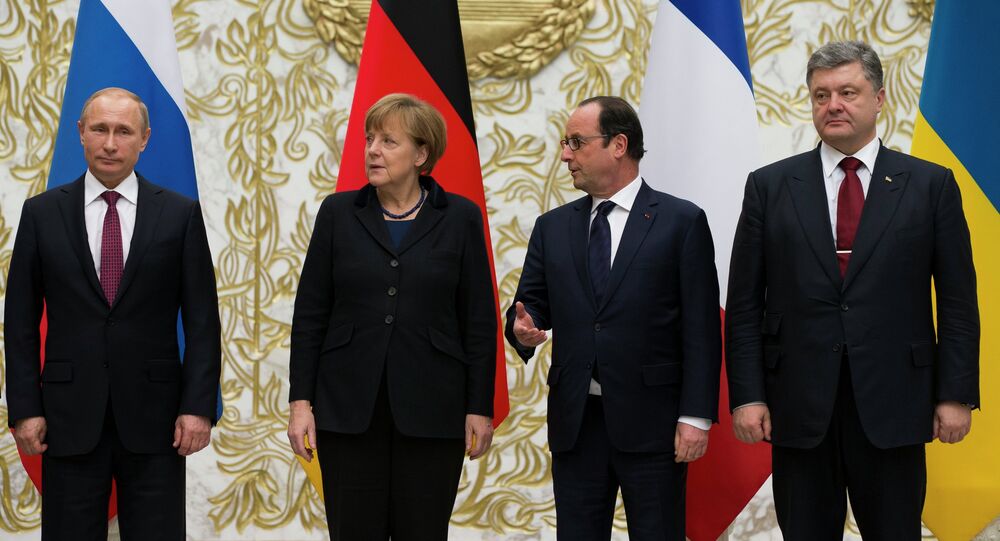 The results of Moldovan and Bulgarian presidential elections have come as yet another unpleasant surprise for the EU leadership: two pro-Russian candidates have won their respective country's presidency. "It is a step in the right direction," Russian parliamentarian Franz Klintsevich told Sputnik.

Speaking to Sputnik, Russian parliamentarian Franz Klintsevich, First Deputy Chairman of the Committee on Defense and Security at the Federation Council, remarked that it should come as no surprise that the anti-establishment candidates have come out on top in the Eastern European states.

"I have come to a conclusion that Russia's consistent, competent and honest position on the world arena, its aspiration not to seek dominance but to try to solve… the world's problem of international terrorism transparently, honestly and effectively [have played a substantial role in the elections' outcome]," Klintsevich emphasized.

© AFP 2020 / Rumen Radev
Bulgaria May Become Bridge Between Russia, EU Under Radev - European MP
The Russian parliamentarian added that the sanctions policy championed by the US and the EU has added insult to injury: Eastern Europeans have found themselves struck by sanctions and left out in the cold.

Still, the Russian parliamentarian warns against jumping to conclusions and calls attention to the fact that Brussels and Washington still cling to anti-Russian policies.

However, the choice made by Moldova and Bulgaria's electorates is a step in the right direction, he believes.

© Sputnik / Miroslav Rotar
Moscow Hopes Moldova's President-Elect Fulfills Campaign Pledge on Non-Aligned Status
According to Klintsevich, the elections in the US, Moldova and Bulgaria have demonstrated that the nations are longing for peace. In this context their interests coincide with those of Russia, which is promoting peace and urging the international community to team up on fighting terrorism.

However, the developments in Moldova and Bulgaria spell trouble for the EU establishment, according to Olivier Talles of La Croix, a daily French newspaper.

"Already strongly shaken up by the Brexit vote, the European Union has received a new warning this Sunday, November 13, this time coming from eastern parts of the continent. Voters of Bulgaria and Moldova have elected openly pro-Russian candidates, Moldavian [politician] Igor Dodon and Bulgarian [socialist] Rumen Radev, as their new presidents," Talles pointed out, stressing that both politicians were campaigning for rapprochement with Russia.

The French journalist underscored that in Moldova and Bulgaria Europeans are being blamed for turning a blind eye to corruption scandals within pro-European parties.

According to Talles, these elections could be regarded as Vladimir Putin's symbolic victory and, simultaneously, "a thunderclap in a European sky."

© Sputnik / Kirill Kallinikov
Kremlin Welcomes Bulgaria, Moldova Election Winners' Calls for Cooperation With Russia
"On Monday the Kremlin expressed its wish to resume 'close cooperation' with the newly elected Bulgarian and Moldovan presidents, while the EU politicians were mulling how to respond to the elections," he noted.

In an interview with Sputnik Bogdan Bezpalko, deputy head of the Center for Ukrainian Studies at the Moscow State University, noted that the outcome of the Bulgarian and Moldovan elections does not mean that the EU is about to fall apart at the seams.

It is highly unlikely that Moldova will abolish the EU association agreement while its citizens are unlikely to reject their Romanian passports which allow them to move freely across the European Union, Bezpalko told Sputnik.

According to the analyst, one may expect normalization of relations between Russia and the Eastern European states following the elections, but it does not mean that the countries will become Moscow's allies.

"There is, undoubtedly, positive dynamics. But it should not be regarded as a step toward an 'alliance' [with Russia]," he noted.

Only time will tell what was really behind the pro-Russian rhetoric of the newly elected Moldovan and Bulgarian leaders, Bezpalko underscored.

Still, according to the analyst, it is clear that the population of the Eastern European states have become disenchanted with the ideology of "Euro-integration": they want to resume normal and pragmatic relations with the neighbors.