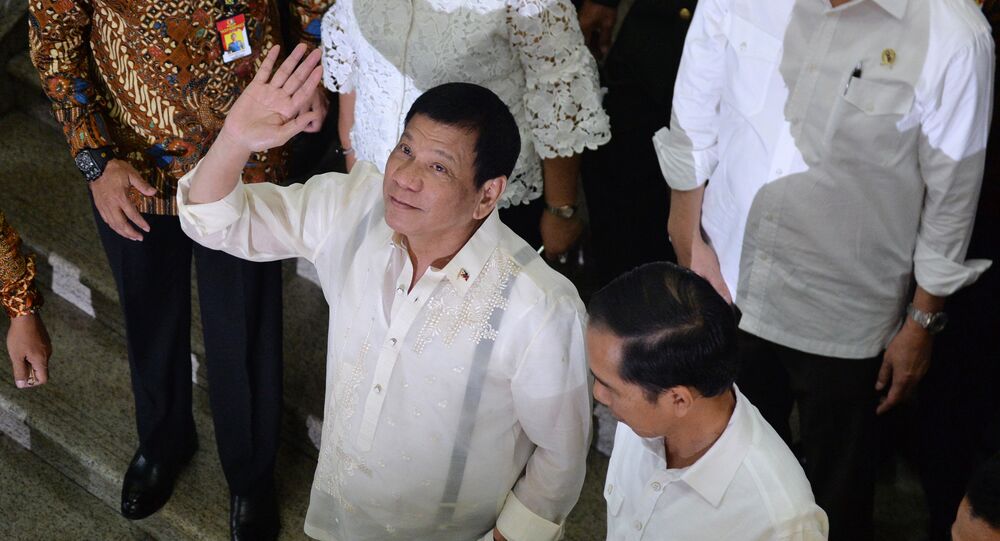 Philippine President Rodrigo Duterte's new foreign policy approach toward Washington marks the beginning of a tectonic geopolitical shift in the Asia region. Donald Trump's victory in the November election is likely to accelerate this process.

Philippine President Rodrigo Duterte appears to be upsetting Washington's Pivot to Asia strategy by bolstering his ties with China; however, a number of Asian Pacific nations may be about to follow in his footsteps.

"I've realigned myself in your ideological flow and maybe I will also go to Russia to talk to Putin and tell him that there are three of us against the world — China, the Philippines and Russia. With that, in this venue, your honors, in this venue, I announce my separation from the United States," Duterte told a business forum in the course of his four-day state visit to China in October.

© Flickr / Naval Surface Warriors
Waning Influence: Washington Losing Its Grip and Its Allies in Asia Pacific
Although the Philippine president clarified later that he hadn't meant to "sever ties" with Washington, his rhetoric marks a dramatic shift in the country's foreign policy, as Vladimir Svedentsov, a political analyst at the Russian Institute of Strategic Studies, remarked in an interview with Sputnik.

"If [Duterte] really means what he says, we may see a serious shift towards a more balanced foreign policy, which has in mind not only the US but Russia and China as well," Svedentsov pointed out.

"In one of his first acts as President this past July, Duterte announced that he had named former Philippine President Fidel V. Ramos as his Special Envoy to China," Engdahl wrote.

© REUTERS / Kim Kyung-Hoon
Duterte's Words Point to 'Serious Shift' in Philippines' Foreign Policy Toward Russia, China
The American author recalled that while being the Philippine president (1992-1998) Ramos "worked successfully to improve Philippine relations with China in all areas."

According to Engdahl, Duterte's move has marked the beginning of a tectonic geopolitical shift in the Asia region.

The US author noted that in late August, Vietnam's Defense Minister General Ngo Xuan Lịch, "paid a highly unusual visit to the mausoleum of Mao Zedong in Beijing" and announced that the Vietnamese would never forget that China lent its helping hand to the nation during the Vietnam War.

For his part, Vietnam's Prime Minister Nguyen Xuan Phuc stated that Hanoi sees the Sino-Vietnamese relationship as the top priority of its foreign policy during his September meeting with his Chinese counterpart Li Keqiang.

At the same time, as Bangkok-based geopolitical analyst Tony Cartalucci observed in one of his analyses for New Eastern Outlook, Washington's longstanding ally Thailand has recently "incrementally dismantled American influence over it" and substantially diversified its foreign policy contacts.

During his November visit to the country along with several dozen government leaders and business people, Razak signed a number of new agreements and understandings which brought Sino-Malaysian relations to a higher level.

"One by one, Asia Pacific nations are seeing no economic value in being allied to the United States, and they are opting out of the US geo-economic and geopolitical orbits," Mathew Maavak, a doctoral researcher in Risk Foresight at Universiti Teknologi Malaysia (UTM) and regular contributor to CCTV, noted in one of his interviews with Sputnik.

"The Asia Pacific remains a high growth region with the notable exception of Japan and Singapore, whose economies are actually contracting," he stressed.

© AP Photo / Bullit Marquez
Philippines: Military Exercises With US Will Be Scaled Back
The question then arises whether Donald Trump's victory in the US presidential election may change the trend.

On Wednesday Duterte congratulated Trump on his election victory during a visit to Malaysia.

"I would like to congratulate Mr. Donald Trump. Long live. We both curse. Even with trivial matters, we curse. I was supposed to stop because Trump is there. I don't want to quarrel anymore, because Trump has won," Duterte said, as quoted by Reuters.

So does it mean that everything is back to normal?

According to The Philippine Daily Inquirer, Duterte's statement does not necessarily mean that the two countries will become closer.

Citing sociologist and former lawmaker Walden Bello, the media outlet suggested that the combination of Trump's election and Duterte's new diplomacy "might accelerate the Philippines' distancing from Washington."

For his part, Trump won't prevent the Philippines from drifting toward China and may even abandon the US pivot to Asia strategy, Bello believes.

"Trump is bound to abandon Obama's pivot to the Asia-Pacific, as he seems more concerned about building a wall across the US-Mexican border than containing China's military might," the media outlet remarked.

Philippines' President Hopes Ties With US to Improve Under Trump Administration