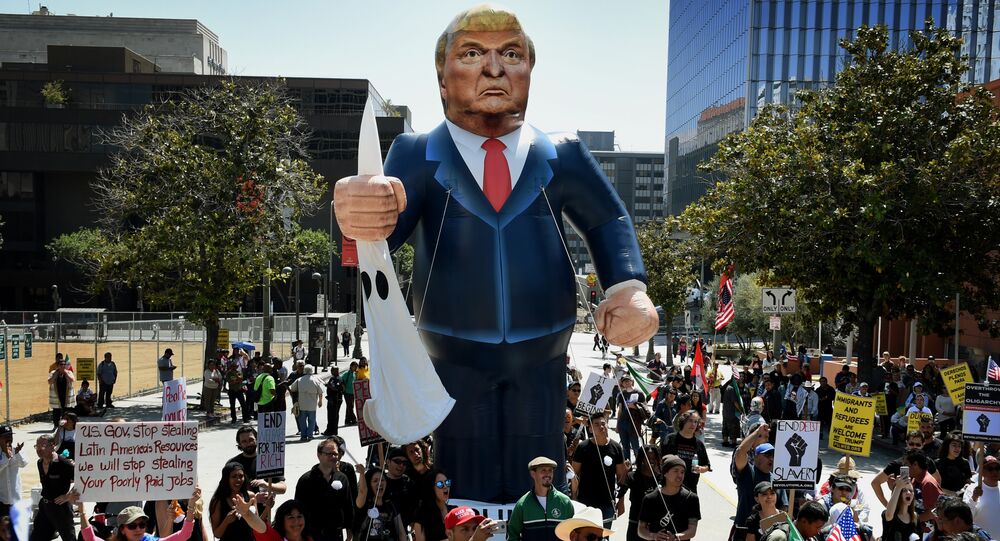 A number of European parties have expressed confidence that under the presidency of Donald Trump, Washington will improve relations with Moscow and the resolution of the Syrian crisis will be attainable.

© Sputnik / Vin Sharma
The Trump Revolution Has Been Televised: Anti-Racism Protesters in London Revolt
MOSCOW (Sputnik) – On Wednesday, Trump, who was the Republican candidate, won the US presidential elections despite the fact that most of the analysts and opinion polls had predicted his defeat to Democratic nominee Hillary Clinton. Trump got more than 270 votes needed to win.

Following Trump’s victory, multiple European party members and leaders expressed confidence that US-Russia relations will now see an improvement, which, in its turn, is likely to lead to the resolution of conflicts in the Middle East.

According to Belgium’s Parti Populaire (People’s Party), Trump’s presidency could see the restart of dialogue between Washington and Moscow on the Syrian crisis resolution.

"We must talk with all parties. That is what Trump will do, starting with the Russians. The war in Syria must come to an end; it can only happen by collaborating frankly and openly between Russia – the USA and Europe. We can together bring this war to an end," party member Aldo Carcaci told Sputnik on Wednesday.

© Sputnik / Natalia Seliverstova
'Russia Ready to Close Sad Page' in Ties With US If New Administration Has Will
Carcaci pointed out that there were no real efforts to fight the Islamic State (IS, or Daesh) terrorist group during the presidency of Barack Obama, moreover, he "let Daesh flourish and embellish with their horrible caliphate".

The Austrian Team Stronach Eurosceptic party believes that strong US-Russian cooperation, which is highly likely under Trump, will give a positive trajectory to the efforts of eradicating terrorism in the Middle East and resolving the Syrian and Iraqi crises.

"We are optimistic that he [Trump] might encourage an end to these crises as there could be a convergence of Trump and Putin. We are confident that [Russian President Vladimir] Putin and Trump might find a common talk basis," the party’s Executive Director Robert Lugar told Sputnik on Wednesday.

According to Lugar, overall, Trump’s victory means that peace could finally come to the Middle East, as he had promised to focus more on internal US issues instead of foreign affairs.

The Syrian issue is a matter of much debate, as the country has been torn apart for about five years by an armed conflict between the government (which is supported by Russia), opposition groups (supported by the United States) and terrorist organizations, including the Islamic State and Jabhat Fatah al Sham (formerly known as the Nusra Front), both outlawed in Russia and many other countries.

NO TO INTERVENTIONISM, YES TO RUSSIA

© AFP 2021 / Petras Malukas
'NATO in Jeopardy' After Trump’s Victory in US Presidential Election
Leader of France's National Front (FN) party said on Wednesday that the victory of Trump in the US presidential elections holds promise for more peace and that Trump is more likely to oppose globalization, improve relations with other nations, notably with Russia, and end military interventionism, which has caused an influx of migrants to Europe, including France.

The United States could actually end its sponsorship of revolts in the Middle East and work harder toward bringing peace to Syria under the Trump administration, UK Independence Party (UKIP) lawmaker Raymond Finch told Sputnik on Wednesday.

"Wherever there’s been a Western-sponsored revolt against all of these Middle Eastern leaders, the situation has worsened for the people, and hopefully now Mr. Trump will cease it," Finch said, adding that he hoped a viable peace settlement would be reached in Syria.

Trump said during an October debate with his Democrat rival, Hillary Clinton, that her plan to force Syrian President Bashar Assad to step down threatened to trigger a Third World War with Russia and urged to focus on fighting the Islamic State terror group instead.

© AFP 2021 / DELIL SOULEIMAN
Not America's Battle to Fight: Trump 'May Refuse to Wage Wars in Syria, Iraq'
During his electoral campaign, Trump criticized the state of the relations between Moscow and Washington, as they deteriorated over Crimea's reunification with Russia and over the internal Ukrainian crisis that the West claims Russia is involved in (the United States and its allies have sanctioned Russia as a "punishment" for this alleged involvement).

According to Finch, the United States and Russia now have a chance for mending their ties after Donald Trump becomes the next US president.

"We cannot have the two greatest powers in the world – America and Russia – at each other’s throats. It’s bad for everyone. Hopefully Mr. [Vladimir] Putin and Mr. Trump will get together and we will see a fruitful peace break out," Finch told Sputnik.

Trump indicated during the election campaign he did not regard Russia as an enemy. After his victory in the Tuesday elections, Trump promised in a speech that his administration would get along with all other nations that would be willing to get along with it.

The Trump Revolution Has Been Televised: Anti-Racism Protesters in London Revolt