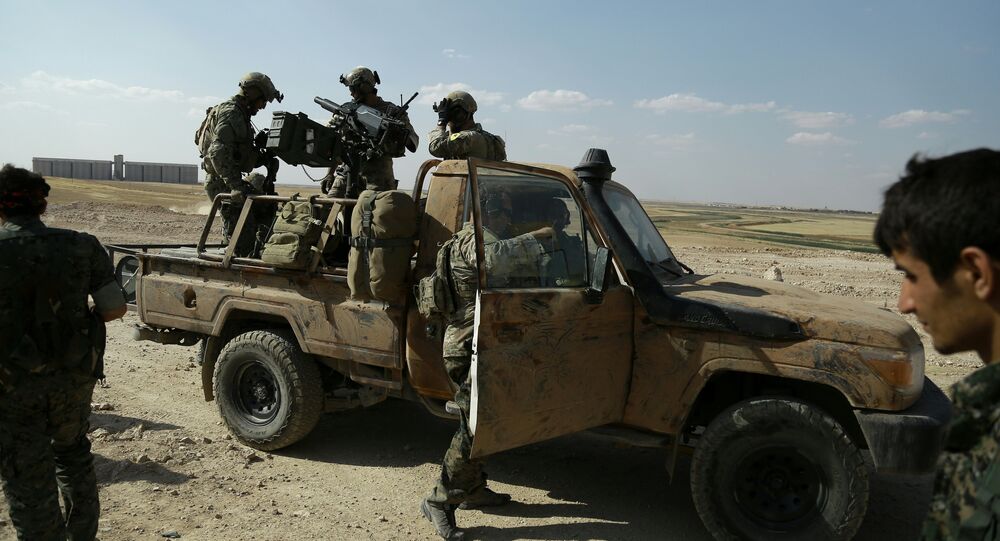 There is the possibility that the world will see a dramatic shift in the US' Middle Eastern policy under the Trump leadership, Oguz Kaan Salici, a member of the Turkish opposition Republican People's Party (CHP), suggested in an interview with Sputnik.

"We can judge his position on the basis of some of his statements and promises made in the course of the presidential campaign. Will they be put into practice as part of the new president's foreign policy concept and does he have all necessary human resources to bring them to life? Will he return to the classical US foreign policy doctrine after being elected? Only time will tell. Right now we cannot make any confident claims or prognoses," Salici said in an interview with Sputnik.

© AFP 2021 / YASIN AKGUL
Turkey Finds Itself Left Out in the Cold Amid US-Kurdish Raqqa Offensive
Still, the Turkish politician believes that one can try to envisage the main trends of Trump's foreign policy by looking at his electoral promises.

For instance, Salici noted, Trump insisted that it is necessary to hold a dialogue with Russia and declined to consider Moscow an enemy, a rival and a force to fight with.

"Besides, Trump may refuse to participate in military actions in Syria and Iraq, saying that it is not 'America's war to fight'," the Turkish MP suggested, adding that some of Trump's earlier remarks indicate that such a scenario is quite possible.

However, Sacili repeated, these assumptions are not based on some clear strategy. It could never happen, especially if some influential forces in the US government system step in trying to direct the US foreign policy along the well-trodden path.

Salici underscored that Trump's victory has not come as a surprise for him. He drew parallels between the UK's Brexit vote and the US 2016 presidential election.

According to the Turkish politician, neither Britons nor Americans were willing to share their aspirations with pollsters. Apparently therefore, numerous polls' surveys have turned out to be misleading.

"I link the Americans' choice of Trump to popular dissatisfaction with the existing US system," Salici said.

© AFP 2021 / JACQUES DEMARTHON
US Syria Policy Unlikely to Change After Trump Victory - PYD Kurdish Party
At the same time the Turkish MP believes that the Trump administration won't be willing to aggravate further tensions with Ankara, especially regarding the issue of Fethullah Gulen's extradition.

Fethullah Gulen is regarded by Ankara as an alleged mastermind behind the July coup attempt in Turkey.

Salici expressed his hope that the new US authorities would lend a sympathetic ear to Ankara's request.

"It could become part of a policy aimed at struggling with the political Islamism," he said.

On Wednesday the Turkish government congratulated Trump on his victory in the 2016 US presidential election.

"We congratulate Mr. Trump," Turkish Prime Minister Binali Yildirim said in an official statement, as quoted by Hurriyet Daily News, "I am sure that the strategic partnership of Turkey and the US, which is based on a long history, has created an opportunity for the new president, paying attention to Turkey's sensitivity in the fight against terrorism, carrying forward traditional friendly relations prioritizing peace and security in the region."

"Trump quake was no surprise for Turkey," the headline of the Daily Sabah editorial reads.

"The reason why Turks mainly see Trump's victory as an encouraging sign is due to the hope that the new president will bring a breath of fresh air to bilateral ties," the article states, adding that "Trump… inspires within Turkey the hope that the bankrupt and disappointing US establishment will be replaced by something better."