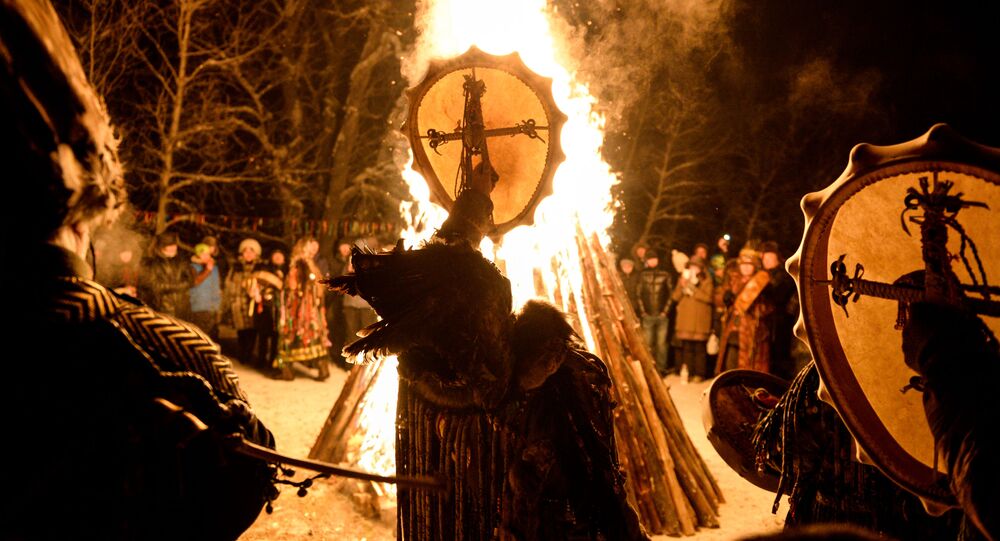 However it is not the only contemporary political scandal involving cults. Sputnik offers a list of the top 5 stories about black magic with far-reaching political consequences.

© REUTERS / Kim Hong-Ji
South Korea 'Shaman Gate': President's State Policy Decided by Cult
This weekend up to 100,000 people poured onto the streets of Seoul using such words as “treason” and “criminal” to demand Park Geun-hye’s resignation. It was reported to be the biggest anti-government demonstration since 2008. A wave of public outrage broke over President Park Geun-hye’s close connection with her longtime friend, a shaman Choi Soon-sil.

Choi Soon-sil is a daughter of Choi Tae-min, the founder of the Church of Eternal Life. This obscure cult combined Catholic and Buddhist teachings, and Choi Tae-min declared himself Messiah and Buddha Maitreya all in one. He befriended Park Geun-hye after her mother’s assassination in 1974. He told Park that her mother had appeared to him in a dream, asking him to help her daughter.

As local media reported, Park asked for Choi’s advice on issues from her outfits to relations with North Korea. Now political analysts learned that Park’s strong belief in the approaching collapse of the N Korean regime was based not on scientific research but on shaman rituals.

Meanwhile North Korea celebrated this scandal as its victory over the South. “Nowhere else in the whole world does the head of a state read from rostrum speeches written by charlatans,” N Korean newspaper the Rodong Sinmun claims.

“He enslaves people with the ‘three-lettered things,’” Gokcek said in his interview to Turkish TV channel Arti 49. The phrase "three-lettered things" is used in Turkish to refer to genies. “He has the ability to do this too. People have become mesmerized and enslaved,” Gokcek continued.

Besides, according to Turkish leading daily Hurriyet, Gülen’s followers also used special “mason dollars,” which look like normal one-dollar notes, but for Gülenists they were a kind of ID card. If the number of a note began with F, it meant that it belonged to a high-ranking member, Hurriyet claimed.

"We invited the devil to destroy the political power of Mr Yameen's opponents and to win others to his side," he told to the Telegraph. "Look at the result. That's the proof. Look at how voting changed."

Political tensions in the Maldives rose after 2012, when the former president of the country Mohamed Nasheed resigned under pressure from anti-governmental protests, which were partially supported by the military and police. During the presidential elections in 2013, Nasheed obtained many more votes than Yameen in the first round, but he still lost in the second round.

The supporters of the former president believe that Yameen rigged ballots with the help of the military.

© AFP 2021 / ALI AL-SAADI
Iran's Former Leader Ahmadinejad Has No Plans to Run for President in 2017
In 2010 Iran's powerful clerics were shaken by an occult scandal. Iran's supreme leader, Ayatollah Ali Khamenei and his confidants criticized President Mahmoud Ahmadinejad and his government for witchcraft. In June 2010 more than 20 politicians close to Ahmadinejad were arrested on charge of summoning genies.

The chief of staff, Esfandiar Rahim Mashaei, the head of Culture Committee Abbas Amirafar, and presidential advisor Abbas Ghaffari were on the list of magicians.

Ghaffari was described by conservative Iranian newspaper Ayandeh as "a man with special skills in metaphysics and connections with unknown worlds."

Strains between Ahmadinejad and Ali Khamenei strained after Minister of Intelligence Heidar Moslehi was dismissed by the president, but Ayatollah did not accept his resignation. In response Ahmadinejad did not come to work and was absent for 10 days. That was when the “genies scandal” blew out.

The politico-occult fight was won by Ali Khamenei. Since 2011 Ahmadinejad abandoned his attempts to remove the Supreme Leader from power and concentrated on increasing the number of  nuclear centrifuges and struggled with the “great Satan”of the USA.

5. Witches among US Republicans

In 2010 when O'Donnell was running for Senate elections, previously unseen footage from 1999 of her on the television show "Politically Incorrect" was released.