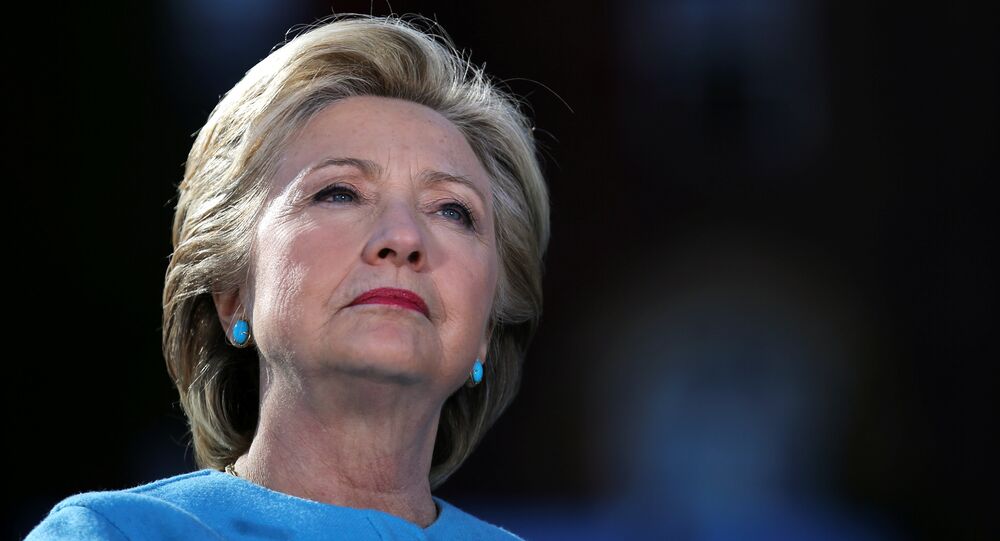 The Democratic hopeful has released a new ad that warns of the possible nuclear consequences of a Trump presidency. It’s a curious choice, given Clinton’s own standing with prominent neoconservatives.

In 1964, Lyndon Johnson released a campaign ad that featured a 3-year-old girl casually picking flowers. Played by Monique Luiz, the “daisy girl” warned of a nuclear devastation if Republican rival Barry Goldwater were to win the election.

"This was me in 1964,” she says in the new video. “The fear of nuclear war that we had as children – I never thought our children would ever have to deal with that again. And to see that coming forward in this election is really scary."
© REUTERS / Rick Wilking
Trump Calls Russia an Ally, Says Hillary Wants ‘Something Worse’ Than Cold War

This refers to statements made by Republican candidate Donald Trump, who earlier indicated an alarming nonchalance about nuclear weapons.

"Somebody hits us within ISIS," he said in an interview with Chris Matthews, referring to the Daesh terrorist group. "You wouldn’t fight back with a nuke?"

"You know, we need unpredictability," he elaborated in an interview with Bloomberg News. "The enemy, we have enemies. ISIS is a enemy."

But for the Clinton campaign to paint Trump as the greater nuclear threat means ignoring the fact that the Democratic candidate is the one more often criticized as a war hawk.

"She’s looking forward to being a war president on day one," Micah Zenko, a senior fellow with the Center for Preventive Action at the Council on Foreign Relations, wrote for Slate.

As geopolitical analyst Steven MacMillan notes, Clinton was "instrumental in NATO’s 2011 war in Libya, which resulted in the ousting of Muammar al-Qaddafi and the complete destruction of Libya, a country that previously had the highest standard of living on the African continent."

An email from Clinton campaign chair John Podesta, released by WikiLeaks, revealed a private speech in which Clinton vowed to continue her hawkish policies once elected.

"We’re going to ring China with missile defense," she said in 2013, referring to what her administration would do if North Korea obtained a ballistic missile.

"We’re going to put more of our fleet in the area. So China, come on. You either control them or we’re going to have to defend against them."

Given that North Korea is, in fact, in possession of a ballistic missile, it sounds like the daisy girl is doomed no matter who wins the election.

What’s Really in Those Clinton Emails: Smoking Gun or Smoke and Mirrors?