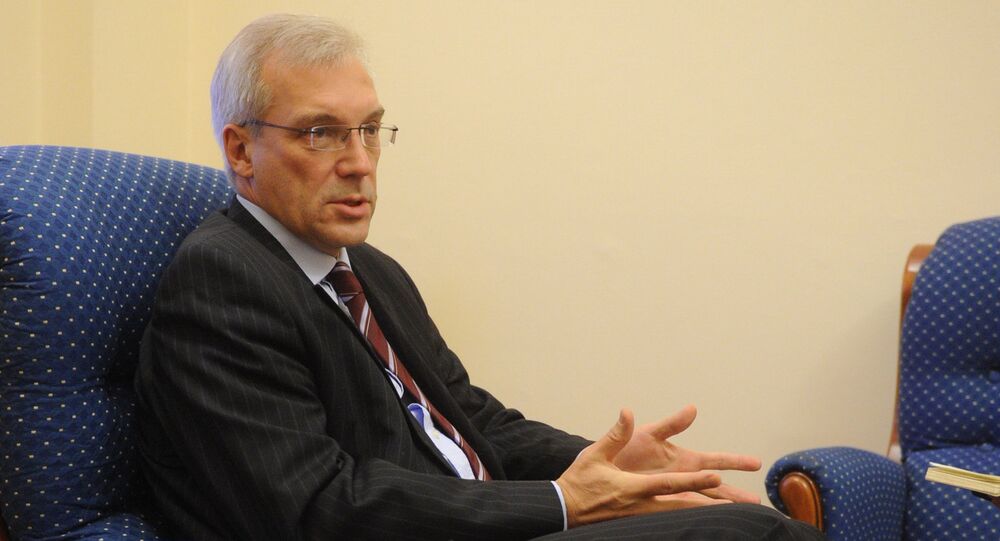 Russia's envoy to NATO Alexander Grushko said that Moscow is ready for dialogue with NATO, but Russia will defend its own interests.

MOSCOW (Sputnik) — Moscow will keep defending its national interests but is still open for the dialogue with NATO, Russia's envoy to NATO Alexander Grushko said Monday.

"We have not not withdrawn from anywhere, have not broken anything, so we will calmly continue to pursue our line [of policy]. Where NATO acts contrary to our interests, we will defend these interests, be it through military planning or politically. But if NATO would be ready to move on to other models of relations with us, on models of practical cooperation, we, of course, will look into it," Grushko told Rossiya 24 broadcaster in an interview.

© REUTERS / Francois Lenoir
Date of Next Russia-NATO Council Meeting in Final Stages of Agreement
NATO is waging information warfare against Moscow instead of dialogue, according to Grushko.

"I was amazed by the level of hysteria which was arranged primarily in the media about the passage of Admiral Kuznetsov [aircraft carrier], auxiliary vessels through the English channel. A feeling evolved that NATO have had no other agenda except for thinking how the alliance's solidarity would look like if one or two countries would suddenly give permission for refueling. All of this, in general, indicates one thing that the information war has gone off-scale," Grushko said.

He added that "sane people should realize that Russia's participation in the Syrian operation is a factor playing the key role in bringing the whole process to the peace settlement" and until NATO sticks to these double standards dialogue is not possible.