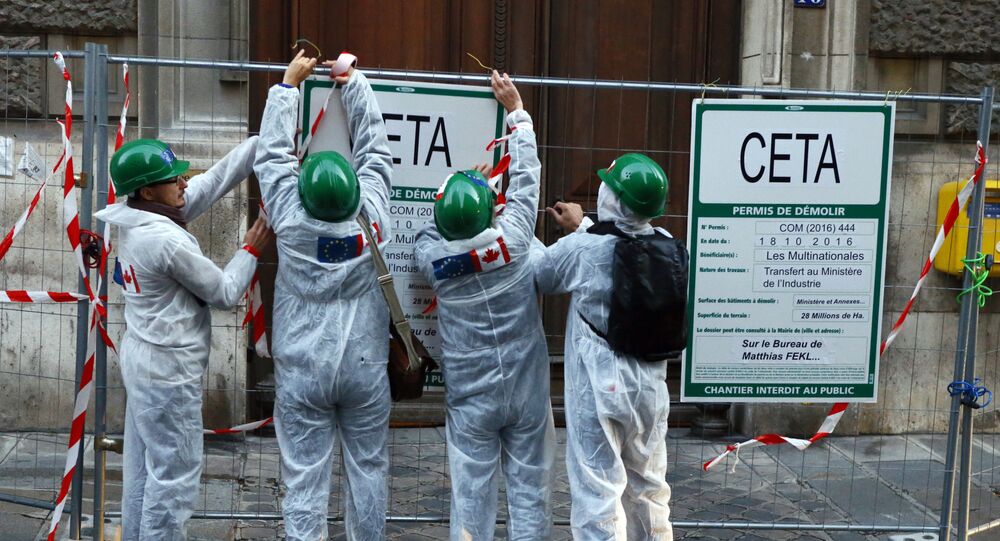 The Belgian region of Wallonia was apparently promised something "it could not say no to" in exchange for local authorities supporting the Comprehensive Economic and Trade Agreement (CETA) between the European Union and Canada, German MP Andrej Hunko of The Left party told Sputnik, adding that the deal "interferes with democratic institutions."

Concerned with CETA's impact on labor, environmental and consumer standards, Wallonia blocked the deal earlier in October, but Belgian politicians overcame their differences on the major-free trade agreement this week. The document is expected to be signed later on Sunday.

© REUTERS / Eric Vidal
Canada-EU Trade Deal: 'We Don't Want Any Future Talks to Be Conducted This Way'
Hunko has been against CETA since the deal "seriously interferes with democratic institutions in the European Union and Canada, for instance by doing away with non-tariff measures."

However, it is the arbitration mechanism that CETA will introduce that is the real issue for the German politician and other critics of the agreement.

"This system, known as investor-state dispute settlement, allows … big businesses to sue governments. This has been the key issue of the deal. This was at the heart of all the debate," he said. "I am against this system. Canada and EU members are advanced countries which do not need these special courts."

Hunko appeared to have an issue with the way CETA talks were conducted.

© REUTERS / Chris Wattie
A Sign? Canada's Trudeau Bound for CETA Signing Turns Around Due to Plane Problems
The negotiations on CETA were "carried out for years, but initially they were held behind closed doors, with lobbyists participating. They were gradually unveiled due to public pressure," the politician said, describing the process of reaching the agreement as "challenging."

Hunko was also critical of how mainstream media was covering Wallonia's opposition to the deal.

"At some point [media outlets] started to present CETA as a very progressive deal, saying that it has been drastically altered and only small Wallonia, a stubborn region, was against it," he said.

The politician emphasized that "millions, the majority of population" in many countries, including Germany have "been critical" of CETA. "I am happy that [Minister-President of Wallonia Paul Magnette] adopted a principled stance on the issue," he said.