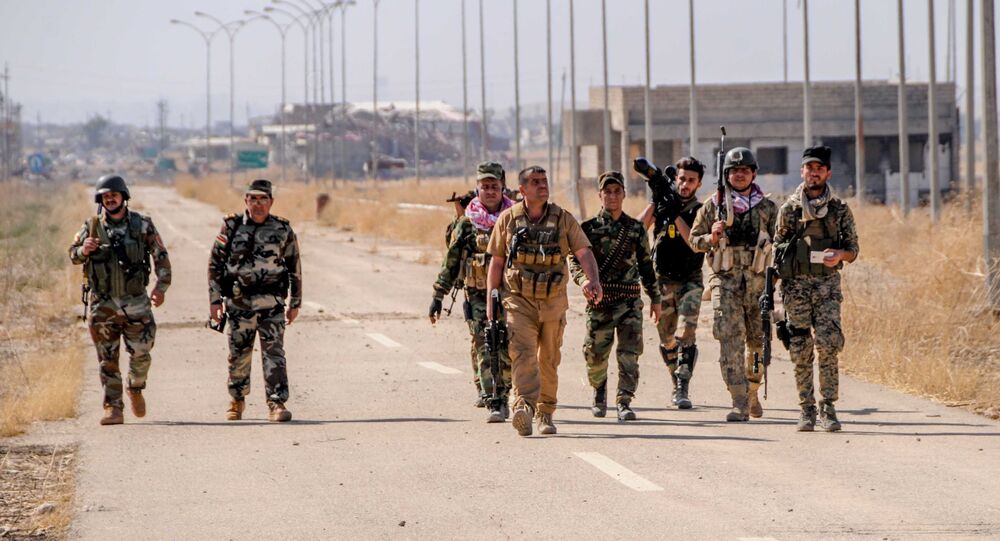 'Unsavory Mix': Liberating of Mosul Will Not Bring Iraq's Troubles to an End

While the US-led coalition and its allies continue to gain ground around Mosul, the question arises what will happen to Iraq and its political structure after Daesh is defeated.

© REUTERS / Stringer
Encircling Mosul: Iraqi Shia Militias to Block Daesh Western Flank
The US-led coalition and allied forces continue the Mosul offensive with the Iraqi Shiite militia opening a new front against Daesh (ISIS/ISIL) west of the city; the move has taken on a new significance amid growing concerns that Daesh may be fleeing to the Syrian city of Raqqa and regroup there.

Commenting on the issue Kurdish media outlet Rudaw highlights the significance of the Shiite militia offensive, explaining that the Iraqi armed forces and their Kurdish allies have made advances from the North, East and South of Mosul thus far, while the front in the west remained "almost intact," "providing an escape route for ISIS [Daesh] militants to make their way to Syria."

On the other hand, by severing the route from Mosul to Raqqa, the Shiite militia will halt the flow of fighters, weapons and supplies between the two Daesh's strongholds.

"The battle to liberate western Mosul started today in the morning. All units of Al-Hashd Al-Sha'abi [the People's Mobilization Forces Shia militia] are taking part in the operation," Jawad Talebawi, representative of one of the Shia units told Alsumaria TV-channel on Saturday.

While the Mosul battle is still raging, the question arises what will happen to the city and the country after Daesh is defeated.

© REUTERS / Stringer
Daesh in Disarray: Terrorists 'Fleeing, Blowing Themselves Up' Amid Mosul Operation
Western observers express increasing concerns about the possibility of ethnic and sectarian clashes in the region following the upcoming liberation of Mosul.

Daniel L. Byman of the Brookings Institution notes that "different factions have competing views of what Iraq should be."

"This unsavory mix is much of the problem," he stresses.

According to the US scholar, the Iraqi Sunnis and the Kurds want "a high degree of decentralization" while the Iraqi Shiites insist that the country should remain united.

At the same time, Iraq's powerful neighbors, Turkey and Iran, "compound the problem" by supporting their conflicting proxies in Iraq, he adds.

Echoing Byman, Patrick Cockburn of The Independent notes that the Kurds "want to solidify their control" over the territories claimed by both Baghdad and the Kurdish regional authorities.

In the course of the war against Daesh, the Iraqi Kurds have unilaterally expanded the area of the Kurdistan Regional Government (KRG) by 40 percent, the journalist highlights.

© REUTERS / Ruairidh Villar/Save the Children
'They Humiliated Us, Blew up Our Church': Iraqi Priest Recalls Life Under Daesh
Meanwhile, Turkey is seemingly seeking to play a bigger role in Iraq's affairs, positioning itself as the defender of the Sunnis of Iraq.

Indeed, although Baghdad has officially declined an offer from Ankara to help oust Daesh from Mosul, there are signs emerging that Turkey is playing a bigger part in the offensive than one can imagine.

Citing an unnamed US official, The Washington Times reported Thursday that "the militiamen, who had been confined within Turkey's main Iraqi base in Bashiqa, are carrying out 'reinforcement operations' near Mosul Dam north of the city," adding that the Turks have trained upward of 3,000 Sunni militia fighters in Bashiqa, ten miles east of Mosul.

Investigative journalist Seth Ferris suggests in his opinion piece for New Eastern Outlook that following the liberation of Mosul Turkey and Iran may conclude a secret deal on sharing the spheres of influence in Iraq, bypassing the US.

"They would split Iraq between them, with the Turks taking the north, including Mosul and Erbil, and the Iranians taking the south, including Baghdad and Basra. This would be waved in the face of the US, but it could do little about it if this was seen internationally as the peaceful way to end the conflict," Ferris assumed.

© REUTERS / Stringer
Butterfly Effect: This is What Could Happen After Ankara's Meddling in Mosul Battle
However, for its part, the US is unlikely to hand over geopolitical reins of Iraq to other players. For Washington, the liberation of Mosul is part of a broader plan, Elena Suponina of the Russian Institute for Strategic Studies (RISS) deems.

"The operation in Mosul will help to kill several birds with one stone. Not only will it help achieve success for the Democrats ahead of the elections, [the implications of the offensive] will also create additional challenges for the Syrian government and its allies, including Iran and Russia," Suponina told RIA Novosti.

However, as Patrick Cockburn wittily notes in his article "these participants in the struggle for Mosul may be dividing the tiger's skin before the tiger is properly dead."

There is the possibility that Daesh will try to capitalize on the inner strife among the US' regional allies and go underground to continue to spread its terrorist activity across the Middle Eastern region and beyond.