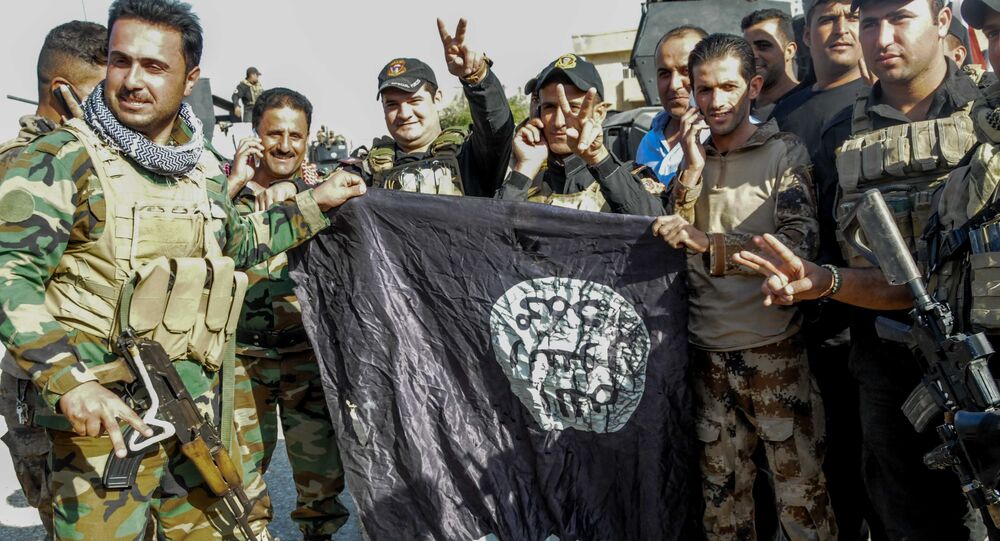 If Daesh is defeated in the Iraqi city of Mosul, the terrorist group will likely go underground, enabling its old insurgent techniques, RAND think tank analysts warn, highlighting the importance of analyzing Daesh and al-Qaeda in Iraq's previous schemes to ultimately defeat the terrorists.

If the US-led coalition succeeds in liberating the Iraqi city of Mosul from Daesh, it needs to prepare for the terrorist group to go underground, US political scientists Patrick Ryan and Patrick B. Johnston of the influential RAND Corporation think tank note in their article for War on the Rocks.

"As Iraqi forces, backed closely by US advisors, prepare for the imminent clearance of the strategic city, they should heed the lessons learned from previous efforts to wrest control of Mosul from the Islamic State [Daesh]. When facing a major clearance operation, the group has often managed to go 'underground' rather than fight a conventional military force head on," Ryan and Johnston underscored.

© AP Photo / Raqqa Media Center of the Islamic State
Daesh Prepares for Underground War as Loss of Captured Territory Looms
The political scientists emphasized that this insurgent technique allowed Daesh's predecessor, the Islamic State of Iraq (ISI) — also known as al-Qaeda in Iraq (AQI) — to survive the US-Iraqi counter-terrorism operations in Mosul from 2004 to 2009.

According to the scholars, Daesh "will likely replicate this approach, deactivating and dispersing its military units and reinforcing its intelligence, security, administrative, and financial groups," following the liberation of Mosul.

Ryan and Johnston referred to the latest RAND report entitled "Foundations of the Islamic State: Management, Money, and Terror in Iraq, 2005-2010" which sheds light on AQI/ISI finances, territorial plans, bureaucracy, management, stressing that many of Daesh senior leaders including Abu Bakr al-Baghdadi were top leaders within AQI/ISI.

The US scholars exposed old covert tactics adopted by Daesh and its predecessors. The group used to infiltrate a city and establish "safe houses" for more experienced members of the group. Then they created an intelligence network by recruiting local informants.

The terrorists also created administrative and financial entities to ensure robust command and control, as well as financing and recruiting activities.

According to Ryan and Johnston, AQI/ISI had repeatedly used one and the same scheme to establish control over urban and rural areas across Iraq between 2005 and 2010.

"Based on extensive on-the-ground reporting from Mosul and other Islamic State-occupied cities, as well as careful analysis from leading experts and scholars, it's clear that the Islamic State is following this same blueprint today," the scholars asserted.

"[Daesh] is preparing to go to ground, and will resume its campaign of assassinations against Sunni leaders it sees as collaborators and other foes, which it used to successfully revive itself post-2011 after being devastated by the US-led counterinsurgency campaign," Byman noted in his article on October 18.

"Al-Adnani's statement that the Islamic State [Daesh] does not 'fight to keep territory' undercuts the group's current raison d'être. As a self-professed caliphate, the Islamic State is fighting battles it knows it cannot ultimately win, including the upcoming battles for Raqqa and Mosul," the report read.

After retaking the Syrian town of al-Shaddadi from Daesh in February, 2016, the Syrian Democratic Forces (SDF) discovered a vast network of trenches, tunnels and underground shelters used by terrorists to store weapons, hidden from air strikes and transport oil.

Careful analysis of Daesh's previous techniques could pave the way to ultimate defeat of the terrorist organization, the US scholars believe.