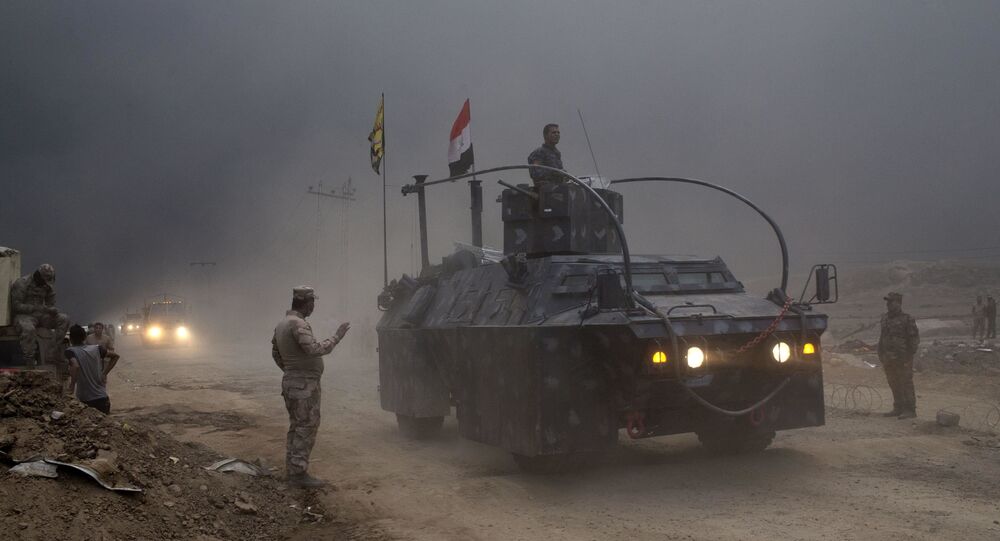 Mosul Civilians Caught Between the Devil and the Deep Blue Sea

Mosul residents have been caught between the devil and the deep blue sea following the beginning of the US-led coalition's military operation against Daesh in Iraq. UN human rights organizations warn that the situation may turn into a "displacement catastrophe."

© REUTERS / Ruairidh Villar/Save the Children
Unlike Moscow, Washington 'Couldn't Care Less About Civilian Casualties' in Syria, Iraq
Since the first days of the US-led coalition's offensive on Daesh's stronghold in Iraq, United Nations humanitarian organizations have begun sounding alarm, warning that the battle for Mosul may turn into a "displacement catastrophe."

According to the UN Office for the Coordination of Humanitarian Affairs' (OCHA) estimates, about one million people may flee Mosul due to the US-led coalition's operation, of which about 200,000 may be displaced during the first weeks of the offensive.

The situation is described as having the potential to be "one of the worst-case scenarios," the UN News Center website signaled last week.

On Wednesday, the UN High Commissioner for Refugees' (UNHCR) Representative in Iraq, Bruno Geddo revealed that the agency had registered some 10,550 displaced persons since the beginning of the coalition's advance.

© Flickr / Expert Infantry / Best of the U.S. Air Force - Department of Defense Image Collection - September 1998
US Air Force Jet Struck Girls' School in Iraq's Mosul on October 21 - Russian Military
Commenting on the matter in her op-ed for The National Interest, Jessica Brandt, an associate fellow in the Foreign Policy program at the Brookings Institution, calls attention to the fact that the majority of refugees "will not attain refuge in well-established displacement camps."

"Instead, they will be directed to 'emergency sites' that provide only the most basic services," she stressed, citing the International Organization for Migration (IOM).

"The greater problem is that almost everywhere in Iraq, camps and sanctuaries are full. Many people leaving Mosul will have to crowd into existing camps and shelters, exacerbating the tenuous security and health conditions in these settlements," Stratfor's report stated, adding that Turkey and Jordan have recently tightened their borders with Iraq.

Meanwhile, according to Brandt, the number of Iraqis who need some form of humanitarian aid currently amounts to nearly one-third of the country's population.

"The number of people in Iraq who need some form of humanitarian assistance already exceeds ten million," she emphasized.

Citing UNHCR, the scholar pointed out that it will cost up to $196.2 million to handle the coming humanitarian crisis.

However, it's only the tip of the iceberg. The other problem, prompted by the US-led coalition's advance, is that humanitarian organizations need to establish "safe pathways out of the violence."

© REUTERS / Alaa Al-Marjani
Daesh May Bring Unpleasant Surprise to US-Led Coalition in Mosul
Brandt warned that hundreds of thousands of Iraqis could find themselves caught in the fighting. It is also highly likely that Daesh would use the citizens as human shields to prevent the coalition's airstrikes.

To make matters worse, the US' previous combat operations in the Middle East indicated that Washington pays a little if any attention to non-American civilian casualties, political analyst Oleg Glazunov of the Moscow-based Plekhanov Russian University of Economics told Radio Sputnik Thursday.

"Military aircraft usually do not take part in urban combat since it is hard to tell ally from an enemy. But Americans couldn't care less about these things…. For Washington, there are US citizens and all the rest who present no interest to the US," Glazunov said, highlighting that the Mosul operation consists mainly of urban combat.

On Tuesday, the Russian General Staff's chief Lt. Gen. Sergei Rudskoi told reporters that more than 60 civilians were killed and 200 injured because of the US-led coalition's airstrikes on residential areas in Mosul in the last three days.

"The key goal for Americans is to carry out a mission with minimal American losses. They don't care about the rest," Glazunov stressed commenting on the issue.