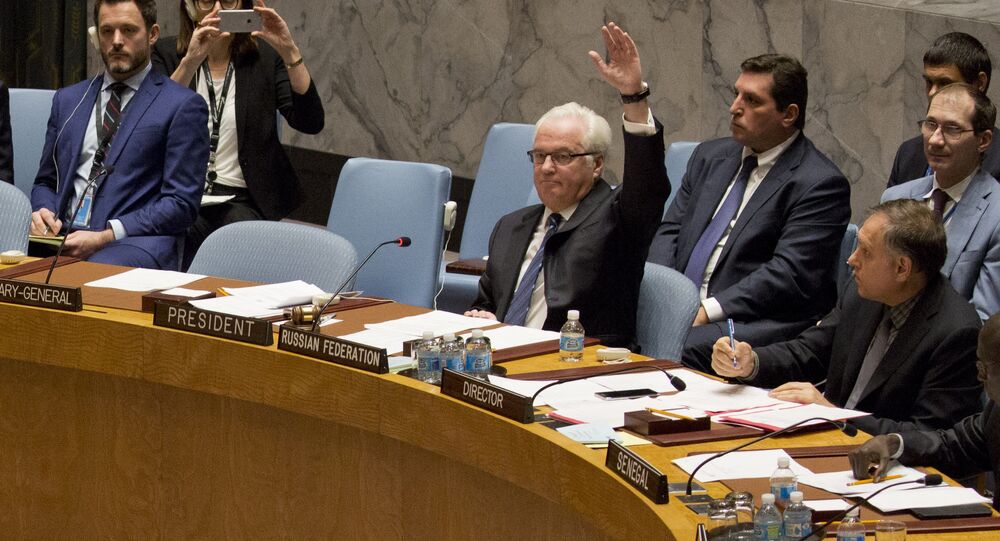 United Nations should provide evidence if it claims that Russia is conducting aerial bombardments since the introduction of moratorium on air strikes, Russian Ambassador to the United Nations Vitaly Churkin said at a UN Security Council meeting.

UNITED NATIONS (Sputnik) — On Tuesday, the Russian General Staff said the moratorium on Russian and Syrian airstrikes in the ten-kilometer radius (6.2 mile radius) around Aleppo, effective since October 18, will be extended.

© Sputnik / Mikhail Alaeddin
Russia, Syria to Extend Moratorium on Airstrikes in, Around Aleppo

"The moratorium on flights has been in place for eight days. Give us at least one proof or leave those narratives for a romance you would probably write later," Churkin stated on Wednesday.

Churkin made the comments in response to allegations by UN Emergency Relief Coordinator Stephen O’Brian earlier during the UN Security Council meeting.

The Russian ambassador further stated the parties to the conflict have not had the moral fortitude to allow medical evacuations from the besieged city, all the while "Syrian and Russian forces from air and land demonstrated a willingness to protect what meagre medical facilities still function inside eastern Aleppo."

Russia Does Not Seek, Want UN Gratitude for Actions in Aleppo

Russia is not looking for nor does it need expressions of appreciation from the United Nations regarding Moscow’s actions in the Syrian city of Aleppo, Russian Envoy to United Nations Vitaly Churkin said in response to claims to the contrary by US Ambassador Samantha Power.

"She [Power] says we want gratitude. We don't need your gratitude," Chrukin stated.

Speaking at the meeting earlier, Power said that what Russia really wants from the United Nations is credit. She subsequently added that one does not get congratulations and credit for not committing war crimes for a day or a week.

The UN Security Council met on Wednesday to hear the report of the UN Relief Coordinator Stephen O'Brien on the situation in Syria and was scheduled to go for closed consultations afterward.

However, the debate became heated after the remarks by Power and the consultations continued in public format.

Speaking after the meeting, Churkin promised to have more Security Council gatherings in open format noting that Russia is fully prepared for them.

'Best Recipe': Aleppo to Return to Normal Life Only if Terrorists Leave City