Fundraisers expect US Democratic party presidential candidate Hillary Clinton to alter her policy to bring it more in line with their goals, the WikiLeaks whistleblowing website revealed on Saturday. 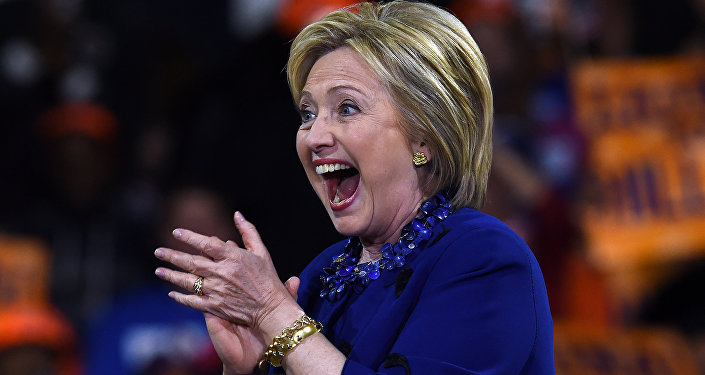 © AFP 2019 / Jewel SAMAD
US Journalist Advised Clinton to 'Slaughter' Trump Over 'Bromance With Putin' – WikiLeaks
WikiLeaks released the 15th batch of emails of Hillary Clinton's campaign chair John Podesta October 22. The emails have allegedly been obtained from a hacked account and have been made public in a series of releases throughout October.

Saturday's release includes an email from Steven Bakalar, a fundraiser with Barack Obama's 2012 presidential campaign, apparently seeking reassurance for big donors that they are "part of the team" and that the former secretary of state wouldn't mind "tweaking policy," among other things, "to get them re-engaged."

"As you know, quite a few major Obama raisers and donors have been put off by the way they've been treated," Bakalar wrote to Podesta in May 2015, noting that "big donors usually have ideas/advice and want to feel like they are being heard."

Among the 1,000 newly published emails are some calling former Center for American Progress (CAP) Vice President Faiz Shakir a "f**ker" for advising Sanders, incorporating Martin Luther King Jr. quotes into Clinton speeches and saying staff can be fired for leaks that occur without any proof of their guilt.

"I am happy to fire someone for leaking whether they did or they didn't just to make the point," Podesta wrote in March 2015 in an email to Philippe Reines, senior advisor to Clinton when she was secretary of state and later deputy assistant secretary of state.

© AFP 2019 / Jewel Samad
WikiLeaks Releases 15th Batch of Clinton Campaign Chair Podesta's Emails
Groundless accusations appear to be second nature for Clinton's supporters. Podesta, with no evidence on the table, has already accused Russia of hacking him in a bid to "throw the election to Donald Trump," one of many repetitions of this epic conspiracy theory.

Podesta is a long-term associate of the Clintons and was President Bill Clinton's chief of staff from 1998 until 2001.

WikiLeaks has already released half of the 50,000 mails it vowed to publish in the run up to the presidential election November 8.

The first batch was uploaded on the whistleblowing website on October 8. On October 20, WikiLeaks also published a bunch of letters sent to or by Barack Obama before he became US president.