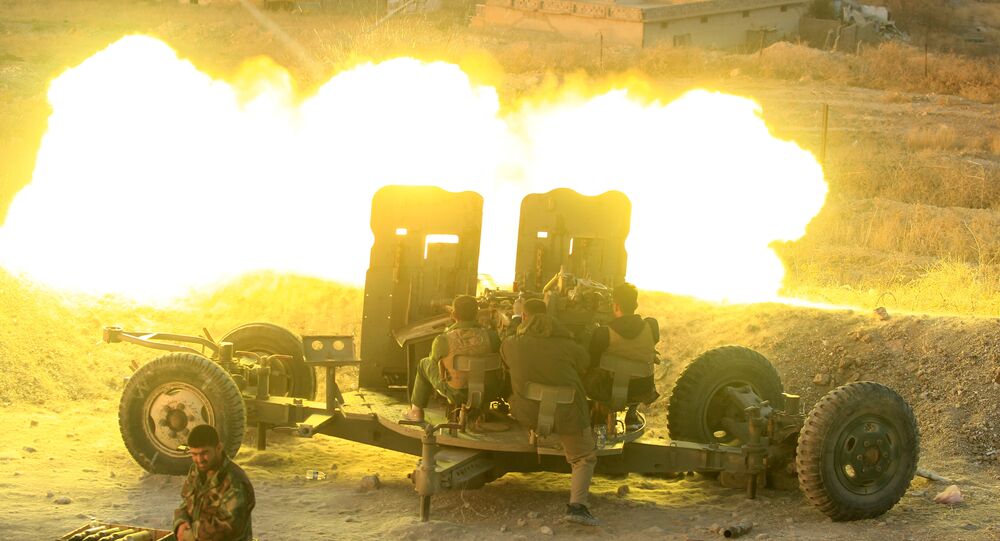 US Coalition's Victory in Mosul 'to Come at High Humanitarian Cost'

The Mosul operation will come at a great humanitarian cost, given the large number of Iraqi civilians held hostage by Daesh terrorists. The jihadists are using the civilians and their children as human shields to discourage the US-led coalition's airstrikes.

While there are no doubts that the US-led coalition together with Iraqi armed forces and the Kurdish Peshmerga will finally prevail in the battle for Mosul, the victory is likely to come at a high humanitarian and political cost, Strategic Forecasting, Inc. (Stratfor), also dubbed a "shadow CIA," reports.

"Aid agencies have warned that the offensive to retake the city will further degrade the humanitarian situation in northern Iraq," Stratfor's report reads.

According to the global intelligence firm, the operation could raise Iraq's civilian casualty rate because of the large number of civilians who remain in the city.

"Since the campaign began Oct. 17, families have been fleeing by the hundreds, adding to the 4 million Iraqis displaced by Islamic State since January 2014. An estimated 200,000 people are expected to be displaced from Mosul and its environs by Oct. 28, and by the end of the battle, that number will be closer to 1 million," the report states, adding that many of Mosul's roughly 750,000 residents have been currently trapped in the city and used by Daesh terrorists as human shields to discourage the US-led coalition's airstrikes.

© REUTERS / Goran Tomasevic
'A Big Electoral Show': Mosul Liberation Will Not Be the 'Defeat of Daesh'
According to Stratfor, from the beginning of Daesh's occupation of Mosul most city dwellers have fled to Kurdish territories. According to the United Nations, about 960,000 displaced persons are now being hosted by the Kurdistan Regional Government (KRG).

"Paralyzed by budgetary and political crises, the KRG is alarmed by the prospective onslaught of people from Mosul, stating that it cannot accommodate many more," the report warns.

While Turkey and Jordan have tightened their borders with Iraq, international humanitarian organizations are seeking to fund settlements in Iraq to absorb the displaced persons.

To make matters worse, camps and sanctuaries are full almost everywhere in Iraq. "Many people leaving Mosul will have to crowd into existing camps and shelters, exacerbating the tenuous security and health conditions in these settlements," the report points out.

© AFP 2021 / SAFIN HAMED
Iraqi Operation to Liberate Mosul to Include a 'Corridor' for Daesh Militants Fleeing to Syria
Meanwhile, in Syria international agencies are preparing for the influx of refugees from Mosul, estimating the number of asylum seekers at 90,000, Stratfor analysts report.

Given Daesh's chemical weapon capabilities, the Coalition fears that the terrorist group may use WMDs and suicide attacks to protect its positions in Mosul. Two days ago Daesh fighters set Mishraq's sulphur plant near Mosul on fire causing the spread of toxic smoke, media reported Saturday.

On the same day, CNN reported that 284 men and boys were slaughtered by Daesh in the Mosul area, citing an Iraqi intelligence source.

On Monday, United Nations Children's Fund representative in Iraq Peter Hawkins warned about the possibility of heavy casualties among children.

"Mosul's children have already suffered immensely over the past two years. Many could be forcibly displaced, trapped between fighting lines, or caught in the cross fire," Hawkins stressed in an official press release.

With about 750,000 civilians held hostage by Daesh in Mosul, the US-led coalition's operation might become even bloodier than the battle for Aleppo.

On October 17, Iraqi Prime Minister Haider Abadi announced the beginning of the military campaign aimed at retaking the Iraqi city of Mosul from Daesh terrorists. According to local media, about 30,000 Iraqi soldiers and 4,000 Kurdish fighters are participating in the operation backed by the US-led Air Force.