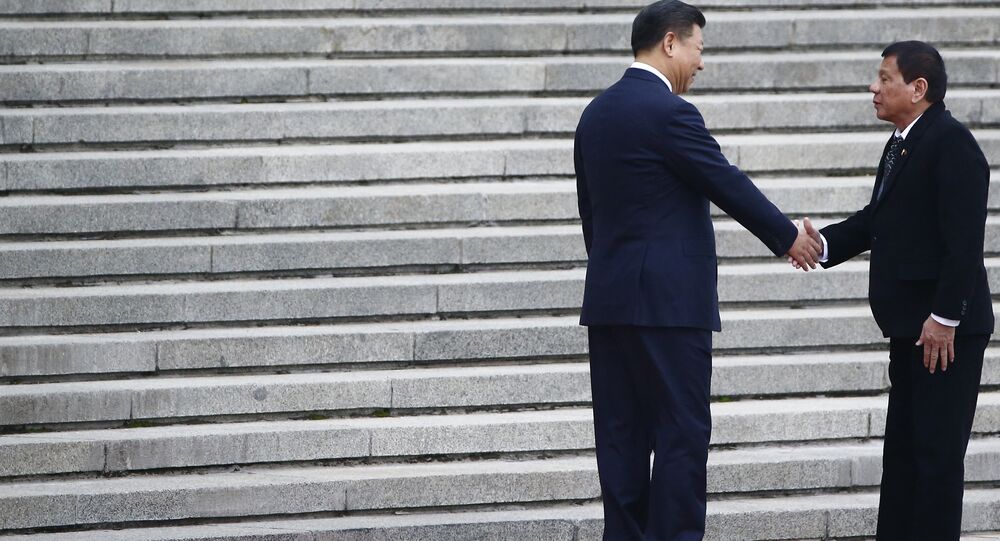 The rapprochement between the Philippines and China is going to be a headache for the United States as it will restrict its influence on Beijing-Manila ties.

Washington is unlikely to be happy with the emerging cooperation between Beijing and Manila. There is an "American factor" in Chinese-Philippine relations but its influence is limited, Shishun said.

"The Philippines realized that China is a friend. Previously, Manila conducted a one-dimensional foreign policy which was close to the interests of Washington. As a result, ties between China and the Philippines reached a deadlock. Now the Philippine government understands the importance of cooperation with Beijing. China is not a superpower seeding global chaos. Instead, Beijing gives to its partners the opportunity to develop," he pointed out.

Possible, the US would create hurdles for cooperation between China and the Philippines, as part of its rebalancing strategy in the Pacific, the expert suggest. However, if Washington keeps "spreading chaos" this will only damage its global reputation.

© AP Photo / Xinhua, Wang Cunfu
Beijing Testing Newfound Approach to Easing Tensions in South China Sea
The talks between the Philippines and China resulted in 13 cooperation agreements. The countries also agreed to develop cooperation between their coastguards, as part of the emerging dialogue on South China Sea territorial disputes.

Shishun underscored that the South China Sea issue should be the key point in bilateral consultations.

"The problem exists and shouldn’t be ignored. However, the current approach to the problem is correct. Duterte realized that the dispute can be resolved only at the negotiating table," the expert said.

© REUTERS / Soe Zeya Tun
Foreign Policy Shift? Philippines' Duterte Heads to China Amid Tensions With US
Until the dispute is settled Manila and Beijing could develop cooperation in the South China Sea. Beijing has already proposed to jointly develop the disputed areas.

The professor noted that there are a number of spheres for joint efforts in the region, including sharing of intelligence data, anti-smuggling actions, fishing and exploring resources of the sea.

In addition to the South China Sea problem, Manila and Beijing have potential for strategic cooperation in the region.

"Analyzing Duterte’s visit to China, I’d like to underscore that the Philippine leader realized who is the real friend for his country. I think he already took some lessons from the current global turbulence, especially the Syrian crisis and efforts to change regimes in the Middle East and North Africa. Such developments are very dangerous for any country," Shishun said.

Unlike the United States, China plays a "constructive role" in the international arena, he added.

"The Philippine leader also understands the importance of China’s initiatives for ASEAN members, including the Silk Road Economic Belt project, the Asian Infrastructure Investment Bank and a free trade zone between Beijing and ASEAN. Moreover, such countries as Malaysia, Cambodia and Thailand also have territorial disputes with China, but at the same time they have lucrative cooperation with Beijing," the expert said.