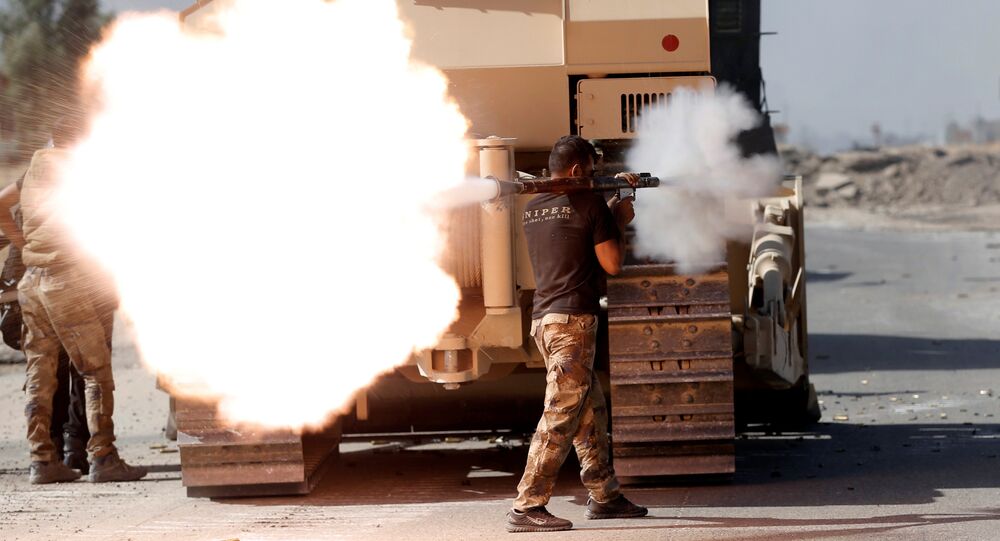 American global intelligence company Stratfor published a report on the advances of the Iraqi coalition near the Iraqi city of Mosul.

© AFP 2021 / Mauricio LIMA
Washington 'Switches' to Mosul Amid Inability to Reach Military Success in Aleppo
In the report, Stratfor also published a map and satellite images of the area around Mosul where the Iraqi army and its allies are gaining ground against Daesh.

The current operation is its sixth attempt to liberate Iraq’s second-largest city from terrorists, however this time it involves a large number of forces, including the Iraqi Army, Kurdish Peshmerga fighters and Shiite militias.

"As the Iraqi coalition offensive approaches the outskirts of Mosul, Islamic State [Daesh] fighters are rapidly losing terrain in spite of the various tactics they have employed to try to slow the advance by Iraqi security forces and Kurdish peshmerga," the report read.

© REUTERS / Zohra Bensemra
With Mosul Liberated, 'Daesh Terrorists Would Move to Other Countries, Including Turkey'
Despite suicide vehicle bomb attacks by Daesh and attempts to block the offensive, the "tide is starting to shift against the militants," it added.

The situation is complicated by the uncertainty over the future of the militants who are currently in Mosul. Earlier, it was reported that Washington and Saudi Arabia planned to establish a corridor to let the terrorists leave the city and move to Syria.

If the Iraqi coalition retakes Mosul this could further escalate the situation in Syria, political analyst Alexander Butshkovsky told RT.

"It’s too early to say that Daesh will be weakened because the financial part of the group is in Libya. The coalition is not targeting this part of the group. The liberation of Mosul is important but it will not be the defeat of Daesh. After Mosul, they’re likely to move to Syria which could result in an escalation there," he said.

In fact, the operation in Mosul is part of the US electoral campaign, said Sergei Seregichev, an expert at the Institute for Middle Eastern Studies.

"The liberation of Mosul is a big electoral show. There will be corridors for terrorists to leave. They also receive weapons, ammunition and food supplies," he said.

According to him, the US will not cleanse the entire city of terrorists.

"In a city where 90 percent of the residents support Daesh, this would result in a bloodbath. Washington doesn’t want this. The US wants to liberate the city to have a nice TV picture before the election," Seregichev pointed out.