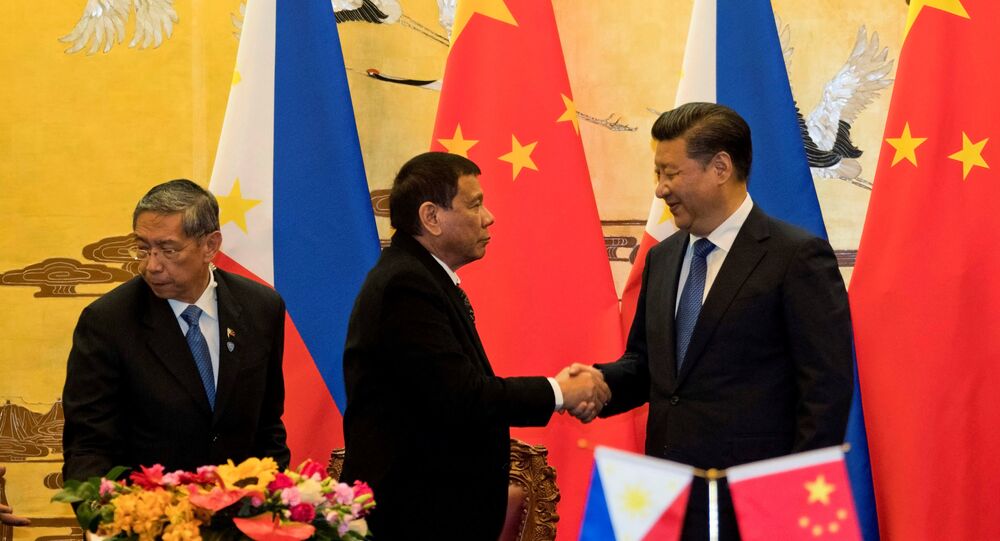 Manila's new foreign policy strategy presumes establishing diversified contacts with a wide range of new allies, including China and Russia. The country will also continue to cooperate with the US, but only on equal terms, a specialist in Southeast Asian studies at the Moscow State Institute of International Relations Larisa Efimova told Sputnik.

© Flickr / Benjie Ordoñez
Philippines Defies US, Vows to Pursue Own Interests in Talks With China
Recently, prior to a major visit to China, Philippine President Rodrigo Duterte made another bold statement towards the United States.

"I will break up with America," the president declared in a speech, adding that he would rather "go to Russia and to China."

The statement has provoked suggestions that Manila is preparing a dramatic change in its foreign policy, including turning away from one of its main allies, the US.

In addition to the fact that Duterte recently made global headlines with diatribes towards US President Barack Obama, he has a long story of anti-Washington moves.

For example, when he was the mayor of Davao City, Duterte rejected the plan to build a US drone base on Mindanao Island. He also actively opposed an agreement with Washington to give US troops the right to land in the country. In September, Duterte said he was "about to cross the Rubicon" with the US, reiterating his intention to distance from Washington and turn to China and Russia.

The president is currently joining a large business delegation for a visit in China. Manila sees Beijing as a potential source of investments for its infrastructure.

© Sputnik / Vitaliy Belousov
MiGs for Manila: What Happens if Moscow Starts Supplying Philippines With Arms
As for Russia, the Philippines is planning to develop economic and defense cooperation. In particular, Manila wants to buy Russian weapons. It was reported that the Philippine defense minister and a group of specialists were expected to visit Russia for talks. Duterte said that Manila had agreed a 25-year loan for arms purchases.

In a recent address to the army, Duterte said that the Philippines does not need US-made F-16 jet fighters because the country will not wage wars, but it needs turboprop aircraft to fight terrorism. The president underscored that he wants transparent deals and cheap weapons.

According to HIS Jane’s, this year, the country increased defense spending by 60 percent against the previous year, to $254 million. According to the Stockholm International Peace Research Institute (SIPRI), the US accounted for 70 percent of arms imports to the Philippines. At the same time, Russia and China never delivered arms to Manila.

They discussed cooperation issues in defense and regional security. Russia proposed to establish a Russian-Philippine partnership on defense issues.

© REUTERS / Thomas Peter
China Hopes for 'New Page' in Ties With Philippines
Some international experts commented that Manila made a step against the US and China. However, the majority of specialists believe that Manila is turning away from unilateral ties with Washington to a more broad range of partners.

The Philippines will not abandon cooperation with the US but will try to diversify its relations and look for more advantageous forms of cooperation with other partners, said Larisa Efimova, a specialist in Southeast Asian studies at the Moscow State Institute of International Relations.

"The US turned the Philippines from a poor Spanish colony into a more or less modern country. This is a fact. But Washington always considered Manila a very loyal ally. Actually, it was until Duterte became president. After he assumed power he began portraying himself as a man who would make no concessions in exchange of the national interests," Efimova told Sputnik Japan.

"Duterte’s goal is to counterbalance the US influence in the region. At the same time, Manila will never end cooperation with Washington. Otherwise, there is the risk that the country will be swallowed by China," the expert pointed out.

The Philippines will have economic and trade ties with all partners, without granting preferences to any of them. The country needs investments and will diversify its economic ties.

"However, Manila will remain independent in its policy. The country will not be bound to any superpower because this restricts the scope for maneuvering," she added.