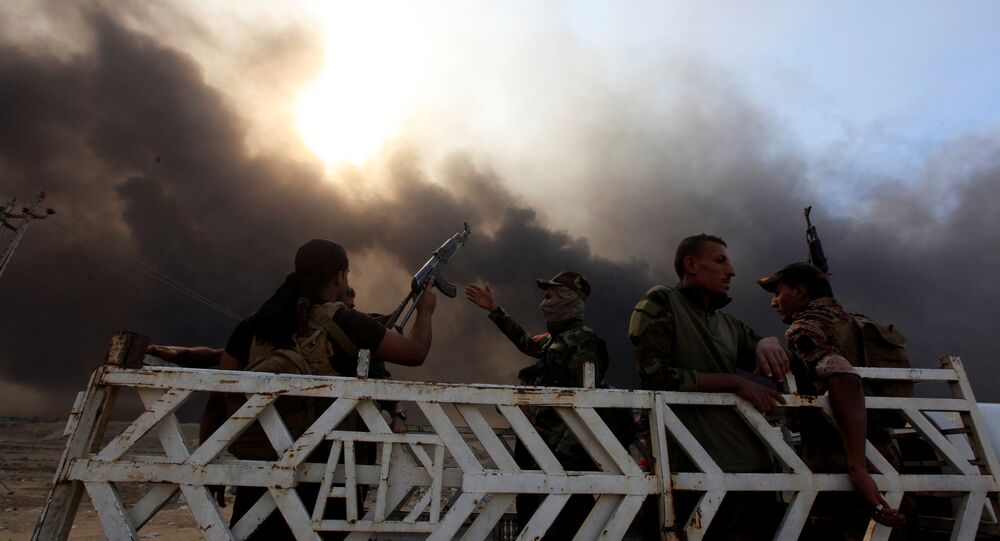 Russian Foreign Ministry spokeswoman Maria Zakharova commented on the situation in Syria's Aleppo, the battle to liberate Iraqi Mosul and the blocking of RT's accounts in the UK during her weekly press briefing in Moscow.

Neither Russian, nor Syrian aviation carried out strikes in Aleppo, she said. Meanwhile, terrorists have already begun to shell civilians who want to leave the city, Zakharova said.

She said that the US is unable to force militants to withdraw from the Castello road in Aleppo. The US' inability to abide by its commitment has caused the crisis in Aleppo, Zakharova noted.

"The US has still not been able to force the armed opposition to withdraw its forces from Castello road. This would have opened up humanitarian access to civilians trapped by militants. Nothing has been done for the so-called moderate opposition leaders to distance themselves from Daesh and al-Nusra Front terrorists."

"I would like to emphasize that the difficult situation there has unfolded as a result of the US' failure to comply with its obligations within the framework of the September 9 Russian-US agreements," Zakharova added.

© REUTERS / Abdalrhman Ismail
Putin Not Ruling Out Extension of Humanitarian Pause in Aleppo – Kremlin
She said that the humanitarian crisis in Syria is caused by illegal Western santiions against Damascus.

Moscow hopes that "external sides which are able to influence the squadrons of the armed opposition will use this chance to convince their subjects to make Nusra Front terrorists leave eastern Aleppo," she said.

Moscow yet again called for separating terrorists and Syrian rebels.

A total of eight humanitarian routes opened to allow people escape the besieged city – six are intended for civilians and two for militants willing to lay down their arms. The humanitarian pause entered into force earlier on Thursday.

Zakharova slammed the attempt to "redirect" Daesh terrorists from Mosul to Syria as "counterproductive" amid the operation to liberate the Iraqi city.

"It is a crime. If they head to Syria, they will join the jihadist groups… fighting against government forces. Such a policy is frankly hypocritical; it is destroying the basis for the fight against international terrorism coordinated in the framework of the UN Security Council's decisions."

Earlier,the Pentagon said that Daesh commanders are fleeing Mosul to Syria, while foreign fighters remain in the city.

© REUTERS / Alaa Al-Marjani
These are Reasons Why Coalition's Efforts in Mosul Risks Becoming a 'Catastrophe' for Middle East
However, she said that Moscow supports Iraq's fight against Daesh that ensures sovereignty and territorial integrity of the country.

Russia will consider the request for the delivery of humanitarian air to Iraq amid the Mosul operation if receives one, Zakharova said.

Blocking of RT's Accounts in UK

© Sputnik / Evgeny Biyatov
UK's RT Clampdown Could Echo US 'Information War' Against Russia
Zakharova said that the decision to block RT's accounts by a UK bank is politisized. She added that the UK government misinforms Russia over the blocking of RT's accounts in Britain.

RT's Editor-in-Chief Margarita Simonyan said that the international broadcaster's accounts have been blocked in the United Kingdom. RT UK said it had been informed by NatWest, a large state-owned retailer, that its banking arrangements with RT were null and void.

Nobody from the UK bank that blocked RT accounts got in touch with the broadcaster's management to discuss the issue, Zakharova said.

"We would like to officially say that nobody from the bank contacted the management of the broadcaster verbally or in writing to resolve the situation or to even discuss it," Zakharova said.

© AFP 2020 / BRENDAN SMIALOWSKI
White House Praises Arrest of Alleged Russian Hacker in Czech Republic
The arrest of a Russian national in the Czech Republuc at the US' request is proving that Washington is "hunting" for Russians abroad, Zakharova said.

On Tuesday, Czech police said it detained an alleged Russian hacker, who was believed to participate in cyberattacks on the United States, jointly with the FBI.

"This is not the first time [Russian citizens were detained abroad at the US' request]. What happened was another proof of the "hunt" by the US law enforcement authorities for Russian citizens around the world," Zakharova said.

Moscow works with Czech authorities not to let the extradition of the Russian citizen, Evgeny Nikulin, to the United States, she said.