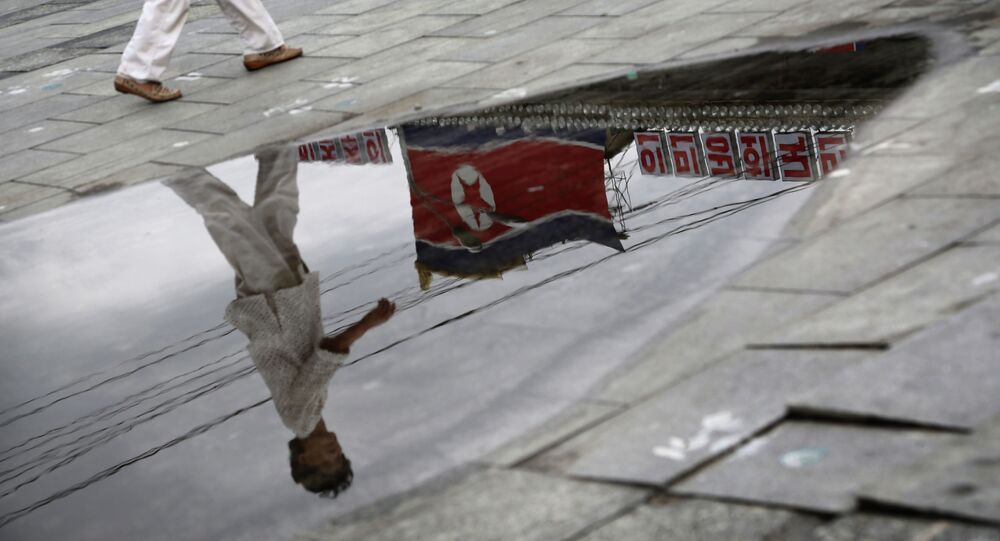 A North Korean high-ranking diplomat was reported to hold several behind the curtains meetings with US officials. Sputnik discussed this development with the head of the Center of Russia's strategy in Asia at the Institute of Economics, Georgy Toloraia.

North Korean Deputy Foreign Minister Han Song-ryol was seen at the Beijing Capital International Airport. According to reports the diplomat will travel to Malaysia for informal talks with the representatives of the United States, Kyodo news agency reported.

© REUTERS / Joseph Campbell
When in Doubt, Impose Sanctions: US Attempts to ‘Lean On China’ Using North Korea as Pretext
In May, Han Song-ryol made a similar trip to Sweden, where he made contact with the former diplomats from the United States.

In September, Pyongyang was visited by a private US delegation, headed by former governor of New Mexico, Bill Richardson, who has experience handling behind the scenes dialogue with representatives of the DPRK.

Sputnik spoke with the executive director of the National Committee for the study of BRICS, head of the Center of Russia's strategy in Asia at the Institute of Economics, Georgy Toloraia.

Toloraia said that the exchange of opinions between experts from both countries has been going on for a while. It is not something new and the dialogues have included other regional forces as well, such as China and Russia.

“Currently, in the US, there is an ongoing discussion about the fairness and rationality of the policy pursued by Obama. Indeed there is a fierce debate about this notion from both opposite sides. The discussion is primarily about the so-called policy of ‘strategic patience’ pursued by the US with respect to North Korea,” Toloraia told Sputnik.

© REUTERS / KCNA
Pentagon Chief: US Troops Poised To ‘Fight Tonight’ Against North Korea
The analyst said that one side is voicing its opinion saying that there was no need to tolerate the North Koreans and pressure should have been applied on their policies, even military involvement if necessary.

However, there is an opposing view to this as well, which strongly criticizes the US’ passive aggressive manner towards DPRK which resulted in the country’s nuclear build up.

“It is difficult to say at the moment which side will prevail in the future. Nevertheless, today the contact between the American and the North Korean sides is expected to continue in the background of preparation for the US presidential administration change,” Toloraia said.

The analyst explained that according to him, it seems that the US doesn’t really know what it wants from North Korea.

Hidesi Takesada, professor at the University of Tokusёku, involved in studying the issues of the Korean Peninsula and their regional politics, told Sputnik that Japan will be one country which will receive benefits in case of an initiation of contact between the US and North Korea.

“The contact between the US and North Korea is taking place and in the future it is likely to become even more active. President Obama is not cornering a partner who has nuclear weapons on its hands.”

He further said, “I think that the American approach to Iran and Cuba will also be applied toward the DPRK. Japan has a chance to resume bilateral consultations with North Korea,” Takesada said.

The professor also said that the US will likely maintain this approach even after the presidential elections which will be held in November.