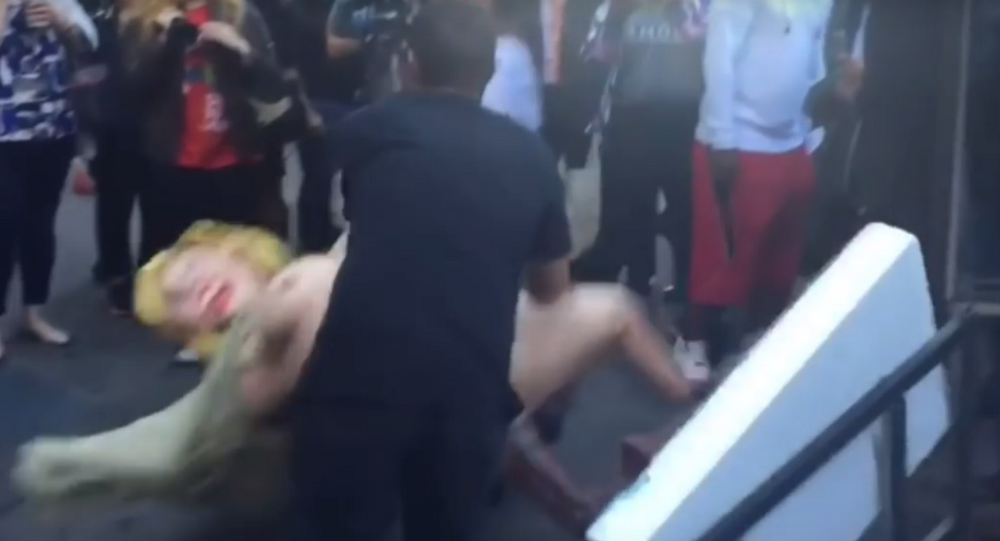 Months after naked statues of Republican presidential hopeful Donald Trump appeared in major US cities, an artist erected one of rival Hillary Clinton in Manhattan on Tuesday. The response was lively.

Created by 27-year-old Anthony Scioli, the Clinton statue was set up outside of Bowling Green subway station in downtown New York at roughly 6:00 AM, portraying the Democratic candidate as having hoofed feet while holding a banker to her chest.

Within three hours, an offended morning commuter knocked the statue to the ground.

"This is obscene!" the woman shouted, identified by the New York Daily News as an employee of the nearby National Museum of the American Indian.

INDECLINE
The Emperor in San Francisco

"To put something up like this in front of my work place…I shouldn’t have to see this," she told the paper.

The woman fought with Scioli, who repeatedly attempted to stand his statue back upright. Onlookers gathered around the scene, with some taking the side of the woman, and others siding with the artist’s right to express himself.

The statue was eventually removed by police, who said the artist did not receive the proper permits.

In August, similarly grotesque displays of Trump were erected in New York, Cleveland, Los Angeles, San Francisco, and Seattle. Called “The Emperor Has No Balls,” the project was done by anarchist collective INDECLINE, who said their intention was in "exposing" the candidate.

INDECLINE
The Emperor in New York

"As Donald Trump miraculously inched his way towards the Republican Party nomination, we couldn’t help but watch in awe, completely dismayed as one of the world’s biggest potential threats stole the hearts and minds of our country’s most malleable and in some cases, fanatical citizens," read a statement from the group.

"These fleeting installations represent this fleeting nightmare and in the fall, it is our wish to look back and laugh at Donald Trump’s failed and delusional quest to obtain the presidency."