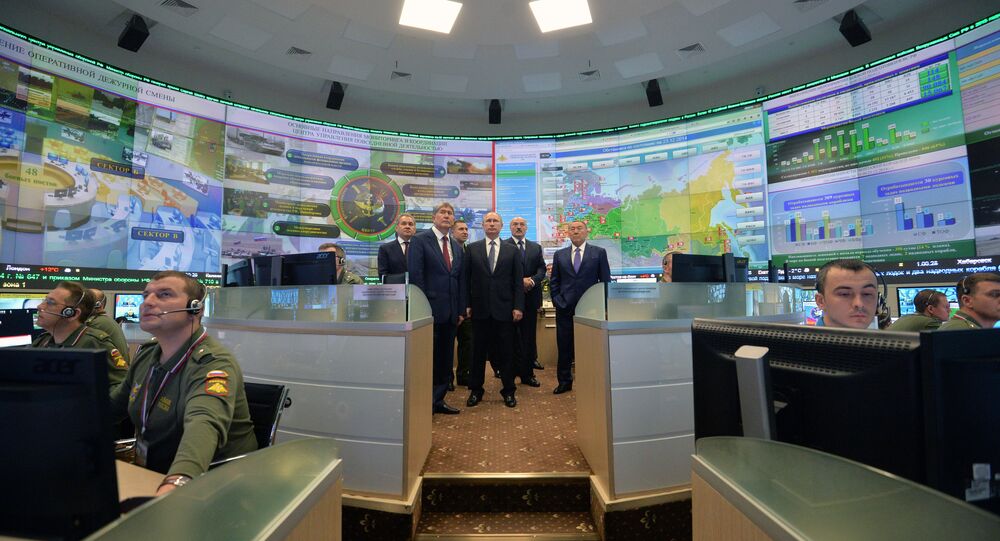 On Friday, leaders of the Collective Security Treaty Organization, a defensive alliance including Russia and five other states, met in Yerevan to adopt the bloc's new security strategy to the year 2025. Political analyst Gevorg Mirzayan says that now more than ever, bloc unity is vital to ensuring security in Europe, the Caucasus and Central Asia.

© Sputnik / Vitaly Ankov
CSTO Warns Against Unilateral Missile Defense Efforts As Threat to Global Stability
In addition to the new broad security strategy, officials from the CSTO's six member states – Russia, Armenia, Belarus, Kazakhstan Kyrgyzstan and Tajikistan, signed a number of documents aimed at streamlining operations under the bloc's framework, including the creation of a crisis response center aimed, among other things, at the exchange of information and analysis on security-related subjects in real time.

The members adopted a separate statement on the Nagorny-Karabakh conflict between Armenia and Azerbaijan, which exploded in April of this year, leaving at least a hundred soldiers and civilians dead in clashes that took place between April and May. The bloc also approved the creation of single, unified list of terrorist groups.

"A number of serious documents and decisions, related to the significant strengthening of the organization's potential, improvement of the collective security mechanisms and working bodies, were approved," Armenian President Serzh Sargsyan said at a press conference on Friday in Yerevan.

© Sputnik / Alexei Druzhinin
October 14, 2016 meeting of the CSTO Collective Security Council in Yerevan, Armenia.
© Sputnik / Alexei Druzhinin
CSTO Leaders Approve Development Strategy Until 2025 - Armenian President
Commenting on the summit in an article for Expert magazine, Gevorg Mirzayan, associate professor of political science at Russia's Financial University, emphasized that to get a sense of the CSTO's role in maintaining security in the former Soviet space, it's necessary to understand what the organization is actually designed to accomplish.

What it is not, Mirzayan stressed, is an organization aimed at coordinating members' foreign policy, including policy using military power. What it is, as its name hints, is a defensive alliance, an organization for 'collective security'. In other words, while its members' foreign policy views and objectives may vary, "this does not contradict the real goals and challenges facing the CSTO; these goals are very specific, and the bloc is coping with them effectively on all fronts."

Paradoxically as it may seem, the analyst noted that the so-called western direction, facing Europe, "is considered the safest. It's true that Belarusian President Alexander Lukashenko stated the need to 'force' the North Atlantic Alliance to recognize the CSTO. It's also true that anti-Russian war hysteria has exploded in Western countries, to the point of talking about attacking Russia with a preemptive nuclear strike. Legally, in case of a NATO attack on Belarus and Russia, all CSTO member countries will be forced to go to war, even if they themselves do not face the threat of invasion."

Hopefully, Mirzayan suggested, the tone of NATO countries' rhetoric, particularly that coming out of Washington, will return to some sense of normalcy following elections in November, even if relations between the collective West and Russia don't improve.

In the Caucasus, one of the key challenges facing the organization is preventing the resumption of the Armenian-Azerbaijani war in Nagorno Karabakh. "Since Armenia is a member of the CSTO, its members, including Russia, must guarantee the security of Armenian territory. From this perspective, the bloc was faced with a serious test in the events of April, when Baku initiated hostilities in the region which affected Armenian territory."

© REUTERS / Abdalrhman Ismail
Russia Expects SCO, CSTO, CIS States to Join Aleppo Humanitarian Operation
In that conflict, given complications stemming from the Nagorno Karabakh's legal status, Armenia did not formally request CSTO assistance. "Yerevan may have a variety of motives for acting as it did, but the result was obvious – the CSTO avoided having to intervene to the local strategic provocation by the Azerbaijani side."

"Of course, this does not mean that the alliance will not face real tests on the Armenian front in the future," Mirzayan stressed. "Given Baku's current stance, and President Ilham Aliyev's unwillingness to tolerate the freezing of the conflict, we may expect new, much more serious military actions by Azerbaijan. And when it is no longer a matter of a local provocation, but a full-scale offensive, Yerevan will be forced to activate the relevant article of the CSTO."

"In order to prevent this from happening…Moscow [and the entire alliance] will have to make an effort to freeze the conflict in place, and convince Baku that such a war would have unpleasant consequences for Azerbaijan."

The Central Asian Theater of the CSTO may face the most serious challenges of all, according to the expert.

"First and Foremost, this is in connection with events in Afghanistan. That country's chronic instability, and the local military successes of the Taliban, are concerning for the Tajik government." In the past year alone, the Tajik military built 84 border outposts, with another 100 currently under construction, to prevent Islamists moving north.

© AP Photo / Najim Rahim
An Afghan National Army soldier, left, shouts against the Taliban, after firing a rocket towards Taliban positions, on the outskirts of Kunduz, northern Afghanistan (File)

"The situation has been exacerbated by the difficult political and economic situation in Tajikistan, Kyrgyzstan and Uzbekistan, which suspended its CSTO membership [in 2012], giving rise to the a radical Islamist 'fifth column' within these states," Mirzayan added.

© Sputnik / Vladislav Belogrud
Russian Drones Help Destroy Simulated Enemy at CSTO Drills in Kyrgyzstan
Ultimately, the analyst suggested that the defense bloc understands perfectly well the danger which emanates out of the region, and has taken appropriate measures, including the creation of a unified list of terrorist organizations.

"However, it's obvious that this in itself is not enough to effectively confront existing threats. What's needed is the development of a common strategy for fighting terror." In additional to tackling Islamist fighters militarily, this would require efforts to modernize the Central Asian members' economies and polities, something that outside the scope of the CSTO's mandate. In other words, efforts here will require additional efforts, by Russia, other CSTO members, and other regional powers.