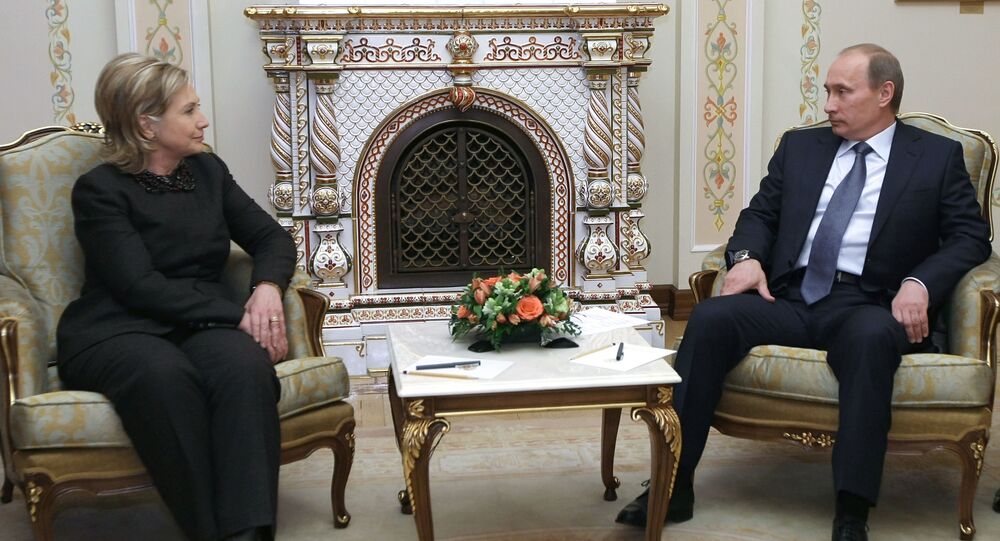 In a paid speech released by WikiLeaks, the former Secretary of State said before a group of North American oil and natural gas tycoons that Russians were infiltrating with fake anti-fracking and environmentalist groups.

One of the leading critique lines against Donald Trump during this presidential election was his controversial statement that “climate change is a hoax” perpetrated by the Chinese in order to undercut the US economy – a statement that he has since modified due to its laughable content if taken literally – in a shocking (yet somewhat predictable at this point) development Hillary Clinton soberly made a mirroring statement in a paid speech for oil executives blended with her patented anti-Russia hysteria.

© REUTERS / Abdalrhman Ismail
Did Hillary Call for ‘Killing a Lot of Civilians’ in Syria During the Debate?

In the 2014 speech, Hillary told the audience, "We were up against Russia pushing oligarchs and others to buy media. We were even up against phony environmental groups, and I’m a big environmentalist, but these were funded by the Russians to stand against any effort, oh that pipeline, that fracking, that whatever will be a problem for you, and a lot of the money supporting that message was coming from Russia."

Of course, the stand against fracking and oil pipelines like the Keystone XL came not from Russia, but from the progressive wing of the Democratic Party that largely backed her primary opponent Bernie Sanders out of concern about her sincerity when speaking about these critical issues in light of her past statements and practices as Secretary of State in favor of hydraulic fracturing.

Studies have linked the practice to a startling uptick in "man-made" earthquakes as the release of fracking fluid into the earth’s core causes new fault lines to develop – a reality that has ravaged several US states most prominent of which is Oklahoma where people report rattling earthquakes regularly.

The practice has also been a concern for environmentalists concerned about water contamination which has been reported frequently in areas that conduct fracturing with a number of viral YouTube videos of people even being able to take a match to their tap water to emit a large flame. The process theoretically, with proper sealing, can be conducted without this consequence but in practice such failures occur often.

Hillary Clinton maintained during the primary election that she opposed the process of fracking as well as major expansion to oil and natural gas pipelines, but these statements appear to fly in contrast to those espoused views with the Secretary of State even incorporating a Russian conspiracy into any efforts to stop the environmentally ruinous practices.

It is notable that the speech occurred in 2014 before she officially began running for office signaling that her hysteria that Russians are lurking behind anything that she opposes is not merely a contrivance in response to leaked documents in the 2016 election but rather speak to some broader issue in her thinking.