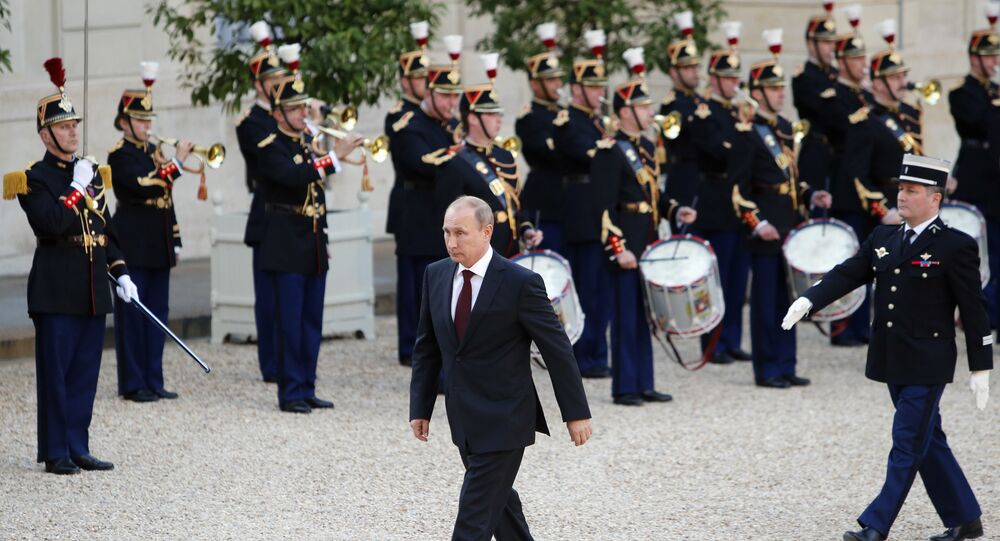 Kremlin spokesman Dmitry Peskov has said that Russia continues preparations for an upcoming visit of President Putin to Paris on October 19, which is set to focus on the ongoing Syrian conflict and the situation in Ukraine; meanwhile the French foreign minister has confirmed that the two countries have a common goal: to end the Syrian massacre.

© Sputnik / Sergey Guneev
Preparation for Putin's Paris Visit Continues After Hollande's Doubts on Talks - Kremlin
Russia continues preparations for an upcoming visit of Russian President Vladimir Putin to Paris, and there is no official information on him not meeting French President Francois Hollande, Kremlin spokesman Dmitry Peskov said on Monday.

The comment comes in response to the remark of the French president which has been perceived by some in the media as his "uncertainty" over the personal meeting with Vladimir Putin.

"I'm still asking myself the question," he said.

"Can we do anything that will make him [Putin] stop what he is in the process of committing with the Syrian regime, which is supporting the bombing of Aleppo's population by its air forces?" Hollande said.

Last week French Minister of Foreign Affairs and International Development Jean-Marc Ayrault came to Moscow for talks with his Russian counterpart Sergei Lavrov on the situation in and around Syria.

"As well as Russia, France advocates the decisive actions of the international community against terrorism," Jean-Marc Ayrault said at the joint press conference after the talks on Thursday.

"We know that in order to eradicate this evil, which embraces many countries, we should not provide it with the pretext for its propaganda," the French top diplomat then said.

"To stop the massacre in Aleppo — this is my message, my humanitarian message to 250 thousand Syrians which have been entrapped there. It is not too late to stop it. This is why I have come here," he added.

The French foreign minister also said that Russia is not an adversary of France, however Paris raises questions about Russia's military support of President Assad.

© Sputnik / Natalia Seliverstova
Lavrov: Daesh and al-Nusra Front Will Never Be Part of Ceasefire Regime
He further added that France thinks it is still possible to return to political negotiations and reach peace through the transition period, for which is necessary to give the go-ahead, even though it will take time.

"I came solely because of Syria. I didn't come with any threats, only to acknowledge a complicated humanitarian situation in Aleppo and find a solution to this massacre," Jean-Marc Ayrault said.

"Time is passing, we shouldn't hesitate as each new day brings new victims," he said.

"France is a long-time partner of Russia, and we deeply care about the quality of our relations with it," Russia's top diplomat said.