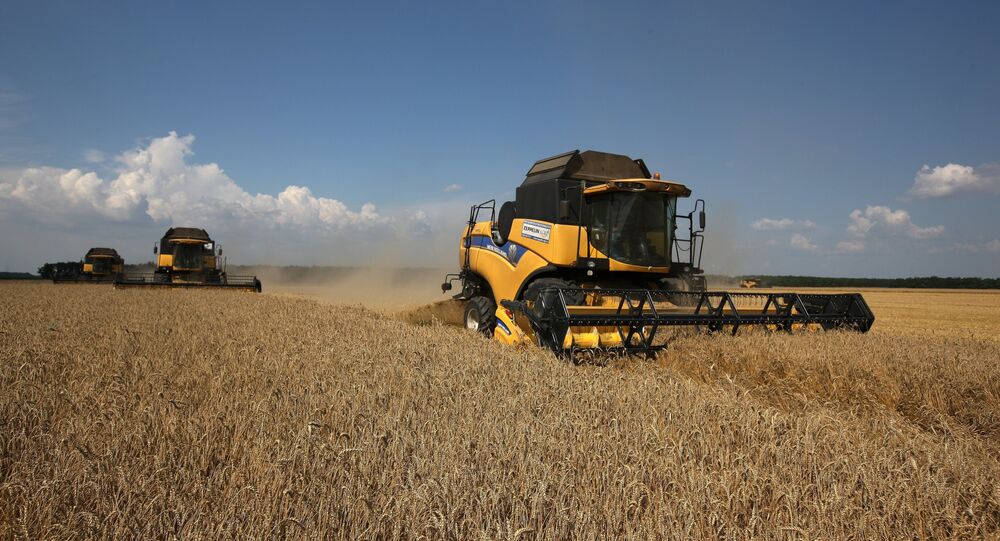 Russia has set an all-time record for the country's agricultural sector by harvesting almost 112 metric tons of grain by October 4. Furthermore, Russia is becoming the world's grain-export powerhouse, Bloomberg reports.

Russia is about to retake the leading role in the world's wheat trade it last held a century ago, Bloomberg admits, commenting on the country's record grain harvest.

"From the Black Sea coast and the Volga River heartland to the sun-scorched steppes of Siberia, Russia's farm belt is enjoying a renaissance, with grain at the leading edge. Turbocharged by the 45 percent drop in the ruble against the dollar over the last few years and bumper crops, local producers are crowding into export markets long dominated by big Western players," the media outlet underscored.

"Let me put it straight — this is an all-time record for the Russian agricultural sector," Russian Prime Minister Dmitry Medvedev underscored, as quoted by RIA Novosti.

Russia's previous record was broken in 2008 when farmers produced 108.2 million tons of grain.

© Sputnik / Vitaliy Timkiv
China Puts Stake on Investments in Russian Agriculture Sector
Citing the US Department of Agriculture, Bloomberg reminds its readers that last season Russia outpaced the US as a wheat exporter for the first time in decades. According to the media outlet, Russia is likely "to displace the EU from the top spot this year."

So far, Russia has entered into new grain markets, toppling its competitors. This year the main export destinations for Russian wheat are Egypt, the world's biggest buyer, Bangladesh, Mozambique as well as Indonesia, Mali, Malta, Mexico and Burma. Furthermore, this year Moscow struck export deals with Algeria and Morocco.

According to Russia's agricultural watchdog Rosselkhoznadzor, the country may also begin supplying wheat to Venezuela by the end of 2016.

Incredible as it may seem, it was the US-led sanctions policy that bolstered the growth of Russian agricultural sector that has taken advantage of embargo on EU food products and a weakened ruble.

On September 2, Agriculture Minister Alexander Tkachyov highlighted that Russia's grain output may reach 170 million tons a year by 2030 with annual exports of 64 million tons. Earlier this year, the minister signaled that the country plans to increase its grain production to 120 million tons per year by 2020.

"Russia will be among the top exporters for a long time, especially given the potential advances in productivity there. Other producers need to fight harder to maintain their traditional markets," Tom Basnett, general manager at Market Check, a Sydney-based commodity consultant, said, as quoted by Bloomberg.

"With our nature and climate, it's our destiny to be an exporter," Arkady Zlochevsky, president of the Russian Grain Union, told the media outlet.