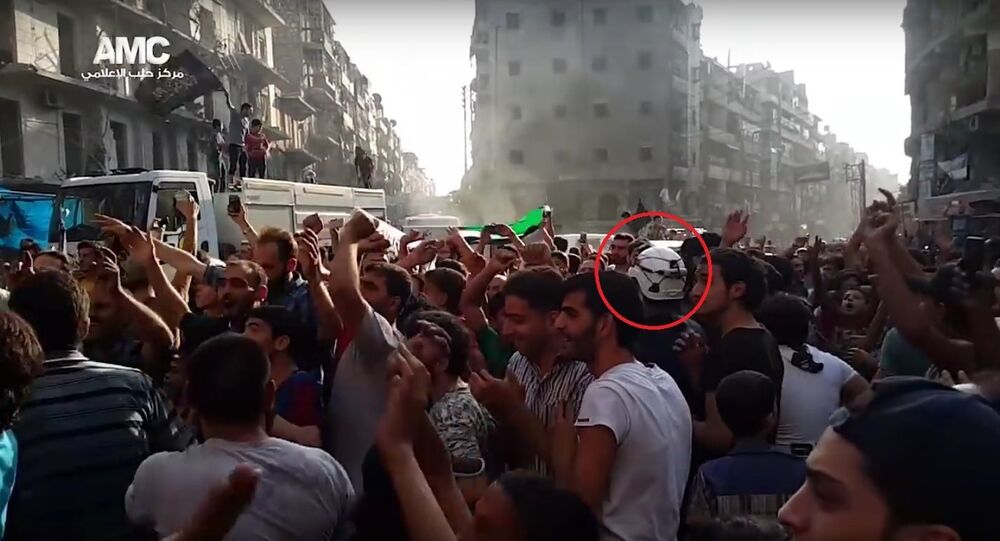 On Friday, Colombian President Juan Manuel Santos was awarded the Nobel Peace Prize. Speaking to Radio Sputnik, journalist Vanessa Beeley said that this was an excellent demonstration of truth spoken to power, and of the failure of the effort to award the Prize to the White Helmets, a "US deep state, UK intelligence operation inside Syria."

"I think today is an extraordinary day," Beeley said, commenting on the Nobel Committee's decision.

It's "a day when we've seen a true demonstration of truth to power – the force of public opinion, actually, [stopping] a process to give the Nobel Prize to what is fundamentally a…US deep state [and] UK intelligence operation inside Syria."

© AP Photo / Fernando Vergara, FILE
Honest Mistake or Insider Info? Norwegian TV Announces Nobel Peace Prize Winner Hours Before Official Ceremony
'Syria Civil Defense', otherwise known as the White Helmets, is known for their rescue work in militant-controlled areas in Syria. Said to have saved thousands of people, the group has been criticized for its alleged role as a Western-funded propaganda tool, and for direct links to Western intelligence and jihadist terrorist groups.

Beeley, a journalist-turned expert on the group, who actually visited Syria to thoroughly investigate its operations, began by pointing out that the organization's funding (conservatively estimated to be around $100 million) comes from NATO alliance countries, "which have a vested and declared interest in regime change in Syria."

Accordingly, in her view, this group "cannot be considered anything other than an extension of the propaganda and the actual proxy war inside Syria; they are an infiltration agent for the US coalition inside Syria."

Commenting on the group's shady links with British and US intelligence, as well as its members' dual role as 'rescuers by day and jihadists by night', the journalist stressed that she believes that "history will show that the White Helmets is one of the most insidious and destructive of the propaganda campaigns that has been running inside Syria."

Beeley further explained that the group "was created in 2013 by James Le Mesurier, fundamentally a British mercenary…This guy moves in the circles that are connected to the mercenary outfit known as Blackwater, now called Academi. Blackwater was paid by both President Bush and President Obama to work officially as a CIA assassination 'outreach' organization; in other words, they carried out the assassinations that the CIA did not want to get involved into distance these assassinations from the US government."

"That is extensively documented, and James Le Mesurier has very strong connections back to that quarter – back to organizations that set up these private security firms, specifically to carry out 'outreach' operations on behalf of their governments. And that is very much the role that he has played with the White Helmets."

What's more, Beeley noted, "if we look at the White Helmets themselves, they are embedded exclusively in al-Nusra and ISIS [Daesh] controlled areas; even if there are other associated brigades of terrorists in those areas, it's Nusra and ISIS that take control."

Another proof about neutrality of Syrian White Helmets with islamists https://t.co/RmLSTtsS0y

The journalist stressed that "we have specific video and photographic evidence of the White Helmets not only supporting these groups in their effort to overthrow the Syrian government…but we also see video evidence, for example, of them facilitating executions in northern Aleppo, or attacking Nusra prisoners in Idlib. There are extensive video footage and photographic evidence of them behaving certainly not in the way that you would expect from a first responder unit."

Having paid a visit to Syria's official civil defense organization (Syria Civil Defense) for herself to get to know conditions on the ground last month, Beeley suggested that she is convinced that the White Helmets are really an attempt "to eradicate the Syrian state and Syrian state institutions and to replace them with what is fundamentally a fabricated, intelligence shadow state." Unfortunately, she noted, "the White Helmets are doing this very effectively."

People in Western countries "only know about the White Helmets as being the Syrian civil defence; that's palpably untrue; they've taken the identity of the real Syrian Civil Defense and manipulated it via propaganda, the media, think tanks and NGOs so that they become in people's minds the solitary and exclusive first responder unit inside Syria – that is untrue."

Speaking to members of the country's official rescue services, Beeley recalled that she told that when militants overran cities such as Aleppo and Idlib, they "massacred crew members, stole equipment, and then from among these terrorists emerged the White Helmets." Accordingly, the journalist noted, "while we cannot say they are terrorists, I would say they're very strongly linked to terrorists; they act as a terrorist support group, and they have facilitated terrorist criminal acts within Syria."

© REUTERS / Abdalrhman Ismail
Western Hysterics as Its Criminal War in Syria Unravels
Ultimately, the journalist reiterated that she was very happy with today's Nobel Prize result, in spite of the widespread effort by the mainstream media and celebrity endorsements to grant the prize to the White Helmets.

"Today's result is extraordinary because it actually shows that even with all of this propulsion behind [the White Helmets] (celebrity, governmental, media promotion and public support), it's failed…This is an extraordinary result. I was almost not expecting it. What it's done now is give credibility to all those to those who were questioning what they were doing in Syria –who were questioning aspects of their operation. It's a huge positive. For me, it's proof of there still being the existence of truth to power," Beeley concluded.

Western Hysterics as Its Criminal War in Syria Unravels