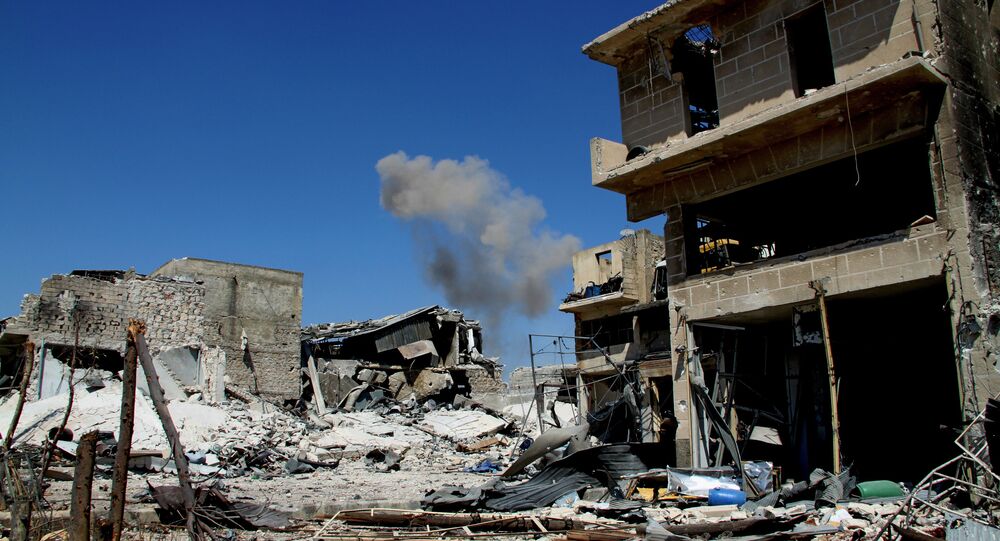 The United States has broken off talks with Russia on resolving the Syrian conflict, blaming Moscow for failing to fulfil its part of the ceasefire deal and for escalating violence in the war-torn Arab country, particularly Aleppo. Analyst Vladimir Fillipov suggested that the timing of Washington's decision is strange.

© AFP 2021 / GEORGE OURFALIAN
US Using Syrian Crisis to 'Wage a Surrogate War' Against Russia
If true, this, the analyst added, could explain earlier comments made by White House press secretary Josh Earnest, who said on Monday that Washington's "patience with Russia has run out." Thanks to the offensive launched by the Syrian Arab Army and its allies in the country's second largest city "these 'instructors in the closet' could be presented to the world," he suggested.

The United States suspended "its participation in bilateral channels with Russia that were established to sustain the cessation of hostilities" on Monday, US State Department spokesman John Kirby said in a statement.

Both Kirby and Earnest accused Moscow of failing to fulfil its part of the deal negotiated by Russian Foreign Secretary Sergei Lavrov and US Secretary of State John Kerry. The agreement was seen as a major step forward to a lasting peace in Syria, but it was derailed due to hundreds of ceasefire violations by US-backed rebels.

© Sputnik / Mikhail Alaeddin
Russian Embassy Shelling in Damascus is Consequence of Provoking Syrian War by US, Allies
"What we have seen from the Russians in the year or so since their military intervention in Syria is that they have not made much progress against [Daesh]. They claim that the reason they are in Syria is to fight extremists, but they haven't achieved a significant [counter-Daesh] objective in more than seven months," the White House press secretary suggested.

Earnest further assumed that Russian officials "have been reduced to try and to claim credit for successful US operations" in Syria.

Referencing the killing of Daesh's top commander Abu Muhammad al-Adnani, he said that "Russia was in a position where they were rather pathetically trying to claim credit for having carried out that operation. I think that's an indication that they don't have much to claim credit for when it comes to fighting extremists and fighting [Daesh]."

Russian Ambassador to the UN Vitaly Churkin described Earnest's assertions as "indelicacy, to put it mildly."

Russia has been hailed for its limited, but efficient military operation in Syria that has helped Damascus-led forces to turn the tide of the five-and-a-half-year war, recover key cities and boost the SAA's morale. Moscow has also been credited for its diplomatic efforts to launch an inclusive dialogue aimed at finding a suitable and lasting resolution to the conflict that has claimed more than 280,000 lives and displaced a half of Syria's population.

US Suspending Talks With Russia on Syria ‘Not Surprising’