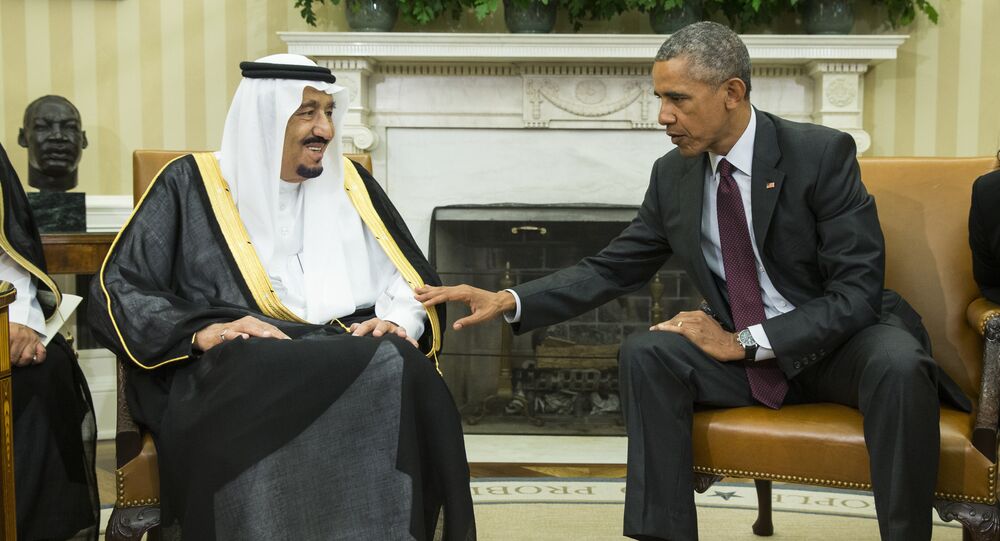 Congress Throws Obama Under Saudi Bus: How Riyadh Will Respond to the 9/11 Bill

This week, Congress overturned President Obama's veto of the Justice Against Sponsors of Terrorism Act, which allows families of 9/11 victims to sue the Saudi government for its alleged involvement in the attacks. Commenting on the decision, Russian analysts lay out the likely consequences the new law will have on US-Saudi relations.

The White House has already warned that the law would create a dangerous precedent, allowing other countries to sue the US for its actions abroad. Senate and House lawmakers have also admitted 'buyer's remorse' over their decision, just a day after Congress overrode Obama's veto.

Riyadh, meanwhile, issued a rather subdued statement on Thursday saying that "the erosion of sovereign immunity will have a negative impact on all nations," and adding that the Kingdom hopes Congress will work "to avoid the serious unintended consequences that may ensue."

The Saudi government's statement did not include specific threats of retaliation, or clarify what the 'consequences' would be, but analysts suggest that they may have something to do with the $750 billion in assets that Riyadh threatened could be withdrawn from the US in the event of the bill's passage.

© REUTERS / Andrew Kelly
9/11 and the Saudis - When Will the Hypocrisy End?
Speaking to the independent online newspaper Svobodnaya Pressa, US politics specialist Dmitri Trenin emphasized that consequences are inevitable; the Saudis won't just leave this alone.

"It wasn't for no reason that Obama sought to avoid [the passage of this law]," the expert explained. "But the Congressional override made his efforts impossible. The situation has become more dangerous for the United States."

Trenin said that unlike the White House, the US Congress does not always act based on considerations of the US's complicated relations with other countries.

"Its rationale emanates first and foremost from perceptions of voter sentiment. And many Americans feel exactly the way that the Congressmen voted; that is, if some Saudi official stood behind the terrorists who organized the September 11 attacks, they must answer for their actions, whatever the consequences might be for the US as a whole."

Accordingly, the analyst believes that the bill "will put the US in a more vulnerable position. Relations with Saudi Arabia, and the US position in the Middle East in general will become more complicated."

Trenin recalled that US-Saudi relations were tense even before the bill's passage. "The Saudis have been 'diversifying' their foreign policy for quite some time, because the US has stopped being the reliable partner and ally it was even six or seven years ago. And this is probably already irreversible."

"By the way, the decision on the possible withdrawal of assets from the US has also been considered for quite a long time. Therefore, I think Riyadh has already created some kind of program of action in this direction. Now, they will likely start to move away from the US more actively than they had before."

© REUTERS / Kevin Lamarque
Veto Reversal on 9/11 Lawsuits Act Marks Obama’s Biggest Political Defeat
Vladimir Isaev, a professor of international economic relations at the Institute of Asian and African Studies at Moscow State University, agreed with Trenin, suggesting that Riyadh will retaliate against US lawmakers by starting the withdrawal of their investments –but there's a catch. "The amounts we're talking about are not insignificant. However, they won't be able to bring down the US market."

According to Isaev, in the short term, US officials can soften the blow by forcibly preventing the Saudis from withdrawing large sums. "After all, there are no financial rules spelling out the procedures for such a withdrawal. This means the process will be stretched out, and will occur gradually, meaning the impact could be to shake the securities market a little, but nothing more. The fact is that others will happily buy the Saudis' holdings off them."

As for the likely destination of Saudi wealth, the most likely place is China, according to the analyst.

There is also another way for Riyadh to try to get its 'revenge', Isaev noted. The Saudis could do their best to destroy the US shale oil industry, including rejecting the recently announced agreement to limit oil production, by developing new fields, etc., with the end goal of "drowning out the American shale oil industry. Because when oil prices fall below $40, it becomes unprofitable to produce."

"However, such a strategy would hit not only America but Saudi Arabia itself, where the situation hasn't been so good lately. King Salman has even cut the salaries of his ministers by 20% recently." In other words, the analyst noted, playing with finances is "a double-edged sword."

© AP Photo / Marty Lederhandler
New 9/11 Law Passed After Senate Approved $1.15 Billion Arms Sale to Riyadh
Ultimately, Isaev believes that Riyadh's ability to shake the US financial system is limited, even though they could threaten to temporarily throw markets into confusion. "It would be enough to offer Saudi-held US securities on the world market for cheap. For example, if the paper is worth a hundred dollars, and they offer it for $85, someone would gladly buy it. The problem is that selling such a huge amount quickly is simply impossible."

As for political relations between the two countries, the analyst conceded that the decision could worsen relations somewhat. "But we shouldn't forget that Riyadh has an agreement on military cooperation with the US, and has pledged to buy over $40 billion-worth of weapons over the next few years. Given their involvement in the Middle East, via the bombing of Yemen, etc., we can be sure that these relations won't be easy to break. Riyadh can simply wait it out until the next administration – one that may be more accommodating," Isaev concluded.