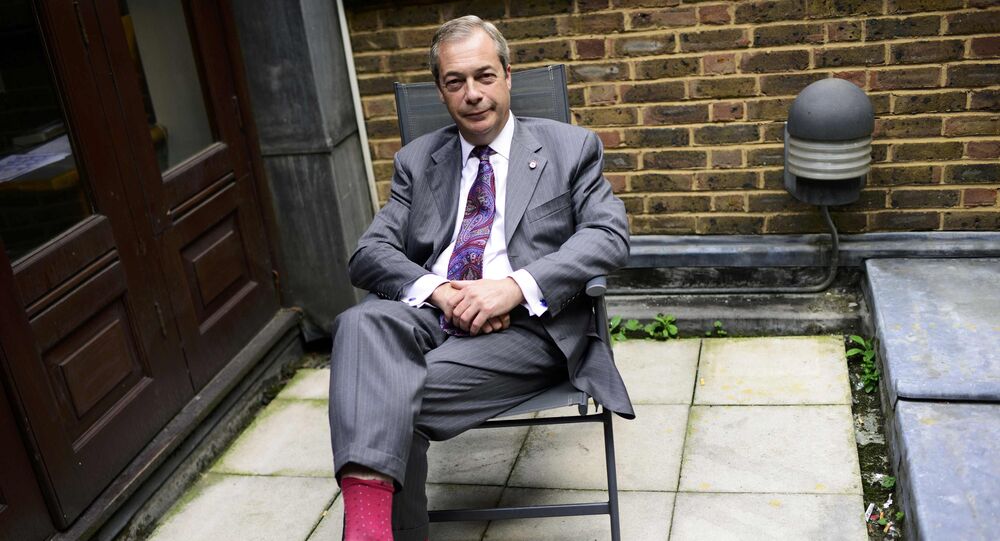 Former leader of UK Independence Party (UKIP) Nigel Farage stated that he is in the United Kingdom and he does not participate in coaching Republican Party nominee Donald Trump ahead of the next round of presidential debates.

MOSCOW (Sputnik) — Former leader of UK Independence Party (UKIP) Nigel Farage said Saturday that he was in the United Kingdom, refuting earlier media reports that he left for the United States to coach Republican Party nominee Donald Trump ahead of the next round of presidential debates.

"Contrary to press reports, I am in the United Kingdom," Farage wrote on his official Twitter account.

Contrary to press reports, I am in the United Kingdom.

​Earlier in the day, The Guardian got in touch with a UKIP spokesperson who also rejected media reports claiming that Farage had already left for the United States to help Trump in the wake of the first debates, which some allege, he lost.

© AP Photo / Gerald Herbert
'Mr. Brexit' Farage Stumps for Trump, But Have US Voters Ever Even Heard of Him?
On Thursday, a Public Polling Policy (PPP) survey revealed that after the first of the three planned debates, Democratic Party nominee Hillary Clinton had a solid lead over her Republican rival in five key US battleground states.

The US polling firm also noted that voters in all five states widely perceived Clinton to be the winner of the first presidential debate on Monday night.

The next Clinton-Trump debate is scheduled for October 9.

'Mr. Brexit' Farage Stumps for Trump, But Have US Voters Ever Even Heard of Him?