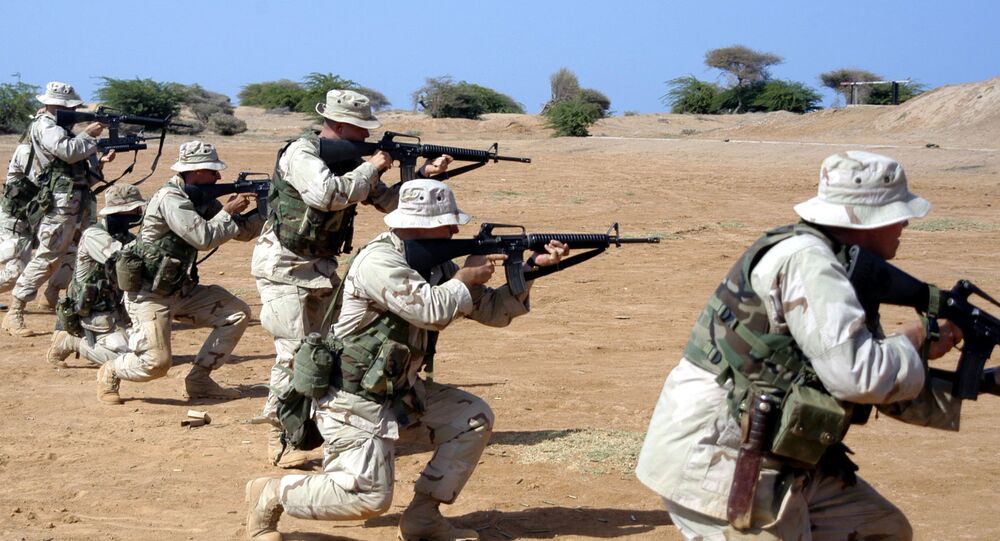 Despite Washington pouring millions of American taxpayers' dollars into the US military infrastructure and arms supplies to troubled African states, the continent is not getting any safer. So what are the real objectives of the US African Command in the region?

In his latest article for The Intercept a US award-winning journalist, Nick Turse, turned a spotlight on a paradoxical situation: although the US government has poured hundreds of millions of dollars in military aid to the Pan Sahel African countries since 2002, the region has become less secure.

"The region, relatively free of transnational terror threats in 2001, is now beset by regular attacks from Boko Haram, a once-tiny, nonviolent, Islamist sect from Nigeria that has since pledged allegiance to the Islamic State and threatens the stability of not only its homeland but also Cameroon, Chad, and Niger. And Boko Haram is just one of 17 militant groups now menacing the region," Turse points out.

© AP Photo / Jason Straziuso
Unspoken Story of US' Growing Military Presence in Africa
Citing declassified military documents obtained by The Intercept, the journalist underscores that between 2009 and 2013 alone the US allotted $288 million in the Trans-Sahara Counterterrorism Partnership (TSCTP) funding to help armed forces of Chad, Mali, Mauritania, and Niger.

US special operations forces provide regular training to Niger's army. Washington has spent millions of dollars on planes, trucks and "other gear" to the African nation, Turse points out, adding that this is just the tip of iceberg given the Pentagon's significant military presence on the continent.

In his 2015 article for TomDispatch.com, Turse disclosed that there are dozens of US military installations in Africa, besides Camp Lemonnier in Djibouti.

According to the American journalist, US military also have access to locations in Algeria, Botswana, Namibia, São Tomé and Príncipe, Sierra Leone, Tunisia, Zambia and other countries.

Citing Richard Reeve, the director of the Sustainable Security Programme at the Oxford Research Group, a London-based think tank, Turse noted that the Pentagon has maintained covert control over "about every country" in West and Central Africa.

Still the exact number of US military installations on the continent is shrouded in secrecy. Likewise the Pentagon's tasks and objectives in Africa remain murky.

However, there is a strange correlation between the growing number of US military installations in the region, the increased activity of regional Islamist groups and Africa's oil production sites.

© AFP 2021 / PIUS UTOMI EKPEI
Worker speaks to the control room at the new Port Harcourt refinery built in 1989 at the same site where the first refinery in Nigeria was built in 1965 in oil rich Port Harcourt, Rivers State, on September 16, 2015

Africa's Crude Has Strategic Importance for US

© AP Photo / Hasan Jamali
'US Taxpayers Can No Longer Support Riyadh's Security and Fight Its Wars'
In 2005 GIGA Institute of African Affairs published a book entitled "Resource Politics in Sub-Saharan Africa." One of the authors of the book, German academic Lutz Neumann, presented a list of top African crude producers and stressed the US' growing interest in the African crude.

Neumann also highlighted the importance of the Gulf of Guinea, emphasizing that "the hydrocarbon-rich Gulf of Guinea is the main location of oil reserves in SSA, thus bearing the greatest prospects."

"Considering bilateral oil-trade relations, one should particularly emphasize the fact that the US receives 16% of its total oil imports from Africa, with the share of West African oil equaling the share of Saudi Arabia… The National Intelligence Council (USA) predicts that 'West Africa will play an increasing role in global energy markets, providing 25% of North American oil imports in 2015.' This reveals the strategic importance of the SSA [Sub-Saharan Africa] oil sector for the USA," Neumann emphasized.

© Flickr / Kevin Harber
Pentagon Confirms Plans to Build Drone Base in Africa's Poorest Country
Indeed, West and Central African countries listed by Neumann's as Africa's top oil-producers have become the Pentagon's focus since 2002, let alone Libya which was invaded by NATO in 2011.

It is hardly a coincidence, according to Chris Mansur of Geopolitical Monitor.

"West African oil remains strategically important for US policy makers, especially since it provides an alternative to Persian Gulf oil," Mansur wrote in his 2012 article.

"In 2007, the US African Command (AFRICOM) was established… Many critics of AFRICOM, including energy security expert Michael T. Klare, believe there is a direct relationship between the existence of AFRICOM and America's interest in African oil."

The journalist explained that there is a parallel between the US' increased military presence in Africa and its military expansion into the Persian Gulf since the establishment of the Carter Doctrine. In accordance with the doctrine, Washington had to ensure security of oil supplies to the US.

There is also the Wolfowitz doctrine that stipulates that Washington should control resource-rich regions to prevent the emergence of a "geopolitical rival."

Remarkably, Roger Stern, an economic geographer at Princeton University, revealed in 2010 that the US had "wasted" almost $8 trillion between 1976 and 2007 on protection of the Gulf oil sites.

Likewise, Washington has been pouring American taxpayers' money into its military infrastructure in Africa since 2002.

On the other hand, experts call attention to increased activity of Islamist terrorist groups across Africa. Curiously enough, the groups' terror attacks have targeted oil-rich regions of the north, west and central parts of the continent.

Most notably, Boko Haram, al-Qaeda in Maghreb (AQIM) and al-Shabaab — the three Islamist terrorist organizations — pose a significant threat to the African nations.

However, the US military presence has not led to diminishing the Islamist threat. Quite the contrary, Islamic extremist groups have recently intensified their activities on the continent.

Dan Glazebrook, a freelance political writer emphasized in his 2015 op-ed for RT that Boko Haram had got a second wind after NATO's invasion of Libya, through obtaining large quantities of weapons and ammunition from Libyan stockpiles. He underscored that the Western invasion directly resulted in the upsurge of terrorist activity in the Sahel region and beyond.

The question than arises whether the terrorist threat serves as a justification for America's further military expansion in the region.