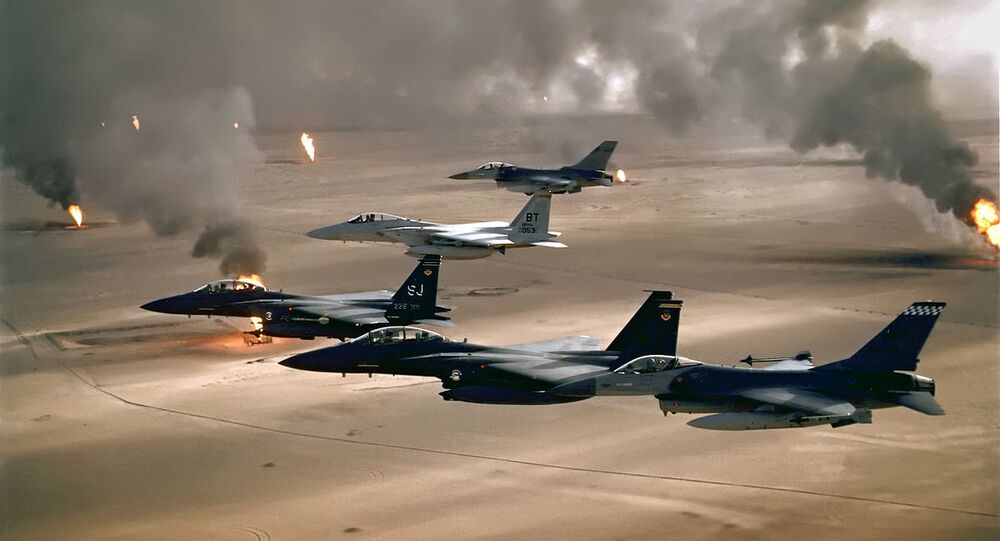 German Politician to Sputnik: 'US Pulling Us Into Abyss of War in Middle East'

How has the situation on the ground in Syria changed after a year of Russian military involvement? Speaking to Sputnik, veteran German politician Willy Wimmer suggested that it has demonstrated that Russia is the only major power ready to seriously fight terrorism, and to call for an end to a war which risks spreading across the region.

The US and its allies, meanwhile, have only managed to throw a wrench in the peace process, and have been unable to reach any of their own goals due to the Russian intervention, the politician argues.

Wimmer is a veteran member of the Christian Democratic Union with over thirty years of experience in the Bundestag. The politician has served as State Secretary of the German Defense Ministry, and as a vice president of the OSCE; he is a close friend of former Chancellor Helmut Kohl.

Interviewed by Sputnik Deutschland and asked to comment on the evolution of the Syrian crisis, Wimmer began by noting that virtually from the beginning, that conflict was a product of foreign meddling.

"What we are witnessing today is part of a longer development," the politician said. "The civil war which broke out five years ago resulted in a tragic struggle right at the moment when the Syrian-Israeli conflict over the Golan Heights seemed to have already been settled. All that was left to do was sign the agreement which could have resulted in peace in the Middle East. And if not for certain forces who were not interested in peace, this agreement would have been signed."

"We know that at the very beginning of the Syrian tragedy, British, French and US special forces became involved, giving this war, at the moment looking more like a civil conflict, a global significance," the politician emphasized.

© Photo : Russian Defence Ministry
With Limited Means and One Year Russia Achieved More in Syria Than US and Allies
Now, Wimmer suggested, the central question comes down to "whether we can put an end to this disaster and prevent the spread of the Syrian inferno to other countries, which would signify the start of a great war."

Accordingly, the politician emphasized that those in positions of power in Germany "must do everything possible to find a peaceful solution to this problem; this means that we cannot interfere in the situation in the region, with our weapons, our finances or our armed forces."

Asked to comment on the one-year anniversary of the Russian operation in Syria, which was marked on Friday, the veteran politician suggested that it would be logical to first contrast Russia's mission with that of the US and European countries from a legal point of view.

"The intervention by the Americans and Europeans in Syria is a clear violation of international law," Wimmer emphasized. "This is a military operation on the territory of another state, one that's not authorized by the UN or under international law." In fact, the politician suggested, "the Syrian tragedy occurred precisely due to these forces."

Accordingly, the politician said that he believes that "if there is a chance to stop the bloodshed in Syria, it exists only due to the Russian operation, which is being carried out in compliance with international law…"

As for the US, Wimmer suggested that that country has used military power almost exclusively for wars of aggression going back to 1999 and the war in Yugoslavia, when, in his view, NATO ceased to be a truly defensive alliance. In this situation, the politician believes that Russia's intervention on the side of the legitimate government in Syria is part of a larger attempt to return to an international order of peaceful coexistence and cooperation.

© Flickr / Kenny Holston
Teacher vs. US Base: 'If Germany is Really Independent, It Must Close Ramstein'
Unfortunately, the politician noted, Washington's current plans appear to be "to draw a new map in the space to the south of Western Europe and Russia. For this reason, we can see a high concentration of conflicts and wars between Afghanistan, Iraq, Syria and to the south of the Mediterranean Sea all the way to Mali. In all these areas the US is involved, waging wars and so making a significant 'contribution' to the mass impoverishment of populations, and the destruction of entire civilizations."

Russia, by contrast, "intervened in the Syrian conflict legally, in response to a request by the country's government and President Assad," Wimmer said. "That's the big difference between US and Russian actions: The US is responsible for death and terror near our borders, resulting in the massive migration flows we face, while Russia advocates for the resumption of negotiations, for a victory of reason and a return to peaceful coexistence."

The whole tragedy of the Syrian conflict, according to the politician, "is that the Syrian people are the ones that have to bear the heavy burden of the conflict on their shoulders. That's why there is no alternative to a peaceful settlement to the conflict."

Wimmer noted that today, "the US faces a presidential election at perhaps the most dangerous time the world may ever find itself. The forces which control the US seek to limit the freedom of action for the future government. This means that the threat of the war spreading beyond Syria is quite serious."

Nevertheless, Wimmer said that he remains an optimist, and hopes that reason will prevail in the end. "In spite of the complete lack of clarity about the future development of events, I still believe that it is possible for the parties to agree between themselves, because what's at stake here is much larger than what we can see in TV reports from Syria."

Crucially, the politician explained that the Obama administration does not even appear to be the main powerbroker in US foreign policy anymore; rather, "it is those forces counting on Hillary Clinton to win the presidency. This is a familiar pattern. I can only hope that the prospective scale of the conflict becomes so great that Washington will agree to negotiations. If not, we will be faced with a disaster which will spread beyond Syria."

© AP Photo / Manuel Balce Ceneta
Losing in Syria, Washington Resorts to Threatening Russian Cities With Terror Attacks
As to Germany and its role in disarming the dangers of a US-Russian conflict spilling out into a hot war, including in Europe, Wimmer suggested that unfortunately, the current government is no match for the independent-minded policies of Helmut Kohl and Gerhardt Schroeder.

"When Kohl and Schroeder were in power, we saw that they had sufficient strength and opportunities to defend German interests within the NATO framework. They refrained from participating in armed conflicts. Now, we see how our defense minister travels to Iraq and announces that additional German troops will be sent there soon. I regret to say that the government in Berlin is far worse at protecting German interests than the former government in Bonn," the politician concluded.