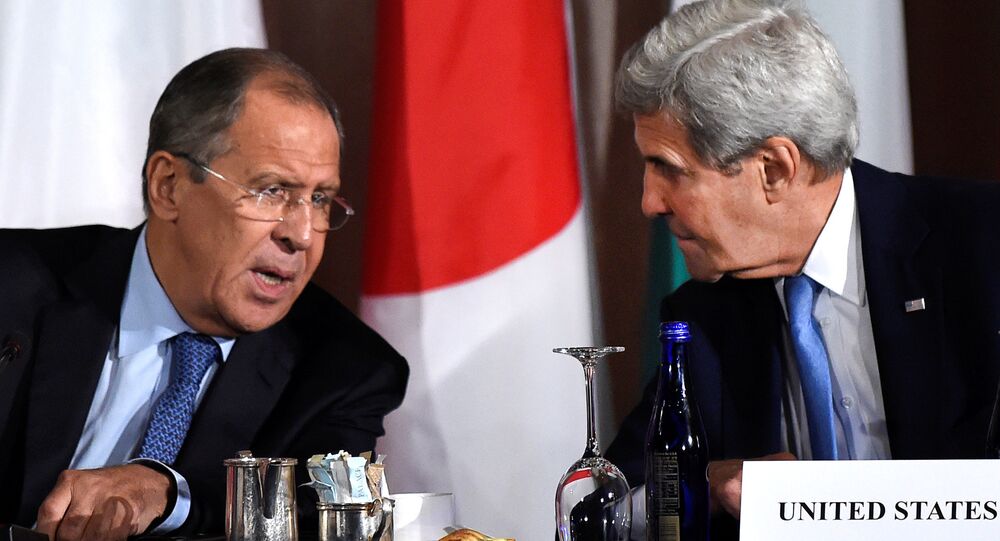 Washington 'Dealing Deadly Blows to Hopes of Peace in Syria'

Washington has launched an all-out diplomatic offensive against Russia, accusing it of violating ceasefire accords in Syria and demanding Moscow take "significant steps" to confirm its commitment to the deal. However, US political writer Diana Johnstone stresses that it is the White House who has dealt a deadly blow to the Syrian agreement.

© AP Photo / Senior Airman Matthew Bruch, US Air Force
The War of Nerves and Worlds: US Has 'No Will' to Join Russia in Syria
The Obama administration has dealt a heavy blow to hopes of peace in Syria, Diana Johnstone, a renowned American political writer noted in her opinion piece published by the Ron Paul Institute for Peace and Prosperity.

The US-Russian ceasefire agreement on Syria provoked a heated debate in Washington and in the Pentagon and prompted the US "party of war" to express skepticism regarding the prospects of the deal.

Indeed, on September 17, just two days before the first week of the ceasefire ended, the Syrian Arab Army (SAA) had been "accidentally" struck by the US Air Force near Deir ez-Zor. Over 60 Syrian soldiers were killed and over 100 injured.

Johnstone called attention to the fact that in early August former acting CIA director Michael Morell highlighted in an interview on the Charlie Rose show "that US policy in Syria should be to make Iran and Russia 'pay a price'." He specified that he meant "killing Russians and Iranians covertly."

"Then, on Saturday, September 17, the US Air Force did exactly what that CIA insider had called for," she remarked.

Although the US admitted that it struck the SAA positions, the Obama administration's officials didn't look confused, Johnstone noted, adding that United States Ambassador to the UN Samantha Power had gone even so far as to accuse Russia of "cynicism and hypocrisy."

"If the air strikes hadn't been enough to destroy Russian confidence in dealing with the United States, Samantha Power's contemptuous reaction was sure to do the trick," she underscored.

Without waiting for any evidence, the unanimous cry went up from Washington that 'the Russians did it!'" the political writer continued.

"If the humanitarian convoy was really attacked by the Russian Su-24 as it is claimed by the US, let the US provide the proof," he stressed.

Despite the obvious lack of evidence US Secretary John Kerry also pointed the finger of blame at Russia, claiming that the assault against the UN humanitarian convoy had sparked doubts about whether Moscow and Damascus were really committed to the ceasefire deal.

© AP Photo /
A Free Syrian Army fighter stands in front of a painting left by IS militants in Jarablus, Syria (File)

For his part, Leonid Ivashov, President of the Academy of Geopolitical Studies, a Moscow-based think tank, dubbed Washington's recent moves as "a decisive diplomatic offensive" against Russia in his Monday interview with Svobodnaya Pressa.

"The developments that have taken place over the past few weeks — the secret agreement with the US on the ceasefire [in Syria], the US air strike against Syrian government forces and the strike on the humanitarian convoy — could have been the elements of Washington's game against Russia, which served as 'an artillery preparation'. The UN Security Council's emergency session showed that after 'the preparation' the US has launched a decisive diplomatic offensive," Ivashov emphasized.

© AFP 2020 / TIMOTHY A. CLARY
US Threatens to Suspend Engagement With Russia in Syria Over Aleppo Situation
It seems that Ivashov's concerns have solid grounds. Following Kerry's address US State Department spokesperson John Kirby told a press briefing Wednesday that the Obama administration is "working through steps that [it] might have to take to begin to suspend [its] engagement with Russia on Syria."

"We're perfectly willing and able to move forward on those kinds of steps… unless we see some significant steps taken by Russia in the very near future to show that they mean what they say when they say they support a cessation of hostilities and a resumption of political talks," Kirby claimed.

Commenting on Kirby's last remark, Russian Deputy Foreign Minister Sergey Ryabkov noted Thursday that it reflects a state of "emotional breakdown" and added that Russia's proposal to launch a 48-hour humanitarian pause in the northern Syrian city of Aleppo is still on the table.

Meanwhile, at home, the Obama administration is pushing ahead with a propagandistic narrative aimed at oversimplifying the situation in Syria in the eyes of the US public, Johnstone emphasized. The White House continues to demonize the Assad regime and Russia ahead of the US' November election.

"An infantilized public will believe that 'geopolitics' and 'national sovereignty' are just big words that don't mean anything… It will never occur to an infantilized public that the war to destroy Syria has been planned for years — even though someone like General Wesley Clark revealed this years ago," the American political writer stressed.