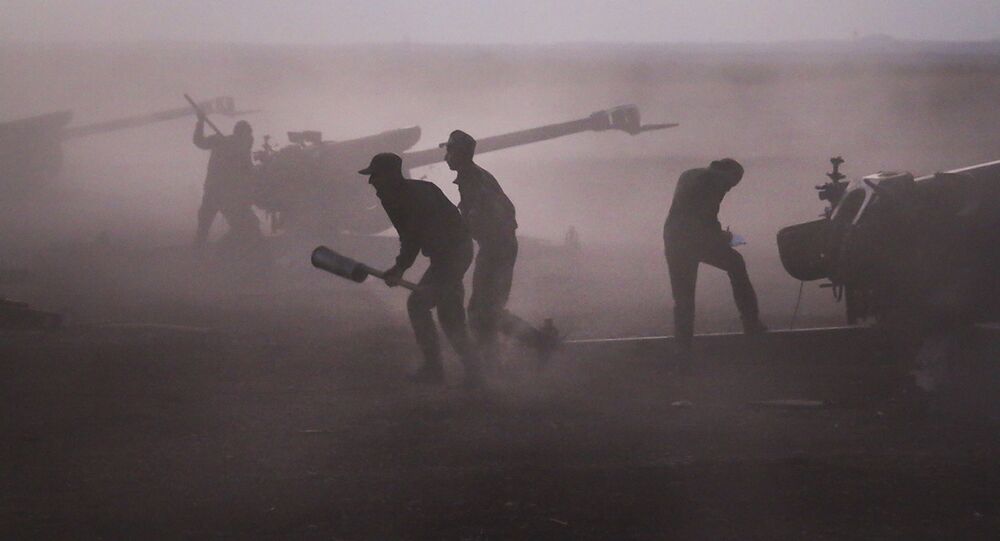 The Syrian ceasefire agreement brokered by the US and Russia has had certain flaws since the very outset, experts assume; according to Russian expert Stanislav Tarasov, the interference of a "third force" could have been behind the agreement's failure to take root.

According to Antoun Issa, a US-based Lebanese-Australian journalist, the Syrian ceasefire deal has been doomed to failure since the very outset.

"The collapse of the latest Syrian cease-fire is no surprise. Indeed, most observers had been pessimistic about the deal holding before it came into effect on September 12. Following the pattern of previous failed attempts to implement a cease-fire, the first week witnessed accusations and counter-accusations of violations from all sides, before eventually falling apart," Issa suggested in his article for The National Interest on Monday.

© Sputnik / Michael Alaeddin
Syrian Politician to Sputnik: 'WWIII Has Begun, and It's Being Fought in Syria'
The journalist argues that there are at least four reasons behind the collapse of Syria's ceasefire deal.

First, there is no enforcement mechanism to ensure that "belligerents" comply with the agreement.

"An effective cease-fire would include punitive measures against violators, and an effective enforcement mechanism in the form of joint international forces under a UN umbrella," he believes.

Second, the former al-Qaeda affiliate Jabhat Fatah al-Sham, also known as al-Nusra Front, and Daesh (ISIS/ISIL) have the capabilities to throw a wrench in the works. Since the ceasefire agreement is aimed at launching a joint US-Russian offensive against the terrorist groups in Syria, the al-Nusra Front "has every interest to derail any cease-fire deal that would ultimately target it."

To complicate matters further, Syrian rebels continue to coordinate with the al-Nusra Front on the ground. Given this, it is very hard to implement a sustainable truce.

© REUTERS / Kevin Lamarque
Washington 'Deliberately Sabotages' Russia-US Agreement on Syria
Third, there is "no political track to end the war," Issa noted. According to the journalist, although the US is insisting that "Assad must go," they have not yet proposed how to retain state institutions after Assad steps down, who would serve as a leader to put the country together again, and what shape the new transitional government would take.

Fourth, the Lebanese-Australian journalist claimed that the US and Russia are busy resolving their own geopolitical problems in Syria, leaving no space for the Syrian peace process to succeed.

© AP Photo / Senior Airman Matthew Bruch, US Air Force
The War of Nerves and Worlds: US Has 'No Will' to Join Russia in Syria
Commenting on the issue, Stanislav Tarasov, head of the Middle East Caucasus think-tank, suggested in an interview with Svobodnaya Pressa that the US-Russian ceasefire agreement had seemed "defective" since the very beginning. He repeated that Moscow had made a mistake by initially classifying the agreement.

At the same time, Tarasov reminded that Turkey and Iran are also involved in the Syrian conflict, along with Russia and the US.

"Without the participation of these two countries [Iran, Turkey] the format of the agreement has appeared to be invalid," he noted.

The Russian expert recalled that the Syrian ceasefire had been disrupted by the US' attack on the Syrian Arab Army's (SAA) positions near Deir ez-Zor with the assistance of British drones. However, the Western media sources continue to insist that it was the Monday assault against the UN humanitarian convoy that dealt a heavy blow to the US-Russia brokered agreement.

Interestingly enough, Washington admitted that it hit the SAA positions on Saturday, but called it an "accident."

According to Tarasov, the controversial situation could have been the result of a "third force" interfering in the Syrian peace process. He believes that the "third force" is the Pentagon, which stepped in to throw a wrench in the works of the US diplomatic corps.

"Despite the diplomatic battles [that continue to go on] in the UN Security Council, the US has not yet presented any credible evidence that the humanitarian convoy [near Aleppo] was attacked by Russian war planes and that the Syrian government forces were also involved in the assault," he emphasized, adding that in this light, the idea of a "third force" seems likely.

© AP Photo / Pablo Martinez Monsivais
US-Russian Deal: 'DoD Openly Saying It May or May Not Obey Obama'
Tarasov believes that the real reason behind inconsistent US policy in Syria is that Barack Obama's second term is ending. In this context, it is hard to strike a comprehensive and sustainable agreement with the "outgoing" administration.

In any event, Obama's successor, whether it's Hillary Clinton or Donald Trump, would have to reconsider Washington's Syrian policy, the Russian expert underscored.

Still, the foreign powers' primary goal remains to separate Syrian moderate rebels and radical jihadi groups on the ground, he stressed. As of yet, the views of Russia and the US regarding what Syrian groups should be designated as terrorists in the country have not coincided much.