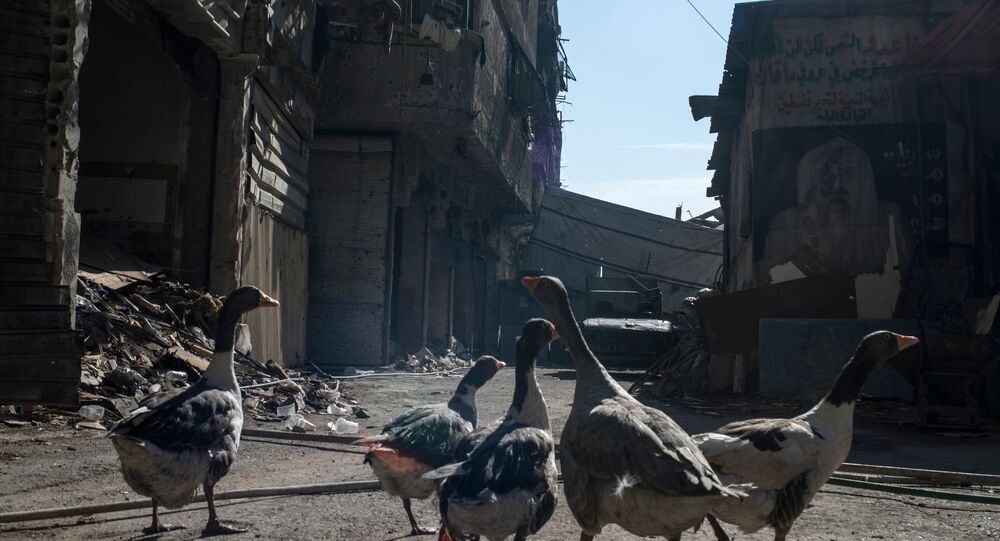 On situation in Syria

Situation in the country remains rense. Fightings between the Syrain armed forces and terrorists continue in the northern region of the country, especially in Aleppo.

According to the German media reports, terrorists confirm that they receive foreign support.

"We highlight once again the need to divide terrorists from the opposition," Maria Zakharova said during the press briefing.

Claims that Russian Air and Space forces conduct airstrikes on the hospitals in Syria are false. Most of the targets that were attacked by the Russian forces are the filed hospitals for terrorists.

On the statements made by Washington

© AP Photo / Dmitry Lovetsky
US Comments on Daesh Threat in Russia 'Emotional Breakdown'
"We received the statements voiced in Washington on Wednesday night and we hoped that these statements would be dennounced," Zakharova told journalists. "But unfortunately the US didn't do that."

US State Department spokesman John Kirby said at a press briefing Wednesday that the ongoing conflict in Syria could "no question" spill over into "attacks against Russian interests, perhaps even Russian cities, and Russia will continue to send troops home in body bags."

Moscow shocked with these cynical statements, Zakharova said. In fact, Washington blames Russia for recent tensions in the country.

Russia cannot regard US warnings of possible terrorist attacks on its soil or against its subjects as anything other than a call to action for radicals, Foreign Ministry spokeswoman Maria Zakharova said

"We cannot regard these statements as anything other than a call to action. This statement, as we understand, is addressed to these very radicals. We have no other choice in this regard since these statements have not been disavowed," Zakharova said at a weekly briefing.

Moscow, however, is calling on Washington to immediately notify Russia if it has any knowledge of terrorist attacks being planned in the country, Russian Foreign Ministry spokeswoman Maria Zakharova said.

"I would like to finish this very unpleasant part of today’s briefing with a call on Washington if it has any information on terrorist attacks that are being planned, on possible attacks on Russian cities that Mr Kirby was speaking of, on possible provocations, terrorist acts against Russian citizens to immediately tell Moscow all available information," Zakharova told a briefing.

Earlier, Washington said that Russia express lack of solidarity with the EU which suffered a lot from the terrorists attacks. After they the US threatens Russia with terrorists attacks in the country as a response to Russian operation in Syria, Zakharova said.

"Could you imagine that Russia would threaten the US with increasing of terrorism in the United States as a response to its foreign policy? I cannot imagine that," Zakharova told journalists.

US inconsistent statements on Syria show that Washington is "on the verge of hysteria," Russian Foreign Ministry spokeswoman Maria Zakharova said during the press briefing.

"The things we see and hear from the US Department of State and the White House and, especially, from the security agencies, are, of course, very inconsistent, showing that they are on the verge of hysteria on the Syrian issue. Apparently, this nervous reaction is linked to the wrong strategy employed by the US in the Middle East," Zakharova told journalists.

On Russia-US cooperation in Syria

© AP Photo / Hassan Ammar
Russia Ready to Continue Dialogue With US on Joint Activity in Syria - Russian MoD
Moscow does not intend to give up its cooperation with the United States on Syria, information exchange and contacts have not been blocked, Russian Foreign Ministry spokeswoman Maria Zakharova said at the press briefing.

"As far as the contacts are concerned, they will be renewed in Geneva, we never cut them off. We did not slam the door and say we would not cooperate. I cannot say that there are any sessions taking place, but at the same time, some information exchange, some contacts have not been blocked," the Russian Foreign Ministry spokeswoman told journalists.

On Libyan request for Russian weapons

"In the context of this publication, we would like to say that during Badri's visit to Moscow on September 24, but not on September 26, as Izvestia reported, the abovementioned issues were not on the agenda, as well as any requests to the Russian leadership had not been handed," Zakharova told the journalists.

She added that it was necessary to weigh the pros and cons before lifting the arms embargo imposed on Libya, taking into consideration the country's specific features.

The UN Security Council imposed arms embargo on Libya in February 2011, after the country became political unstable. It requires all UN member states to prevent the sale or supply of arms and related materiel of all types, including weapons and ammunition, military vehicles and equipment and spare parts, to the country.

On victims among civilians in Afghanistan

Russia is concerned by rising numbers of victims among civilians in Afghanistan due to the US airstrikes.

Earlier Afghani local media reported that a US drone strike in Achin district could have killed at least 13 civilians.

Moscow demanded investigation of the US airstrikes in Afghanistan, Zakharova told journalists.

Russia regrets that the investigation of the crash of the MH17 airliner in eastern Ukraine is of low quality and politicized, Foreign Ministry spokeswoman Maria Zakharova said Thursday.

"Russia regrets the low quality of the criminal investigation of the Malaysian Boeing crash on Ukrainian territory in 2014, its politicized nature, which have finally become evident to everyone after yesterday's statements. Absolutely groundless, unconfirmed allegations were made," Zakharova told journalists.

The Joint Investigation Team (JIT) tasked with probing the crash announced on Wednesday that the MH17 airliner  was downed by a Buk missile system which was brought from Russia and consequently returned there. Furthermore the investigation believes that the missile was launched by the territory controlled by the Donbas militias.

The Russian Defense Ministry cast doubt on the conclusions of the investigators, saying that no Russian missile systems, including Buk, have ever crossed the Russian-Ukrainian border.