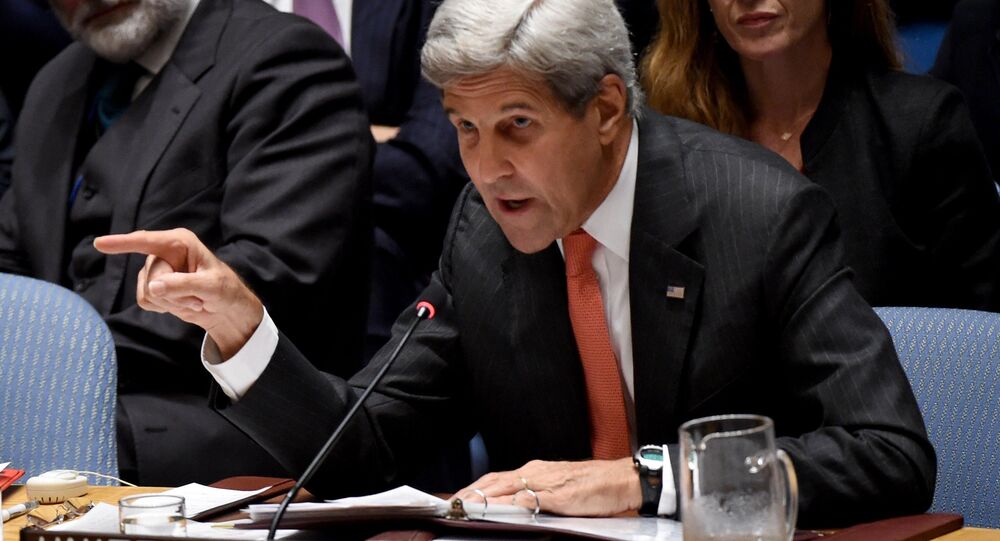 US Secretary of State John Kerry told Russian Foreign Minister Sergei Lavrov that the United States is prepared to suspend bilateral engagement with Russia in Syria unless Moscow takes immediate steps to end Syrian operations in the city of Aleppo and reinstate a ceasefire, Department of State spokesperson John Kirby said.

WASHINGTON (Sputnik) — According to Kirby, Kerry voiced "grave concern over the deteriorating situation in Syria" and said Washington considers Moscow responsible for the situation.

"[Kerry] informed the Foreign Minister that the United States is making preparations to suspend US-Russia bilateral engagement on Syria — including on the establishment of the Joint Implementation Center — unless Russia takes immediate steps to end the assault on Aleppo and restore the cessation of hostilities," the release stated.

Kerry also accused Russia of the use of incendiary and bunker-buster bombs in urban areas in Aleppo. He also blamed Moscow and Damascus for attacks on civilian infrastructure in Aleppo.

On Tuesday, Syrian government forces liberated most of the al-Farafira district northwest of Aleppo's historic Old City and advanced the frontline for the first time in years.

On Sunday, the UN Security Council held an extraordinary meeting to address the rise in violence in Syria's Aleppo. The meeting was initiated by the United States, France and the UK. During the meeting, Western diplomats harshly criticized Russia and Iran, claiming that Moscow and Tehran have supported the Syrian government in prolonging the war.

The September 9 cessation of hostilities agreement calls for the establishment of a Joint Implementation Center designed to help the US and Russian militaries coordinate airstrikes against terrorist positions in Syria.

© AFP 2021 / STAN HONDA
What to Expect After Russia-Bashing UNSC Emergency Meeting on Syria
On Tuesday, the Russian Foreign Ministry released the full text of the Russia-US deal on Syria brokered by Kerry and Lavrov earlier this month over Washington's failure to implement its part of the agreement.

Russia Pushes for Closer Cooperation With US on Syria Despite Differences