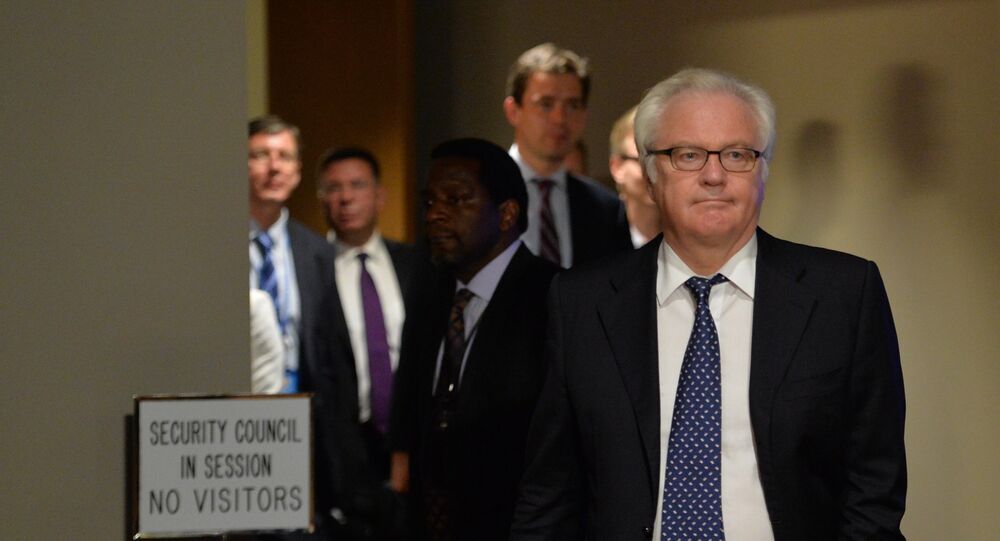 What to Expect After Russia-Bashing UNSC Emergency Meeting on Syria

After a UN Security Council emergency meeting on Sunday, differences between Russia and the West over Syria at worst may result in a new round of sanctions, this time over Syria, and currently no resolution on Syria is possible, political analyst Evgeniy Buzhinsky told RIA Novosti.

© AP Photo / Manish Swarup
Pentagon 'Had no Intention of Implementing' Main Part of Russia-US Deal on Syria
On Sunday, the UN Security Council held an emergency meeting to discuss the the situation in Aleppo, where Syrian government forces are carrying out an offensive against Jabhat Fatah al Sham, formerly known as the Nusra Front and the so-called armed opposition groups. The meeting was initiated by the United States, Britain and France.

During the meeting, Western diplomats criticized Russia and the Syrian government. In response, Russian Envoy to UN Vitaly Churkin said that the Russia-US agreement on Syria has not failed, but if Washington continues to change this will further complicates the situation.

"We outlined our position clearly. We need a serious process, without cheating, without people changing their stances every two days. The agreement was [achieved], and the only thing needed is its implementation instead of changing positions. If they continue doing this, it will be extremely difficult to have serious process," Churkin told journalists Sunday.

© REUTERS / Andrew Kelly
Syria's Return to Peace Became Almost Impossible Task - Russian Envoy to UN
"The UN Security Council cannot adopt a resolution because Russia would veto it. Moreover, a war between Russia and the West is also impossible. The only possible but absurd outcome is new sanctions, this time over Syria," Buzhinsky commented on the possible developments after the meeting.

The agreement between Russia and the United States on Syria is almost failed but neither Washington nor Russia wants to say it publicly because neither want to do so, political analyst Fedor Lukyanov said.

"The current situation in Syria is at a deadlock not because the agreement is not working or it’s working in a wrong way. The reason is that there is a typical balance of power on the ground for such conflicts. It’s obvious that there is no military solution but at the same time no one is ready for a political solution because each party is trying to change the situation on the ground for its own benefit," Lukyanov told the Russian online newspaper Vzglyad.

© AFP 2019 / KENA BETANCUR
UNSC Meeting on Syria is 'Another Information Attack by US Against Russia'
Another problem is a high level of mistrust between Moscow and Washington, which came long before the Syrian crisis.

"In addition, there is no unanimity on Syria in Washington. The State Department and President Barack Obama want progress on Syria but the Pentagon is trying to sabotage the agreement," the expert added.

It is impossible to resolve the Syrian crisis on terms unacceptable for Russia, political expert Evgeniy Satanovskiy said.

The assumption was shared by Buzhinsky. According to him, the West is still trying to persuade Russia to stop supporting Syrian President Bashar Assad. But only the Syrian people can decide the future of the president, he noted.