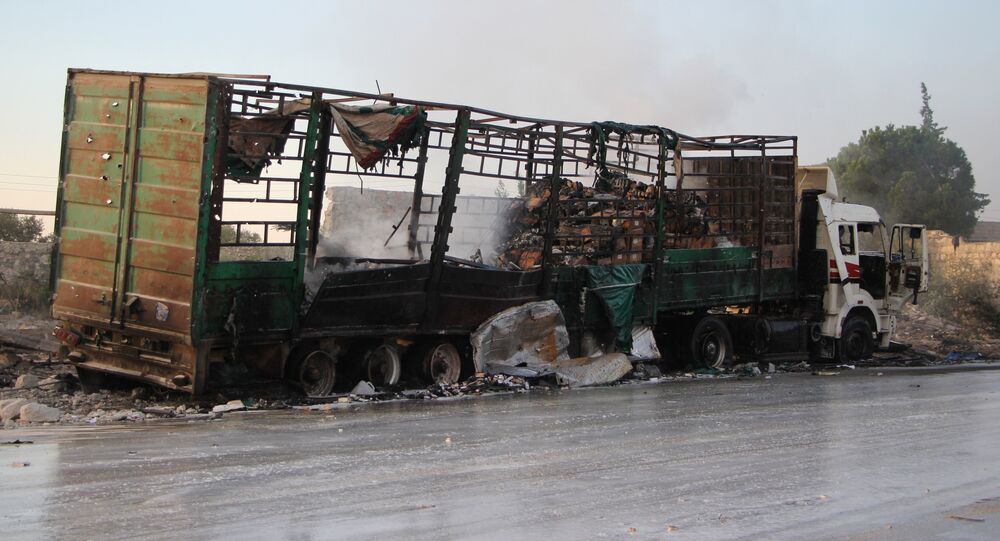 On Monday an attack on a UN/Syrian Arab Red Crescent (SARC) convoy was attacked in Syria. The convoy was carrying humanitarian aid to Aleppo Province. The attacks killed 20 civilians, an aid worker and destroyed 18 trucks.

© AFP 2021 / Omar haj kadour
Russian MoD Releases Footage of Attacked UN Aid Convoy in Syria's Aleppo (VIDEO)
Soon after the convoy was attacked, Washington accused the Russian military and the Syrian Army of the attack. Moscow denied any involvement of Russian or Syrian combat aircraft in the attack.

"We are stating with all responsibility that neither Russian nor Syrian aircraft carried out airstrikes against the UN humanitarian aid convoy in the south-western outskirts of Aleppo," the Russian Foreign Ministry said in a statement.

On Saturday, Russian Foreign Minister said that for objective probe in incident with attack on UN humanitarian convoy in Syria it is necessary to find and examine ammunition used to hit the convoy.

The fact that the United States was so quick to blame Russia for the attack proves that Washington wants to distract attention from the deadly attack on Syrian army positions in Deir ez-Zor by US-led coalition aircraft, Daniel McAdams, executive director at the Ron Paul Institute, said.

"The US doesn’t want to talk about the 62 Syrian soldiers that they killed a few days ago. And this very conveniently, perhaps coincidentally, completely changed the topic. […] It is a sort of an insinuation to plant the seed in everybody’s mind, whereas in fact we have absolutely no idea – at least at this point – who did it and why," McAdams told RT.

The expert underscored that there are no possible reasons why the Russian military or the Syrian Army could have conducted the attack.

According to retired US Air Force Lieutenant Colonel Karen Kwiatkowski, Russia is the first the State Department and the Pentagon blame for "just about everything."

"The position of blaming Russia will be a continuation of what we have seen in the past weeks,” she said. “It looks like the rhetoric war. It is very clear that the Obama administration knows what it is doing in the rhetoric war and yet they do not have any idea what they are doing on the ground in Syria," she told RT.

Commenting on the attack, the Russian Defense Ministry said that neither Russian forces nor the Syrian Army attacked the convoy.

© REUTERS / Ammar Abdullah
Washington's Stance on Syria Deal: If Something Goes Wrong, Blame Russia
"No airstrikes were carried out against a humanitarian aid convoy in a southwestern suburb of Aleppo by Russian or Syrian aviation. Seeing as the convoy’s route lay through the territories controlled by militants, the Russian reconciliation center monitored its passage yesterday via drones," Defense Ministry spokesman Maj. Gen. Igor Konashenkov said.

The ministry unveiled video footage of the attack. The video shows that the UN aid convoy was accompanied by a terrorists' off-road vehicle with a large-caliber mortar launcher, the spokesman said.

"The examination of the video footage made via drones of the movement of the humanitarian convoy in areas controlled by militants in the province of Aleppo has revealed new details. The video clearly shows how terrorists are redeploying a pickup with a large-caliber mortar on it using the convoy as a cover," Konashenkov said at a press briefing.

On Wednesday, the defense ministry said that an American Predator UAV was spotted in the area at the time the UN convoy was attacked.