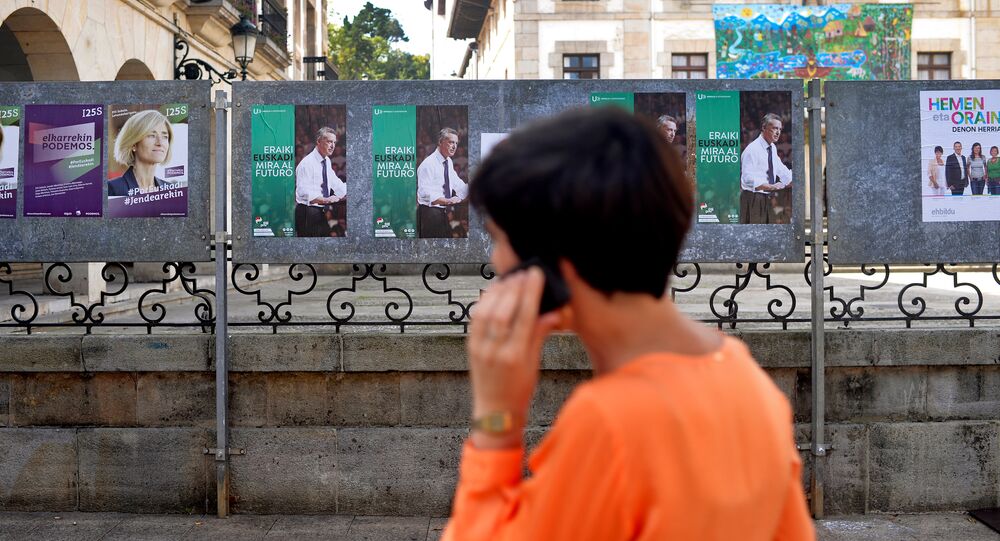 Spain's Galicia and Basque Country autonomous communities are holding regional parliamentary elections on Sunday while the country remains in a political stalemate and in the hands of a caretaker government.

MOSCOW (Sputnik) — The elections have been brought forward to September from the previous October date after Basque leader Inigo Urkullu said the regional vote must be moved away from a potential new general election amid a climate of instability in national politics. The general election may be called if Spain's leading parties fail to form a coalition government.

© Sputnik / Maria Sibiryakova
Catalonia Developing ID Cards For Residents in Event of Separation From Spain
The Galician parliamentary election will see voters choose representatives to the region's 75-seat parliament. Candidates include members of the conservative People's Party of Galicia and the Socialists' Party of Galicia, which are the regional affiliates of the People's Party (PP) and the Spanish Socialist Workers' Party (PSOE), Spain's two leading political rivals. Together, the two parties won over half of the regional parliament's seats in the previous 2012 election.

En Marea, which is linked to the left-wing Podemos party, as well as the Galician Nationalist Bloc and the Citizens party, are also competing. Most opinion polls, such as those conducted by Sondaxe, project the PP affiliate to gain over 40 percent of the votes, followed by En Marea with over 20 percent. Socialists are likely to drop to third place with less than 20 percent for the first time in over a decade, ousted by their far-left rivals. The nationalists are projected to take some five percent of the vote, while the Citizens are expected to receive the support of around four percent of the Galician population.

© REUTERS / Jon Nazca
Spain’s Socialists: General Election 'King Makers' With Only 20% Support
The Basque Country is also electing its regional parliament with nine parties competing for 75 seats. Regional nationalists are likely to retain their hold on the parliament, with the leading Basque Nationalist Party expected to maintain its support at around 35 percent, followed by the left-wing nationalist EH Bildu party, which is expected to get around 20 percent, according to polls.

Local PP and PSOE affiliates are looking to get around 10 percent each. PSOE is facing rivalry from the local Podemos affiliate in this region as well, losing almost half of its support compared to the 2012 election. Polls predict Elkarrekin Podemos to garner around 17 percent of the vote. Support for the remaining parties is in the three-percent zone.

© AFP 2021 / GERARD JULIEN
Suspect Says Rajoy Knew of Valencia's Corruption Schemes
The elections come as the Spanish parliament remains in a political deadlock between PP, PSOE and Podemos, which have been unable to form a coalition and acting Prime Minister Mariano Rajoy has failed in his bid for the prime ministerial post in early September's Congress of Deputies vote. Rajoy has accused the Socialists of undermining the formation of a coalition government.

In June, Rajoy's PP won the most seats in the parliamentary election, with PSOE finishing second. None of the political forces have an absolute majority and thus cannot form a government on their own.

Coalition talks resumed in the wake of the vote and Spain could face the third consecutive elections this year if they fail.