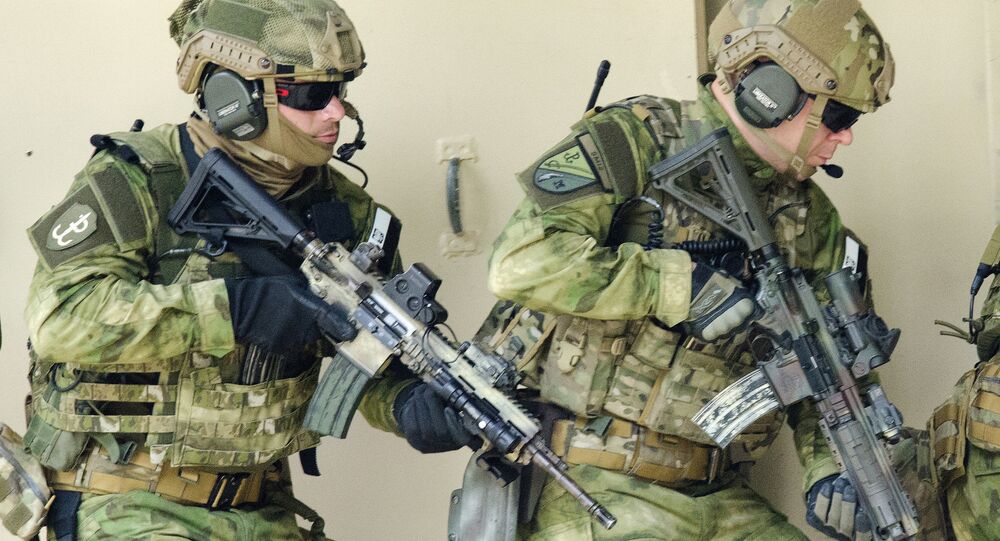 The recent alleged Polish troop deployment to Ukraine may be a fine example of how NATO keeps violating international law and fomenting instability across the globe, according to a Turkish political analyst.

© Sputnik / Igor Maslov
OSCE Observers Detect Georgian Mercenaries in Eastern Ukraine - Press Release
Last week, the Polish news weekly NIE reported that Warsaw had sent 18 special forces operators from a unit stationed near the town of Lublinetz to the beleaguered southeastern Ukrainian region of Donbass. Although Polish government officials have openly denied these claims, the media outlet declared that it can vouch for the veracity of the article in question, and has openly refused to publish a refutation.

Mustafa Turkesh, a foreign relations expert at Middle East Technical University, told Sputnik that this apparent violation of Polish legislation and international law is hardly anything new, and that the first ‘invasion’ of Ukraine was in fact a civil intervention by the Soros Foundation.

"Researching this issue leads one to believe that all of the color revolutions were started by civil initiatives, most of which were bankrolled by the Soros Foundation. Now, however, such operations are conducted by military units that conduct illegal activity directly controlled by the United States. If the information published by the Polish media outlet is true and Poland did send 18 special forces operators to Donbass, then it proves that the countries in the region are involved in the Ukrainian conflict," he said.

Turkesh pointed out that the ongoing conflict in Ukraine is a direct result of an aggressive strategy employed by the United States in order to gain a foothold in the Black Sea region.

"Russia is on the defensive here, while the US openly acts as an aggressor towards the region, using historical anti-Russian rhetoric prevalent in Eastern Europe. Countries like Lithuania, Latvia and Estonia thought that joining NATO would improve their ability to resist the ‘threat’ they think Russia poses. However, after a while they began to feel the burden they now have to bear as NATO members," he said.

He also noted that certain Eastern European countries are trying to fan the anti-Russian rhetoric in the EU and in the US, but at the same time live in fear of a war breaking out in the region – a risk which, ironically, is being exacerbated by their own actions.

At the same time, NATO’s policies in the region are unlikely bring any positive results, and instead threaten to trigger a large-scale conflict.

"Every one of the alliance’s intervention in the region creates new hotbeds of instability. Instead of resolving problems, NATO only creates more of them. If the information about Polish special forces deployment to Ukraine turns out to be true, it may instigate a new round of the Ukrainian crisis, effectively bringing it into a deadlock. This move will only increase tensions in an already volatile region," Turkesh declared.

He also remarked that the Warsaw’s decision to send military personnel to Ukraine may be related to the ongoing crisis in Syria, and that Poland’s attempt to play the role of a provocateur may have dire and unpredictable consequences for both the Ukrainian and Syrian conflicts.

"This Polish special forces’ deployment to Ukraine is merely a singular instance, part of a chain of events which reveal the dire situation the international legal system is currently in. The NATO invasion of Yugoslavia in 1999 still remains the most graphic example of this trend, as after the Kosovo operation, which was conducted in violation of all existing international rules, the system was never able to recover. As a result, all discussions about international law now seem pointless," Turkesh concluded.