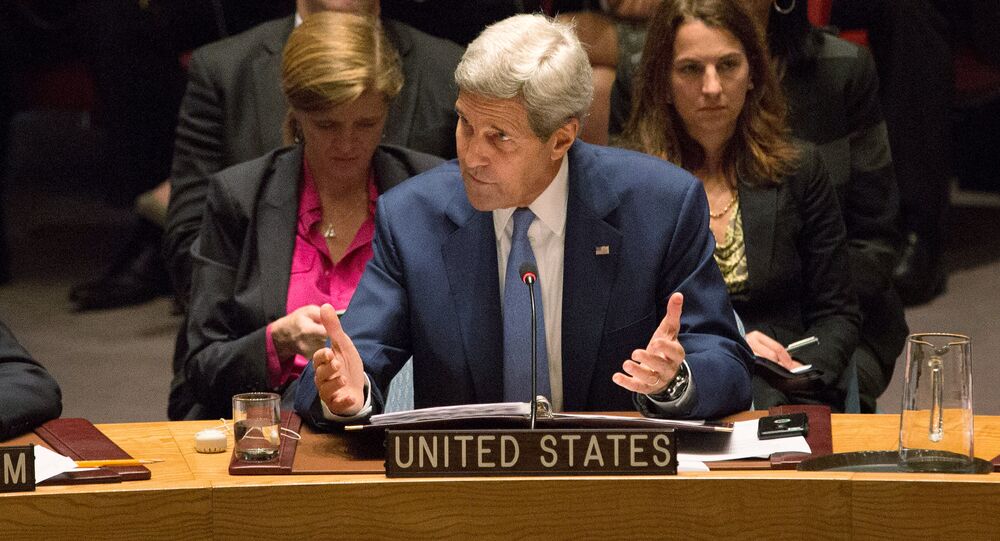 US Making Preparations for Possible Military Cooperation With Russia in Syria

'All preparations were being made' for US-Russia cooperation under the Syria ceasefire deal, John Kerry said during a UNSC meeting in New York.

WASHINGTON (Sputnik) — The United States has been preparing for military cooperation with Russia under the Syria ceasefire agreement, US Secretary of State John Kerry said at the UN Security Council meeting on Wednesday.

"Under President Obama’s orders, all preparations were being made in order to achieve that cooperation [with Russia] in terms of our military and intelligence community and the work we would do, so we are committed to that," Kerry stated.

© Sputnik / Mikhail Alayeddin
Syria Ceasefire 'Still Possible' in Spite of Recent Setbacks
The United States still believes there is a way forward to peacefully resolving the civil war in Syria, the US Secretary of State said.

"The United States continues to believe there is a way forward that, although rocky and difficult and uncertain, can provide the most viable path out of the carnage," Kerry stated. "Our shared task here is to find a way to use the tools of diplomacy to make that happen."

However, some Syrian opposition groups have relied on an alliance with the al-Qaeda linked terror group Nusra Front that changed its name to Jabhat Fatah al Sham (former al-Nusra Front), John Kerry said.

"For too long, some elements of the opposition have relied on an unholy alliance with al-Nusra [Nusra Front] and al-Nusra is al-Qaeda… and we can’t look the other way if groups are on the ground fighting alongside al-Nusra, an organization that overtly rejects a political solution to this crisis and is an enemy to all of us in this room,"

"The future of Syria is hanging by a thread," Kerry stated. "I urge this council not to give up, but instead support the steps outlined by the United States and Russia in Geneva."

© REUTERS / Kevin Lamarque
Russia Will Not Make Syria Deal Public as US Still Refuses to Do So - Kremlin
The international community should revive the Geneva negotiations to resolve the Syrian crisis, US Secretary of State John Kerry said.

"I call on the international community to support the UN efforts to begin a real negotiation in Geneva on a political transition that can provide only durable route to peace," Kerry stated.

The US secretary noted that the existing Geneva plan to settle the Syrian crisis is "far from perfect," but there is no alternative to it at present.

Members of the opposition in Syria should cooperate and abide by the ceasefire agreement brokered by the United States and Russia, US Secretary of State John Kerry said.

"I call on all members of the opposition to cooperate and revive this [Syria] plan," Kerry stated.

© Sputnik / Dmitriy Vinogradov
Sergei Lavrov Explains Why Syrian Air Forces Could Not Have Attacked UN Aid Convoy Near Aleppo
All aircraft should stop flying in "key" areas in Syria to restore credibility of the ceasefire agreement after the attack on a humanitarian convoy on Monday, US Secretary of State John Kerry said.

"To restore credibility to the process, we must move forward to try to immediately ground all aircraft flying in those key areas in order to deescalate the situation and give a chance for humanitarian assistance to flow unimpeded," Kerry stated.

The US state secretary also suggested that Syrian forces should be banned from flying over opposition-controlled areas.

The violations of the cessation of hostilities agreement in Syria underscore that parties to the deal cannot continue to do business as usual, US Secretary of State John Kerry said.

"We just can’t do business as usual," Kerry stated. "We can’t walk out of this room and continue to say we’ll have a ceasefire that everybody knows won’t work."