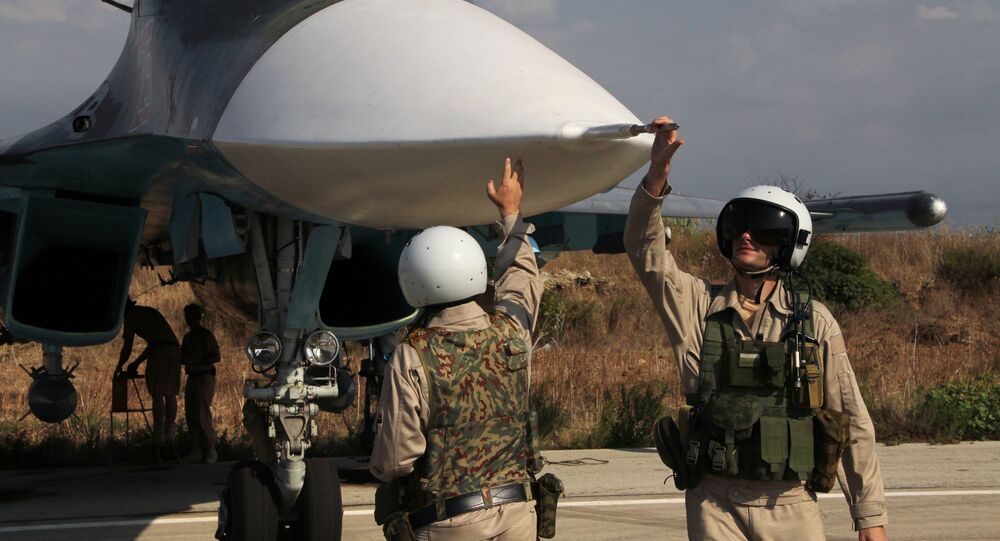 Russia's involvement in Syrian affairs has shifted the balance of power in the region and helped stabilize the situation. The Syrian ceasefire, brokered by the US and Russia, still holds. However, the so-called "moderate" rebels pose a challenge to the Russo-American deal.

Despite US President Obama having predicted last October that Russia's involvement in Syria would lead to a quagmire, Moscow's role in shaping the Syrian ceasefire indicates that Obama's gloomy forecast did not come true.

© Sputnik / Michael Alaeddin
Syrian Army Withdraws Heavy Military Equipment to Create Demilitarized Zone
The journalist points out that Moscow has accomplished most of its goals in the region.

Citing former US State Department official Steven Pifer, Dorell notes that Russia has not only "stabilized the Assad regime" in Syria but has become a "player" in the Middle Eastern affairs.

"Although three months ago terrorist groups managed to launch a counter-offensive in the southwest of the city [Aleppo] that led to heavy battles [between jihadists and the Syrian Arab Army], today such developments are technically impossible. The government forces are capable of resolving the Aleppo conflict and do not need specific assistance," Russian journalist and analyst Yevgeny Krutikov noted in one of his recent articles for Russian online media outlet Vzglyad.

© REUTERS / Ammar Abdullah
Extremist Groups Redeploy Units to Aleppo's Northwest Amid Ceasefire in Syria
Although some experts suggested that Russia has aligned itself with the so-called "Shia Axis," Moscow has established working relationships with major Sunni powers in the region, including Turkey and Saudi Arabia.

While Russia and Turkey are bolstering their economic ties after a period of chill in relations, Moscow and Riyadh are negotiating a crude output freeze agreement aimed at stabilizing oil markets.

The developments on the ground persuaded the Obama administration to take steps to team up with Moscow in the fight against Daesh. The Syrian ceasefire recently brokered by Moscow and Washington may pave the way for further US-Russian cooperation in Syria.

"If the calm lasts a week, Russian and US military experts will map the battlefield together. The so-called Joint Implementation Center will delineate where opposition forces are located, where it's mixed in with al-Nusra Front forces, and where al-Nusra [Front] and Islamic State [Daesh] forces are alone and can be hit by Russia, Syrian or US coalition airstrikes," Dorell writes citing US State Department spokesman John Kirby.

Despite certain difficulties the Syrian ceasefire appears to hold.

However, the so-called "moderate" rebels pose a challenge to the truce, according to the Russian Ministry of Defense.

"llegal armed formations have not started withdrawing hardware and armament from Castello Road simultaneously with the government troops; therefore they failed to observe their obligations in accordance to the Russian-American agreements. Detachments of the opposition are using the ceasefire regime in order to recover their combat capabilities and regroup their forces in the Aleppo, Hama, and Homs provinces. They increase the number of shellings," said the Ministry's statement published on its Facebook page Friday.

© AFP 2020 / GEORGE OURFALIAN
No Joint Implementation Center in Syria if Aid Access Not Granted By Monday
The Russian Center for Reconciliation informed the US about the "moderate opposition's" unwillingness to meet the requirements of the agreement and added that therefore "the government troops had to stop withdrawing forces and return them to the position, which they had kept before."

For its part US Department of State spokesperson John Kirby told a press briefing Friday that there will be no US-Russian Joint Implementation Center (JIC) in Syria if Washington does not see humanitarian access provided by Monday.

It is worth mentioning that humanitarian access is a condition of the Syrian ceasefire deal along with seven days of cessation of hostilities on the ground.

The opposition and the government forces should simultaneously withdraw from Castello Road, the main artery into Aleppo, to facilitate the delivery of aid.

However, the US-backed Syrian "moderate opposition" is throwing a wrench in the works preventing the delivery of humanitarian aid and threatening to upset the US-Russian deal.

"The United States didn't reply to any of our appeals containing information on ceasefire violations by US-controlled armed groups… This indicates that the United States does not control the situation in Syria and is not ready to take steps to force US-controlled militants to implement ceasefire," the chief of the Russian Reconciliation Center in Syria, Lt. Gen. Vladimir Savchenko warned Saturday.

Syrian Truce: A Moment of Truth in a Five-Year War