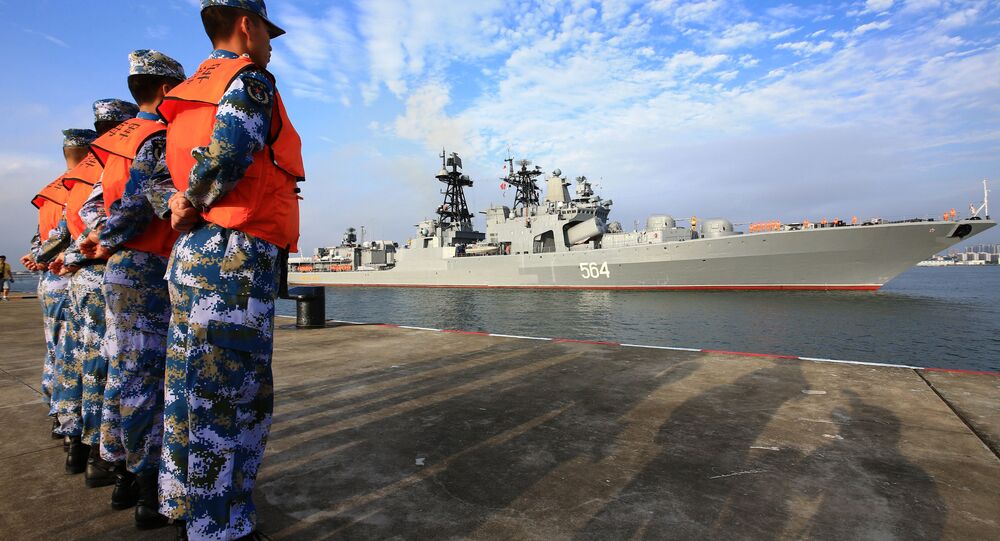 The past month has seen a marked increase in cooperation between Russia and China on defense and national security issues. And while it's early to speak of a military alliance between the two countries, experts say that as long as the dangers posed by terrorism and US-led unipolarity continue to grow, so too will Russian-Chinese cooperation.

© CC BY 2.0 / Bullion Vault / gold bar on coins
Gold Yuan: Post-Dollar World Order Emerging in Eurasia
Commenting on the exercises, PolitRussia contributor Sviatoslav Knyazev suggested that it's no wonder that much of the international community has focused its attention on the drills, "given that China's neighbors are being actively pitted against Beijing" using sea-based territorial disputes.

"The United States is providing demonstrative support for China's neighbors, actively trying to pull Southeast Asia into the its economic, political and military sphere of influence, using the 'divide and conquer' principle." Moreover, Knyazev noted, "the US military is treating the Chinese with open defiance on the open sea."

"Against this background," the analyst suggested, "the training of the Russian and Chinese military in the vicinity of the disputed territories is very revealing," serving to demonstrate the growing extent of military cooperation between the two countries. "Their message however, differs fundamentally from that of the US."

Speaking to Russian media ahead of the exercises, Vice Admiral Fedotenkov, commander of the Russian forces involved in the drills, emphasized that the Russian-Chinese cooperation "is not directed against anyone, and is intended to protect our mutual interests, to ensure security across the world's oceans. It's a good thing when two countries, two great powers, cooperate; this guarantees peace not only in the regions around our countries, but around the world."

In the course of the exercises, whose active phase began Thursday, Russian and Chinese sailors and marines are engaged in joint training on the defense of anchored ships, search and rescue operations, escort of civilian vessels, and the use of air defense systems. In addition, the military forces are holding rocket and artillery fire drills, and staging an operation to simulate the liberation of islands captured by the enemy, involving the use of paratroops and marines.

Meanwhile, simultaneously with the naval exercise in the South China Sea, military personnel from Russia and China, as well as Kazakhstan, Kyrgyzstan and Tajikistan have also kicked off Shanghai Cooperation Organization (SCO) joint anti-terror exercises dubbed 'Peace Mission 2016'. The drills involve about 40 aircraft, dozens of armored vehicles, and mountain warfare troops, and will proceed from September 15 through 21.

At the meetings, Russian and Chinese officials discussed the prospects for cooperation against organized crime, drug trafficking, illegal immigration and terrorism. "Separately, they also held a meeting on information security and the effort to combat color revolutions."

What all this adds up to, according to Knyazev, is preparation to defend against an even more hawkish US stance toward Russia, China and other Eurasian states, particularly in the case of victory of Hillary Clinton, or some other representative of the neoconservative or liberal interventionist wing of the US political establishment, in elections in November.

In such a scenario, the journalist noted, "we can expect increased pressure against us, and the revitalization of American expansionism in Europe, Southeast and Central Asia and the Middle East. For this purpose Washington will definitely make an attempt to pit Russia, China and Iran, the region's major continental powers, against their neighbors."

© East News / Xinhua/Imago Sport and News
Russian Experts Explain Why Chinese Air Power Will Soon Match Russian, US Capabilities
"For this reason, it is vital for Russia today to see integratory, unifying processes taking place across the Eurasian space. In China's territorial disputes with its neighbors, Russia is not taking anyone's side. Instead, Russia is striving to become a mediator."

Furthermore, Knyazev suggested that the entry of both India and Pakistan into the SCO "creates an excellent platform for negotiations between Beijing, New Delhi and Islamabad, where decades-long conflicts now have a hope of being resolved. Regarding Southeast Asia and the maritime dispute over the South China Sea, Russia has taken significant steps toward Chinese-Vietnamese reconciliation; both of these countries having excellent relations with Moscow."

Ultimately, the journalist noted, as US officials see the growing extent of military and security cooperation between Moscow and Beijing, hopefully, "it will help dramatically cool hot heads in Washington, and to suppress the tendency by some American politicians and generals for military adventures" around the globe. In the meantime, Russian-Chinese cooperation will continue to intensify.

Bridge Between Russia, China Across Amur River to be Built in 2018