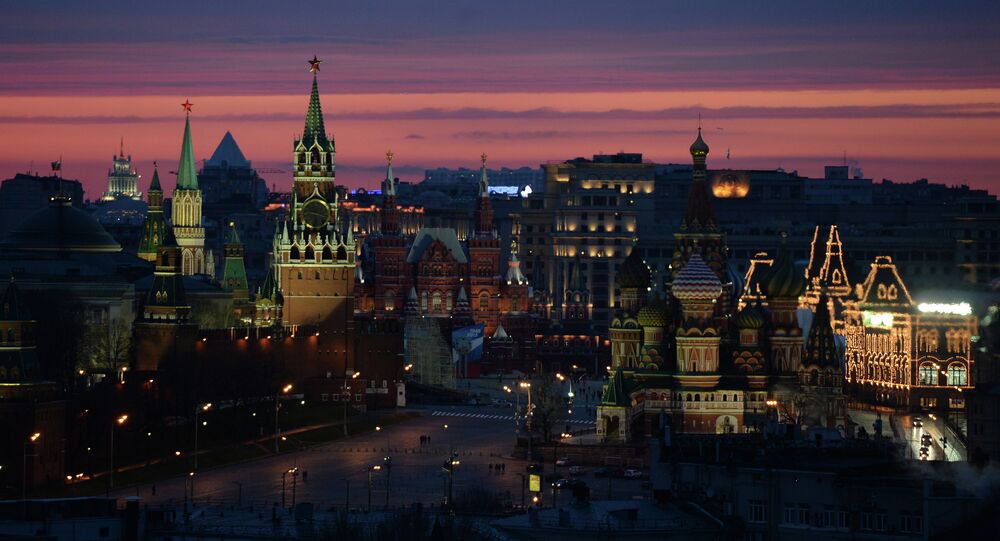 Next weekend, ADR will organize its second annual forum, the 'Dialogue of Nations. The Right of People to Self-Determination and Building a Multipolar World'. According to its organizers, the conference intends to "unite representatives of parties and movements advocating for self-determination and independence of their regions, and the fight against the ideology of world domination and economic exploitation."

© AFP 2021 / Fadi al-Halabi / AMC
Post-9/11 War on Terror ‘Was the Biggest Recruitment Tool for Terrorists’
The forum's organizers expect guests from Catalonia, Northern Ireland, Western Sahara, Scotland and even the United States –from states and territories including Hawaii, Puerto Rico, California and Texas.

Formed in 2012, the ADR was created as an organization which 'supports countries and peoples opposed to the dictates of the unipolar world and seeks to propose an alternative agenda'. Syrian President Bashar Assad is said to be among its honorary members.

Andrei Manoilo, a political science professor at Moscow State University, told the online newspaper that today the issue of self-determination, both at the national and regional level, has become extremely relevant. According to the expert, the UK's vote to leave the EU is probably the best recent example of anti-globalist feelings actually cemented by an election victory. At the same time, he added, the UK itself is also threatened by centrifugal forces, with Scotland's independence remaining an open question.

"We can see a pan-European trend – regions which consider themselves self-sufficient, such as Catalonia, are talking more and more insistently about independence. At the same time, the right to self-determination is prescribed in a number of international legal instruments, including the Vienna Convention on Human Rights."

On the other hand, the expert added that there are presently no legal mechanisms which are recognized worldwide allowing for the principle of self-determination to be acted on, without the intervention of an outside power, anyway. "This explains why Catalans, who have repeatedly spoken about their right to independence, have faced opposition from Spanish authorities. Although the Spanish constitution allows for exit from the country, a prescribed mechanism for actually doing so does not exist."

© AFP 2021 / Ronny Hartmann
Defying Public Opinion, Merkel Vows to Fight for EU-US Trade Deal
In the meantime, Manoilo noted, following the can of legal worms which was opened by Kosovo's declaration of independence from Serbia, several more "unrecognized or partially recognized states have emerged in the world. Their fate has depended on the influence of external forces, as well as the success or failure of state construction in these territories."

The expert suggested that Russia, which borders the unrecognized Donetsk and Lugansk People's Republics, as well as the partially recognized Abkhazia and South Ossetia republics, "it's important and interesting to see global trajectories on the full-fledged independence of states." And "it's not a matter of looking to prick and prod someone, or support the movement for the secession of Texas," Manoilo emphasized. "Here what's important is to draw parallels between the processes of decentralization in the West and the former Soviet Union."

National self-determination aside, anti-globalist forces have also stepped out in favor of ending US geopolitical hegemony, Western economic-financial hegemony, or the power of supranational institutions such as the EU. Asked whether the ADR conference could be seen as another indication that the world is moving toward multipolarity, Manoilo explained that the prerequisites are there, but it will take time for them to be realized.

"I would put it this way: we are living in a decaying unipolar, America-centric world. Individual structures from this world still exist, but their influence is growing weaker. However, no one has yet proven that a multipolar world will necessarily take the unipolar model's place. For now, mutipolarity is a hypothesis, one not confirmed in practice. There is also the model of a 'nonpolar world'. In the world today two trends have intersected – globalization and regionalization; the two function as a kind of pendulum. This is the objective process in the development of the modern world system."

© AP Photo / Ivan Sekretarev
Putin Blasts Western 'Democratization' Saying It Causes Terrorism, Failed States
In any case, the professor suggested that the role of the anti-globalists is positive in many ways, "in the sense that they attempt to restrict the expansion of transnational corporations." The only caveat, according to Manoilo, is that in many Western anti-globalist organizations "are actually sponsored by these same transnational companies that they ostensibly oppose. All sorts of flash-mobs by anti-globalists help to remove the acute discontent of the activities of these companies – to let off steam. After engaging in some roughhousing, everyone disperses, with no real results."

Pavel Salin, the director of the Center for Political Studies at Moscow's Financial University, suggested that the "first signs of the breakdown of the unipolar world order could be seen even five years ago." If before, "the global project for the world was being created with 'an American face', today the construction of a globalized society continues, but is latently searching for new principles."

"As for the conference," Salin suggested that "it may end up having a very practical purpose," helping, for one, to "find vulnerabilities in the US political system, something the Soviet Union found impossible to do" in  its own time. At the same time, Salin admitted that explicit proponents of separatism in the US are a marginal force, "their impact on society extremely small. Accordingly, I'm not sure that it's worse placing one's bets on them."

The anti-globalist movement more broadly, on the other hand, is another story. Russia, as part of the BRICS group of country, and through its support for sovereignty and self-determination in the Syrian conflict, has demonstrated quite decisively its interest in building a multipolar world. For anti-globalist forces, the main task is now to create an ideology – one which stretches across national, ethnic, religious and political lines. That appears to be one of the issues the Anti-Globalization Movement's Moscow conference intends to make progress on later this month.