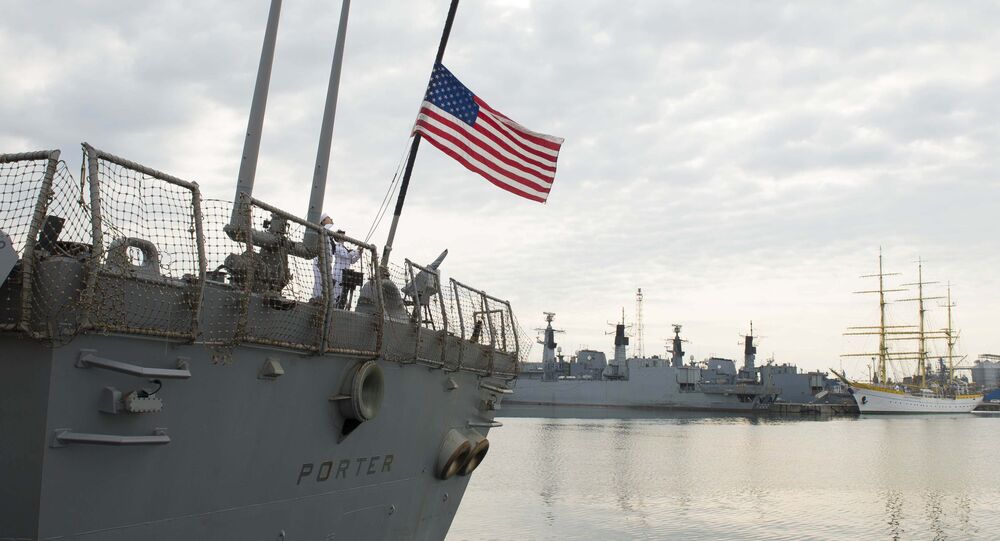 Washington Criticizes Moscow for Doing What US Has Done for Decades

The Pentagon lambasted Russia for the September 7 incident in the Black Sea that saw a Su-27 jet intercept a US spy plane, saying that these actions could "unnecessarily escalate tensions." Yet Washington remains ignorant of its own military activities that other countries consider threatening, analyst Ted Galen Carpenter asserted.

The senior fellow in defense and foreign policy studies at the Cato Institute referred to this as a common theme. The United States assumes that what it "does militarily in the international arena is not only acceptable, but should be beyond challenge or criticism," he said. More worryingly, these operations often take place thousands of miles beyond the US borders.

This has been a pattern for decades.

"According to that reasoning, Washington and its compliant allies had every right to enforce a no-fly zone to influence the outcome of the internecine conflict in Bosnia in the 1990s. Likewise, the United States had every right to impose similar restrictions in Iraq. When Serbian leaders and Iraqi dictator Saddam Hussein resisted such measures, they were the ones escalating the crises," the analyst observed.

Washington's response to Russia's limited but successful military engagement in Syria is a more recent example. Policymakers, military officials and mainstream media in the United States have tried to paint the campaign as dangerous, if not illegal, despite the fact that Damascus asked Moscow for military assistance in its counterterrorism efforts at a time when the Syrian Arab Army was struggling to contain a foreign insurgency.

For comparison: neither President Bashar al-Assad nor his government has ever given the green light for the US to carry out airstrikes in or send special forces to Syria. "And yet America's intervention from six thousand miles away is widely viewed as not only proper but inescapable, for both strategic and moral reasons," Ted Galen Carpenter observed.

"A similar double standard is evident regarding deployments involving US and Russian warships in both the Baltic Sea and the Black Sea. There are frequent US complaints that Russian ships or aircraft have harassed American vessels. There is never any apparent awareness that Moscow might legitimately consider having US military operations in waters so close to Russia as a security threat," he added.

© Sputnik / Ministry of defence of the Russian Federation
US Sending Spy Planes to 'Snoop on Crimea's Defenses and Black Sea Drills'
This is the point that Russian officials, politicians and experts have repeatedly made, particularly when it comes to NATO's increasing assertiveness on the bloc's eastern flank. Moscow has been worried about enhanced war-gaming, increased military spending and rotational deployments on its doorstep let alone belligerent rhetoric. Yet Washington has been largely deaf to these concerns.

Ted Galen Carpenter suggested that policymakers in Washington imagine a foreign power carrying out several freedom of navigation operations in the US territorial waters. It is highly unlikely that the US would downplay something like this. "Likewise, it is difficult to contemplate Americans remaining indifferent to the sight of Russian destroyers and cruisers in the waters off Cape Cod," he noted.

In the analyst's opinion, US officials and media "need to become far more aware" of how the Pentagon's activities are perceived abroad.

"The smug assumption that 'we're the good guys, so nothing we do is wrong or provocative' is both myopic and dangerous. From the perspective of other countries, 'reasonable' US actions may seem profoundly threatening. And despite the risks, some of those countries no longer seem inclined to simply cower before Washington's might," he concluded.

This is Who Benefits From Russia-US Agreement on Syria