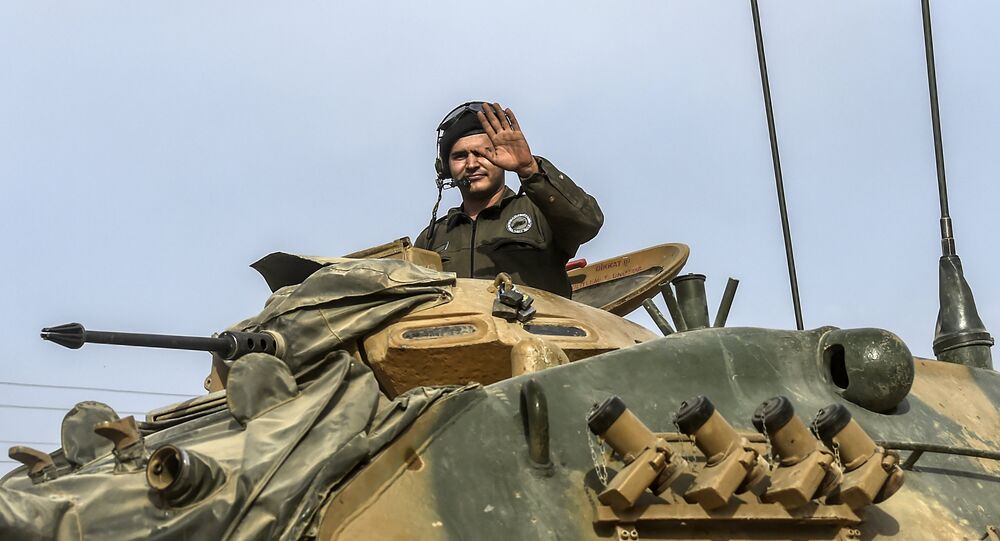 Recep Erdogan's announcement about the possibility of a US-Turkish operation against Raqqa, Daesh's stronghold in Syria, has provoked a lively debate among experts regarding the potential consequences of the joint military assault.

Turkish President Recep Erdogan's statement that Ankara is ready to join the US-led assault on Raqqa, the Daesh (ISIS/ISIL) stronghold in Syria, has triggered a heated debate among experts.

"Raqqa is an important center for Daesh. Obama particularly wants to do something together [with us] about Raqqa. We have told him that this is not a problem for us," Erdogan said, as quoted by Hurriyet Daily News.

© AFP 2020 / ADEM ALTAN
Turkey Sees 'No Problem' in Joining US in Liberation of Raqqa, Syria
Suraj Sharma of the Middle East Eye notes that the announcement has come as a surprise: previously, Washington signaled that it would provide air cover for Turkey to liberate Jarablus and refused to support the Turks if they continue to move southwards.

Speaking to Russian online newspaper Vzglyad Yaakov Kedmi, the former head of covert Israeli organization "Nativ" suggested that the Turkish Armed Forces are capable of expelling Daesh from its foothold in Syria.

"I am not quite sure whether the Turks will need the support of the American Special Ops on the ground, but I cannot exclude that, if necessary, such assistance could be provided [to the Turks]," Kedmi told the media outlet.

"Turkey has one of the most powerful armies in the Middle East. Theoretically, two mechanized brigade groups would be enough to retake Raqqa [from Daesh]," the Israeli expert stressed.

© REUTERS / Revolutionary Forces of Syria Media Office
Turkey Vows to Fight Creation of a Kurdish ‘Artificial State’ in Northern Syria
According to Kedmi, the fall of Raqqa will accelerate the collapse of the whole "Islamic State" (Daesh) in the region. However, after defeating Daesh in Syria, major powers involved in the conflict would have to focus on other extremist organizations in the region.

Kedmi recalled that up until recently American generals have been mulling plans to send the Kurdish People's Protection Units (YPG) to fight against terrorists in Raqqa.

However, the Kurdish militants do not fight beyond borders of the Kurdish enclaves, the Israeli experts explained, calling attention to the fact that there are no Kurdish settlements near Raqqa.

Now that the Turkish military forces have intervened in Syria, the participation of the YPG in the assault against the Syrian "capital" of Daesh is unrealistic, he stressed.

For his part, Alexander Ignatenko, head of the Russian Institute of Religion and Politics, expressed doubts regarding the possibility of Erdogan's "triumphant march" to Raqqa. Furthermore, the Russian academic underscored that the US has not yet officially announced the beginning of the operation.

"The United States has not yet signaled its readiness [to conduct] a ground operation, while Turkey will hardly be able to liberate Raqqa on its own," Ignatenko told Vzglyad, adding that talk is cheap.

© AP Photo / Christophe Ena
'Plan B': Washington Still 'Seeking to Divide Syria Into Separate Enclaves'
He emphasized that Raqqa remains Daesh's stronghold and it is unlikely that Ankara would retake it as easily as it recaptured Jarablus.

According to the academic, it would be no walk in the park for the Turkish army, which runs the risk of getting bogged down in the region. He recalled that Pentagon officials earlier admitted that it could take years to liberate Raqqa and Mosul.

Ignatenko believes that the Kurds remain the main target of Ankara in Syria. What Erdogan really wants is to prevent the creation of an independent Kurdish entity in northern Syria — on Turkey's doorstep, he remarked.

Yevgeny Satanovsky, head of the Moscow-based Middle East Institute, does not rule out the possibility that the US will soon officially announce an agreement with the Turkish leadership to storm Raqqa.

According to Satanovsky, neither the Kurds nor the US-backed Arab groups are capable fighters, able to defeat Daesh in Raqqa. So far, the Pentagon was forced to deploy 500 Special Ops in the region to seek the approval to dispatch an additional 3,000 troops in Syria.

"They can amass 3,500 US troops near Raqqa at any moment. It is a considerable force… [However] they desperately need some ground force that would become a "military fist" to strike Daesh with," the expert told Vzglyad.

Satanovsky suggested that at the same time Erdogan wants to drive a wedge between the Kurds and Washington.

There are no doubts that the Americans would finally betray the Kurds, the expert assumed. However, Washington is likely to continue to send weapons to the YPG, which will remain a headache for Erdogan.

Speaking to Middle East Eye, the professor said that Erdogan wants to send a message to Washington that the US no longer needs the Kurds to fight against Daesh in Syria.

"Ankara in no way can accept a PKK-PYD led entity in the region. Now it can send a message to the Americans that they don't need to rely on them when the Turkish military, a NATO ally, is ready," Bagci noted.

Boris Dolgov of the Institute of Oriental Studies, the Russian Academy of Science, insists that the US-Turkish military assault against Raqqa could mean the realization of the "American scenario" in Syria.

"Both Raqqa and northern Syria — are the territories of the [Syrian] sovereign state, and if the [US] plan is accomplished and Raqqa is brought under Turkey's control — as well as that of the Free Syrian Army (FSA) [backed by Ankara] — it would mean that this part of the country would be controlled by the FSA," Dolgov told Vzglyad.

The Russian academic underscored that the Raqqa assault cannot be kicked off without the consultations with Iran and Russia that is currently controlling part of the Syrian airspace.