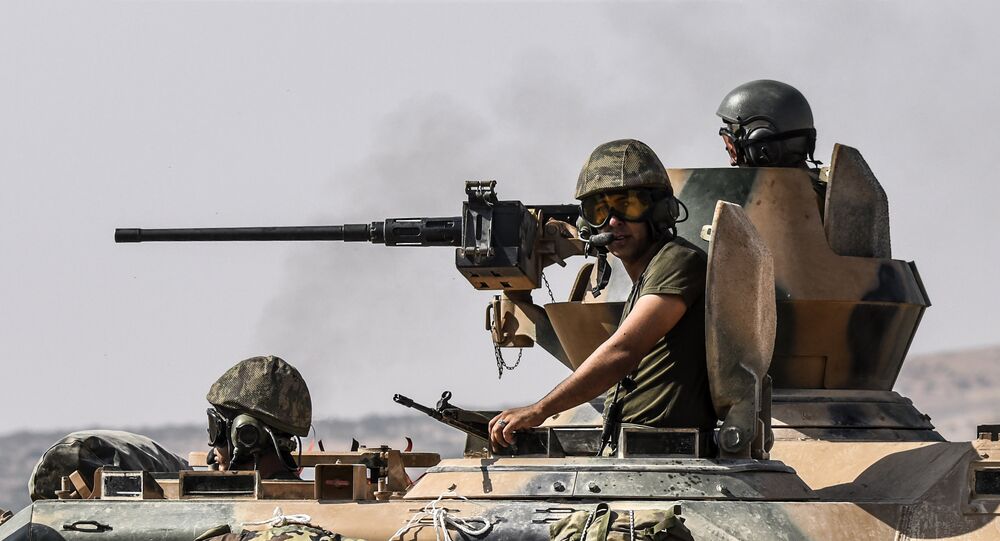 Russo-Turkish cooperation in Syria may take on a new significance given the ongoing frictions between Ankara and Washington related to Turkey's "Euphrates Shield" operation, experts note.

Russo-Turkish rapprochement has put Washington under a lot of pressure, forcing the Obama administration to re-consider the US' military strategy in Syria, Salman Rafi Sheikh, political analyst and expert on Pakistan's foreign affairs, writes.

"Many in the US policy making circles believe that the US does strongly need to boost its military operation in Syria against Assad," Sheikh notes in his article for New Eastern Outlook, stressing that the reason for this is "the possible enhanced military co-operation between Russia and Turkey."

© AFP 2021 / BULENT KILIC
You Shall Not Pass: Turkey 'Wants to Control 100Km Corridor' on Syrian Border
The analyst puts the spotlight on the Russo-Syrian decision to turn Hmeymim Air Base into a permanent fully-operational Russian military base. The agreement was ratified following the Russo-Turkish rapprochement this year, despite the fact it was signed in August 2015 by Moscow and Damascus, he stresses.

"Without doubt, a fully operational base in Hmeymim, which is located virtually on the Turkish border, signifies a major geopolitical decision that factors in the Russian-Turkish rapprochement," Sheikh underscores.

On the other hand, Moscow and Ankara have established a "mechanism" which comprises the countries' foreign ministries, military and intelligence officials and aimed at tackling the Syrian issue.

In his previous opinion piece Sheikh explained that Ankara has stepped in to Syria partially because Washington allowed the Kurdish People's Protection Units (YPG) — the Pentagon's allies in the fight against Daesh (ISIS/ISIL) — to gain ground in northern Syria in close proximity to the Turkish border.

Ankara regards the Kurdish expansion in northern Syria as a direct threat to Turkey's national security.

© Sputnik / Mikhail Alayeddin
Sectarian Bloodbath: Washington Has Opened Pandora's Box in Syria
Sheikh recalled that back in May Ankara obtained assurances from Washington that once Daesh was defeated in Manbij, the Kurdish militia would return to the eastern bank of the Euphrates.

Instead, US policymakers turned a blind eye to the YPG signaling its intent to move westward to bring other northern Syrian territories under its control, Sheikh wrote.

"While Washington was ambivalent over Turkey's 'red line' [for the Kurdish militants]… Turkey has decided, finally, to present Washington with a fait accompli" and launched the Euphrates Shield operation on August 24, Sheikh elaborated.

"While the White House was preparing to consider a secret plan to have American special forces join the Turks, Ankara pulled the trigger on the mission unilaterally without giving officials in Washington advance warning," the media outlet revealed last Friday.

© Sputnik / Michael Alaeddin
Situation on the Ground in Syria 'Has Begun to Resemble a Global War'
Likewise it appears that the Pentagon didn't expect Turkey clashing with the Kurdish-dominated Syrian Democratic Forces (SDF) in northern Syria.

The US Department of Defense rushed to denounce Ankara's military actions against the Kurdish militants in the region.

However, Turkish Foreign Ministry spokesman Tanju Bilgic responded that "such statements are by no means acceptable and that they do not comply with the alliance relationship," Hurriyet Daily News reported.

A day later, Turkey's EU minister and chief negotiator, Omer Celik officially denied the US narrative that Ankara reached a ceasefire agreement with the YPG in northern Syria.

"The Republic of Turkey is an independent, lawful state. It cannot be evaluated as if they [Turkey and the YPG] are equal and there was an agreement between them," Celik told state-run Anadolu Agency on August 31.

© Photo : Hikmet Durgun
US at Pains to Calm Tensions Between Its Allies in Northern Syria
Furthermore, on September 1, Erdogan highlighted that the US' claims that the YPG is retreating to the eastern bank of the Euphrates bear no relation to reality and should be confirmed by Turkish intelligence first, Daily Sabah wrote.

Commenting on the ongoing frictions between Ankara and Washington, Russian media outlet Nezavisimaya Gazeta suggested that Turkey may shift from Washington to Moscow to solve its security dilemma.

Speaking to the media outlet, Veniamin Popov, Director of the Center for the Partnership of Civilizations at the Moscow State Institute of International Relations (MGIMO), emphasized that Russia has been pursuing clear goals since the very beginning of the conflict in Syria.

Moscow has repeatedly called upon major players in the region to team up in order to defeat Daesh, he recalled.

"The alliance of Turkey, Iran and Russia may drastically change the situation on all fronts [in Syria]," Popov emphasized, adding that the Americans also understand that they need a broader coalition to eradicate terrorists on the ground.

For her part, Anna Glazova, Deputy Director of the Russian Institute for Strategic Studies (RISS), predicted that US-Turkish relations would further deteriorate.

"If Turkey continues its offensive [against the SDF] it will face a tougher response from the US. The relationship between the two allies is getting worse. To complicate matters further, besides the Kurdish issue there are other contradictions which are unlikely to be solved [by the US and Turkey] in the near future," Glazova told Nezavisimaya Gazeta.